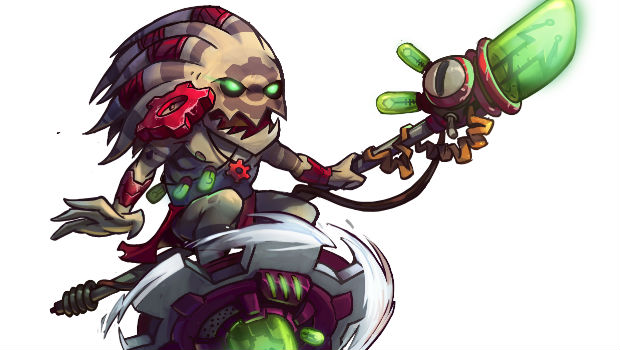 Ever since Skree was announced earlier this year for Awesomenauts, I’ve wanted to play him. With his cool looking hover-board and Predator-like design, he always looked like a ton of fun to play. Well now you can give him a shot, so long as you have the Starstorm expansion installed.

He’ll have a lightning rod at his disposal for his core attack, as well as saw blades and a magical totem. His primary attack is a chain lightning of sorts, the saw blade can hit multiple enemies as well, and the totem blocks off escape routes.

All in all he seems like a pretty technical character, so I can’t wait to try him out. In addition to Skree, there’s also an AI Editor update, as well as general re-balancing. Here’s what’s left for Starstorm — an online spectator mode, a new map, global chat, and another fifth expansion character.