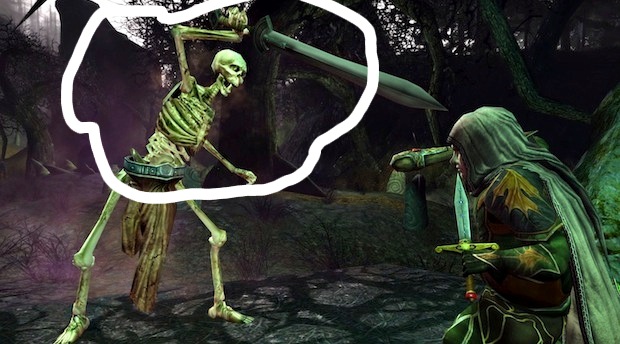 We’ve seen the next Lord of the Rings Online expansion through a plethora of tree-filled still images and even via a creepy-old-lay-elf-narrated teaser trailer, but that doesn’t mean we’ve seen it all. In fact, judging by that skeleton, a creature with nothing in common with the color green or trees trees, it becomes easier to say that we haven’t seen the half of it.

Earlier this afternoon, Turbine blasted out a new batch of fresh images showing off the Scuttledell region within the “Siege of Mirkwood” content. While there are indeed trees, one also gets a good, solid look at several monsters — skeletons and Giant Spiders included.

Our resident Tolkien dork took the day off to play around in the local park this, so we can’t identify any of these creatures. But, it doesn’t matter in the scheme of things. “Siege of Mirkwood” is hitting soon — like, December 1st soon. Prepare MMO, people.