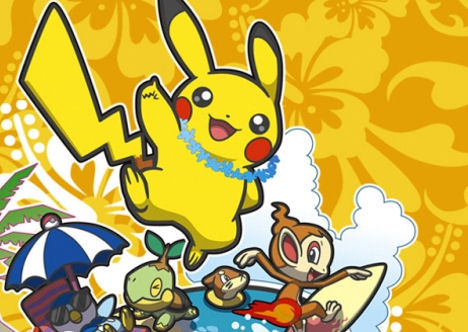 Believe it or not, I really like Pokémon. I’ve been a big fan of the series since I was a child, but even though my interest in the series diminished as I got older, I still find myself dipping back into the monster-catching stupidity now and then. I recently picked up Pokémon Pearl for my DS Lite, and have already lost hours upon hours doing the exact same things I did in Pokémon Red almost ten years ago, yet still loving every shameful, childish second of it.

But not all is glory and sunshine in Pokémon Land. Despite its enduring quality and innocent fun, there are certain parts of the Pokémon franchise that just bother me, digging under the skin like some sort of vile tick. If I am honest, Pokémon confuses and frightens me in a way that only a game that ostensibly glorifies cockfighting can. Here are six ways in which Pokémon really bothers me.

In America, there is a widespread belief that free healthcare is a wondrous and desirable thing, something that America needs in order to become a civilized example of humanity in the world — this is WRONG, and games like Pokémon only make that flawed thinking worse.

Speaking as a Brit, I can confirm that our National Health Service is so bad, it’s actually considered crueler to treat the cancer rather than just let nature take its course. British hospitals will make you sicker coming out than when you went in. It’s understaffed and underpaid, and the waiting lists are astronomical — if you’re on the NHS, expect to be dead before a doctor will consider your case serious enough to see you straight away.

Not so in Pokémon Land — if your Pokémon are even slightly bruised, you can just take them to a Pokémon Center and have their ailments quickly and efficiently cured in a matter of seconds, completely free of charge. Pokémon Centers are an idealist’s view of the NHS, one that is sadly unattainable in real life. Free healthcare is a great idea, and I’m no fan of the other extreme either, don’t get me wrong — but Pokémon is damaging us all by pretending that the NHS is just that good. If it were accurate, you’d have to wait a year between battles before your team is fully recovered, and even then, one or two of the buggers will have contracted SARS.

2. The whole world revolves around Pokémon:

Now, I get that the game is about Pokémon and all that, but does everyone — everyone in the entire game world — have to care that much about the little bastards? I get it, Pokémon are cool and funky and have beaks sometimes, but does every single bookshelf in the world have to be “full of books about different types of Pokémon?” Does every show on TV have to involve them in some way? Does every person in every town need to have something utterly profound to say about what their fucking Magikarp likes to eat for breakfast?

For a place full of penguins that can say their own name, the world of Pokémon must be, in actual fact, the most boring place on Earth. There are no TV shows about anything else, no books that broach any other subject. It seems that hobbies and interests concerning things that aren’t related to Pokémon in some arbitrary way have been banned by the government. It’s George Orwell’s 1984 all over again, except now revolving around turtles with trees on their backs.

It makes me cringe. Every time I approach some new character, I naïvely anticipate him surprising me with a frank discussion about Ayn Rand’s views on sexuality, or to show me his collection of rare Velvet Underground LPs, but no … no, he’s just going to tell me that he loves Psyduck. Again.

Just once I want a character to say “You know something? I am sick to death of Pokémon!”

Tell me, how did the moron who owns nothing but level 5 Rock-type Pokémon rise to a position of prominence in his town? Is it a place populated entirely by people so stupid that the village idiot is a brick? I’m supposed to believe that the man who thinks composing a team that has two Geodudes in it instills fear with every mighty footstep he takes, and quite frankly, I don’t.

Throughout the game you are reminded of this one simple fact — if your team consists of one type of Pokémon, you are going to get screwed eventually. It would seem that your role is actually that of karmic truth, as you teach that very lesson to all the idiot Gym Leaders who ignored the advice you got five minutes into the bloody game.

Oh sure, the second I hear that the next guy uses nothing but Water-types, I am looking at my Grotle and literally shitting myself with terror. And tell me, HOW can you be a trainer for so long and not even have your Pokémon up to level 10 yet? Are you a fool? Are you a stupid fool?

I mean honestly … what the Hell?

5. There’s a difference between Pokémon and dogs:

Even though there are Pokémon that look, act and sound like dogs, they are not dogs. Similarly, dogs are not Pokémon. Pokémon are split into different subspecies and types, yet are distinct from animals. And I don’t understand how. It’s just like trying to divide by zero, is attempting to understand what makes a Pokémon different from a dog.

It’s never explained enough for my liking why an Eevee can learn Tackle but your common household Alsation can’t. If you threw a Pokéball at a monkey, would it get trapped inside? If not, why does it work for Chimchar? How did these Pokémon even start looking like other animals?

Also, how come nobody is ever shown cooking and eating a Pokémon? It would happen in real life, wouldn’t it? I intend for no offense to Mereep fans, but if you’re going to walk around looking like a delicious sheep, then you’re just asking for trouble.

6. The game is needlessly complex:

I consider it a fallacy that Pokémon is intended for children. While it looks like innocent playground fun on the outside, beneath its plush surface lies an eternity of statistics and arcane secrets that have been known to make sane men mad and mad men sane within mere minutes.

I refuse to believe Pokémon is for kids. You need graphs and charts and ancient runes to make sense of it all. If I’m on the bus and my Bidoof wants to evolve, I’m stuck — I don’t know if letting the little furry monster evolve now will mean he won’t learn an important move later. Why do they do that to you? Why make it so keeping a Pokémon unevolved for several levels might be of benefit in the future? That just makes you frightened of evolution, and Dr. Richard Dawkins would laugh at you if he heard that!

Pokémon fills your head with too much knowledge. I now know that breeding an Alakazam with a Medicham will create an Abra capable of learning Fire Punch. I will NEVER need to know that much information about anything else in the world! There are professional hostage negotiators out there who will not have put as much effort into learning their trade as some four-year-old is expected to put into small drawings of animals. This is why children grow up stupid nowadays — it’s not that they’re incapable of learning, it’s just that their small brains have become completely filled by mental maps showing them were all the Rawst Berries are planted.

Pokémon has doomed us all.

But I do know where all the Rawst Berries are!