[Destructoid turns 7 on March 16, 2013! I’m celebrating early by repairing some of my favorite articles from our WordPress days. You’ll be able to browse this original collection soon — “Destructoid’s Golden Archives” is hereby instituted to preserve the best work of our former editors. It’s also nice to see Burch on the home page again. -Niero]

Hot on the heels of Faith’s article on the layered evils of Viva Pinata, this article serves to educate the average reader on the numerous moral trespasses and hidden agendas of Super Mario, and his ilk.

Will you have noticed some of these things before? Undoubtedly. But have you noticed ALL of them? Unlikely.

1. Where do mushroom powerups come from?

Consider the following. The Mushroom Kingdom is so named because the majority of its denizens have very mushroom-shaped heads. Toad, and his hundreds of identical brothers who consistently manage to get kidnapped in Bowser’s castles, have heads that are essentially mushrooms with eyes.

But what about the mushroom powerups that Mario consumes in order to get bigger, or gain an extra life? What do THEY look like? Well, mushrooms. But where do these mushrooms come from? Even after jumping through more than half a dozen worlds in the mushroom kingdom, have you seen a SINGLE mushroom FIELD? One can then only conclude that these powerup mushrooms are not created naturally, but are in fact artificially made (and then evidently put into large question-marked boxes).

What conclusion can we draw from these facts? Simple.

MARIO IS EATING THE DECAPITATED HEADS OF THE MUSHROOM PEOPLE.

2. Super Mario Bros serves as an allegory for the Bolshevik Revolution.

This one we’ve all heard before. Red outfit, Stalinesque mustache, star on the flag, overthrowing an empire. Yeah, yeah. I only mention it to state that the kind of people who bring this up in regular conversation with their friends are probably the kind of people who get made fun of when they aren’t around. So be sure not to do that.

He’s fat, he’s a plumber, he’s got a mustache, he speaks broken English, and he’s pussy-whipped.  The only way Mario could be any more of an Italian stereotype is if he had to eat pasta instead of mushrooms, or if he shot people in the back of the head and dumped them in the Hudson Bay.

Now, I can understand that Charles Martinet’s voice acting can be pretty cute at times, but honestly. Despite what Nintendo thinks, there are Italians in America who are capable of saying “It’s me, Mario” without adding the letter “A” to the end or beginning of every single goddamned word.

And despite the fact that he’s a plumber, has anyone ever seen him do any plumbing? At all? He can go down enormous, man-sized pipes, yeah, but he doesn’t even carry a goddamn wrench, much less an assortment of tools necessary to perform any degree of adequate pipe maintenance. The job description just seems to paint him as another member of the stereotypically blue collar, working class immigrant population in America. Which says something about how Japan views the US. 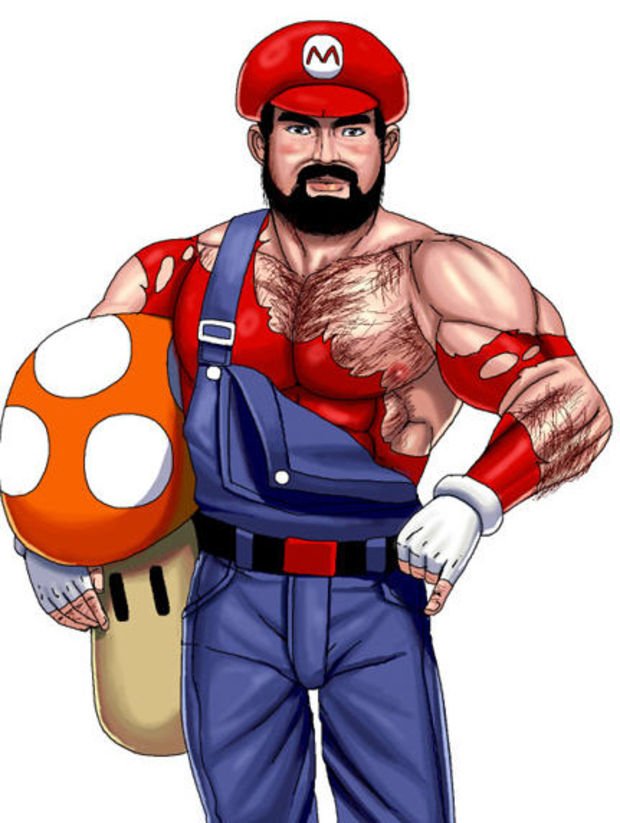 It may have taken some of us longer than others to make the connection, but at some point Mario’s innocent mushroom and flower powerups begin to take on a much more sinister, substance-abuse-related-meaning. Consider the mushroom powerup in relation to the famous drug-use song “White Rabbit”:

“One pill makes you larger.”

“One pill makes you small.”

And what about the fire flowers? Even disregarding the obvious drug implication, how was Mario supposed to use the flower to shoot fireballs? Did he just hold it? Eat it? Put it in his pocket or something? Or how about the leaves that turn you into a raccoon? Is there ANY connection between touching a leaf and turning into a raccoon that you can see? Anything at all? The only rational answer is that all of these “transformations” are nothing more than visual and auditory hallucinations, brought on by heavy drug use. The mushrooms Mario is so fond of are of the “magic,” hallucinatory variety, the flowers he eats to produce fire are obviously some sort of illegal poppy blossom, and the magic leaves that make him turn into a flying raccoon…well, you figure it out. 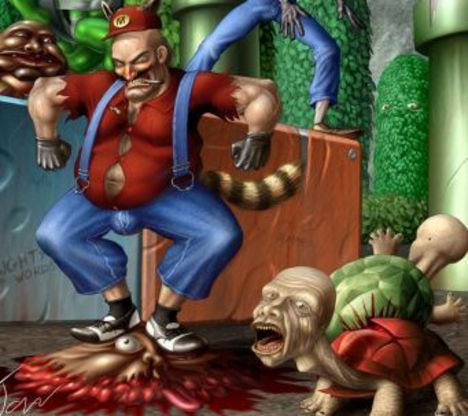 See? Not so fun from the Goomba’s position. Now, regardless of whether or not the Goombas are actually working for Bowser, they certainly don’t seem like killers, or even soldiers. They walk around aimlessly, and if you touch them, you get hurt. Is that worth killing over? It’s not even like they attack Mario once they see him: they just walk back and forth along a predetermined path, and if Mario touches them, it’s his own fault. But, instead of doing the merciful thing and avoiding them, Mario takes it upon himself to stomp every last weaponless Goomba to death, for no good reason.

Actually, when you think about it, Mario’s got it pretty easy: almost none of his enemies actively try to attack him, so the only thing he really has to worry about is falling down bottomless pits and getting hit by Bowser’s traps. And, really, how hard is it to avoid non-sentient weaponry?

That being said, I shed no tears for the Hammer Bros. They can go to hell.

[Picture credits: The first, gross painting is from this guy , the burly Mario is from here , and the goomba comic is at Lifemeter . Everything else is either google searched, MS Painted, or really obvious. Update: Additional evil mario photos were added to the gallery.]