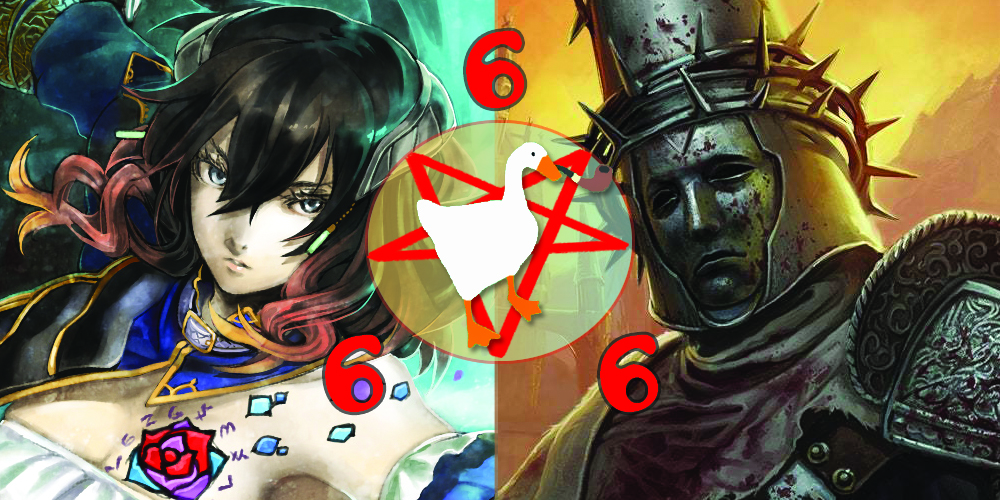 Halloween is a weird one. Once considered a Pagan holiday that celebrated the connection between the world of the living and the dark worlds of hell, it’s morphed into a celebration of being benignly “bad” in a variety of ways. If being holy means “following the rules of religion,” then this is the day to break all those rules. Pull tricks. Be a monster. Eat all the candy. Dress up like sexy Toad. That all might feel sinful on a normal day, but on Halloween, it’s A-OK. In fact, it’s encouraged.

There were at least six games in 2019 that similarly defied traditional Godly sensibilities and now seems like the perfect time to talk about them. Quite a few of them went largely unnoticed upon release, so you may even stumble upon a few surprises. So if you’re looking to celebrate Halloween with a new game or two, you may be in for a treat.

Bloodstained: Ritual of the Night “The Girl With The Demonic Tattoo”

Maybe it’s because of today’s particularly spoiler-avoidant culture, but not a lot has been said about Bloodstained‘s story. I’m surprised by that because it’s quite a story! I mean, how many games are there about [SPOILERS] women who steal powers from demons by absorbing artwork into their skin before discovering that the local exorcist is actually trying to summon the devil? [END SPOILERS] Exactly two by my count, and the fact that they were both produced by Koji Igarashi can’t be a coincidence.

There’s also an element of torture that sort of gets glazed over when people talk about the game. Each and every time that Miriam gets a new “shard,” she is stabbed through the torso with it and she screams in pain. It’s like The Missing, except no one seemed shocked by it. I have to guess it’s because people just sort of glaze over the stories in these sorts of games, too busy focusing on the copious schlock and old-school design decisions, but Miriam is low-key one of the most anti-establishment game heroes of 2019. Tortured by crypto-magicians, despised by the church, and generally rebellious against all expectations, she’s a role model for other witches and weirdos everywhere.

In some ways, this is the game that I wish Bloodstained was; beautiful 2D animation, tons of genuinely stomach-turning moments, and a commitment to its message that borders on pathological. While Bloodstained failed to shock people with its depiction of a woman being stabbed with a large sharp object, Blasphemous takes the same concept and literally drives it home, opening with a shot of a woman impaling herself on a religious statue in a truly gruesome manner.

This leads to a global religious event called “The Miracle” that basically turns the entire world into a massive Catholic church on steroids. Divine guilt and sin are everywhere, and most of the time, they look nearly identical. Is that giant suffering freak of a mid-boss punishing themselves out of a sign of devotion, or simply a monster that wants to kill everything in their path, including themselves? Or both?

As the Penitent One, it’s your quest to find out, but you’ll do plenty of suffering yourself in the process. It’s only a few minutes into the game that you fill your helmet with blood and dump it back on your head, drowning yourself in the fluids of your peers. That’s just the price you pay when repenting to a God who sees suffering as currency, in a world where you are the one true hero tasked to brutally murder any and all comers in the name of the lord. While the game itself is filled with unwaveringly pious people (at least by their standards), the message it sends about religion itself is not nearly as flattering.

This is another 2D action-exploration game, though it takes less after the classics from the Belmonts and more from the past ten years of From Software’s catalog. You start off as a member of the Templar, a group of Paladins carrying on their own brutal crusades, owners of a city-state that the lost souls of the land are drawn to “like moths to a flame”. Before you know it, you’re cast down to the Filthblood shelter and stripped of all your knightly garb, shamed for being a failure, tasked fight for your life against an array of bizarre horrors and occasional leather daddies.

On the surface, it’s not the same level of extreme expression of the least savory aspects of the Catholic doctrine as found in Blasphemous, but under the hood, it’s arguably just as insidious. Most enemies can be pretty easily avoided with the dodge roll, which is tempting considering how cutthroat the whole experience is, but if you did that, God won’t help you. Only by killing can you collect “prayer points” which are spent like currency at designated spots with your dedicated kneel and pray buttons, used to gain new weapons, heal your wounds, or even open doors.

Why does God reward you in these relatively mundane ways for hunting down wretched sewer dwellers and other assorted horrors? For an answer, I’m reminded of the old German proverb “Well, if you won’t be my brother then I’ll bash you in the head.” At least, that’s how things seem at the start. By the end, the difference between light and dark isn’t as clear.

Sea Salt “Dagon For A Day”

Things are less ambiguous in this wholly unholy story. Things start off with a High Priest in prayer, but much to his surprise, his words are answered directly by the all-powerful. His lord Dagon demands that he sacrifice his own life as tribute. He refuses, stating that he’s too important to the church to die, but Dagon knows better. Summoning hordes of giant worms, ghoulish foot soldiers, giant crabs, and Old Testament plague-type stuff as he sets off to destroy the priest, his supporters, and any innocent villagers that happen to get in his way.

Like in Dark Devotion, Sea Salt also lets you collect points from dead enemies to be used to have prayers answered, except this time, you’re basically praying to yourself. As Dagon, the world is a small, ridiculous place where you feel no remorse in wreaking havoc, in part because you’re never at risk. It’s just for you to point, click, and let your army of revolting parasites do the work for you.

Astrolagaster “Sex Doctor Of The Stars”

Did you know some who take the Bible literally see Astrology as a terrible sin? According to Deuteronomy 4:19, it’s a really bad one. The passage states “And beware not to lift up your eyes to heaven and see the sun and the moon and the stars, all the host of heaven, and be drawn away and worship them and serve them, those which the lord your God has allotted to all the peoples under the whole heaven.”

So by those standards, real-life “Medical Astrologer” Simon Forman was about as sinful as they come. In 1592, he claimed to have actually cured people of the same kinds of plagues that Dagon utilizes, using only the stars to guide him. Astrologaster puts you in Simon’s place, tasking you to read the night sky to cure, advise, or intentionally mislead patients, depending on where your internal compass guides you.

In real life, Simon also slept with at least a few of his patients, which is definitely a sin in the eyes of the modern medical world. He also ended up on trial for murder after he was dead, where the high barrister referred to him as “Devil Foreman”, which I’m pretty sure is also the name of a videogame boss somewhere. No matter where this man turned, he ended up ostracized, but someone made a videogame about him 400 years after he was born, which is better than most of us can probably say.

“You do not have to be good. You do not have to walk on your knees for a hundred miles through the desert, repenting. You only have to let the soft animal of your body love what it loves”. These are the opening lines from Wild Geese, a poem by Mary Oliver. I don’t know if they influenced the creation of Untitled Goose Game, but it’s clear that they are both cut from the same cloth.

Causing trouble in town isn’t the only thing that some think this bird does wrong. Some are even coming down on the game for featuring gameplay, which they think is too much work. To that I say, everything about being alive could be considered work. Everything you do when moving forward through linear time involves consuming and burning energy. We have no choice in the matter. Existence takes effort.

The real question, are those efforts exciting or anxiety-inducing? Are they shackling or empowering? Are you doing what you have to do, or what you want to do? In Untitled Goose Game, the answer is easy to find. Rebelling against various systems by lackadaisically pursuing joyful acts of mischief is, in fact, pretty fun. These are the sins of the goose, in the eyes of some electronic entertainment academics, and the in-game villagers who continually run afoul of the pranks of this chaotic waterfowl. Not satisfied to do as others want, or as others expected, it is paving the holy path for relatively defenseless waddling white-feathered flocks everywhere.