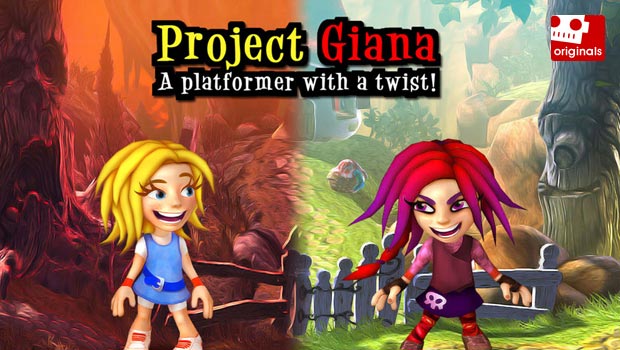 Hailing from Norway, Audun Sorlie is passionate about game music as an editor on OSV and writer for various magazines around the world. Following up on his post earlier this month about Project Giana, Audun’s been able to speak with the team to get some special insights into the project.

Project Giana has been buzzing online for almost a month now, promising to deliver a fusion of nostalgic simplicity and modern mechanics together in an all new adventure starring the legendary Euro girl. Giana Sisters is most famous for its blatant facsimile, bearing enough resemblance to Super Mario Bros for Nintendo to take it off the market through legal means. But Giana Sisters was more than just a copycat. Beneath it all was a very unique quality. The music was brilliant and ahead of its time, and the game itself held a certain charm that has kept it very much alive in the many hearts of Commodore 64 aficionados.

After talking with the development team at Black Forest Games (BFG) and playing through a two-stage demo, I was so impressed that I came up with six reasons why I think you should check out their Kickstarter campaign and give Giana another chance. We’ve also got our hands on exclusive screenshots and streaming music samples for your enjoyment.

#6: Creative take on a classic genre

The name of the game is still collecting crystals and avoiding danger by stomping on your enemies, but the sisters’ arsenal of moves has greatly increased. As “Cute Giana,” you have the ability to twirl into a glide to cover long distances and maneuver more safely and precisely, while “Punk Giana” has a much more aggressive wall breaking/bouncing dash attack, handy for navigating tight spaces. It is the interplay between the two personalities and the worlds that make Project Giana unique as the rapid change between worlds and calculated use of the individual skills makes for an exhilarating experience.

Vladimir Ignatov, Senior Producer of Project Giana explains the fresh take on the franchise as follows:

“In the original game, the Giana sisters are two girls who found themselves trapped inside a nightmare. In order to get out, they needed to find the giant diamond. Now Giana is a teenage girl who is again trapped in a twisted dream. Because she is in a stage of her life that is all about transformation she learns how to manipulate her dreams. Through the legacy of the previous Giana games, we tried to emphasize that aspect, symbolizing the transformation of a teenager as she comes of age. This stage in life is all about the inner conflict of rage and self-confidence.”

“For our new Giana game, we really wanted to bring something fresh and new. Doing another clone wasn’t an option for us,” notes Creative Director, Jean-Marc Haessig. The team started by thinking about what made The Great Giana Sisters outstanding and different from the game it was trying to emulate at the time, Super Mario Bros.

After the idea of her transformation into a punk girl version of herself was settled, they toyed with the idea that, in addition of the dream world around her changing, how that might affect gameplay. They started prototyping the environment morphing and thought about switching Giana’s abilities, the enemies and obstacles. With the first playable version, they realized that it turned out being really fun.

Ignatov further explains, “We decided to expand Giana’s duality to everything in the game, and to make both facets equal instead of one being the upgrade of the other. Then we experimented with that concept, trying out what different things we could do with the dream twisting, while keeping it true to the original gameplay. This was the point where the Giana prototype drifted dangerously far into puzzle territory at some point, because the world warping lend itself well to that kind of gameplay. But we managed to pull back. Being a platformer is part of Giana’s identity after all … even though she started out as a clone once, we wanted to focus on what made Giana unique.” 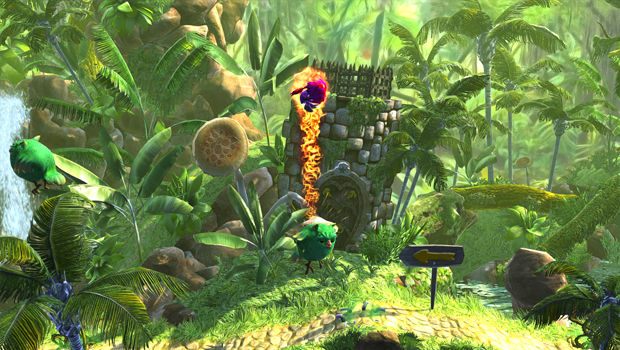 The world of Project Giana feels truly alive. It oozes charm and detail that makes her every step as interesting as the next. The demo we played shows off some lavish landscapes, full of vibrant colors and accentuated animations, hearkening back to the days of truly inspired sidescrolling platformers.

Regarding the freedoms afforded the team when self-publishing a title, Haessig explains: “Giana is our baby, and because it’s self-funded so far, we’re not restrained by publishers. I think that is the best part on creating a game independently. There is no one telling you how you should do it. We know that other famous platform franchises don’t evolve that much these days because of IP limitations. In our case we knew in advance that the game will play unlike anything you have played before. That and the chance to work on the game for the core audience, players like myself, who grew up on the classic platforming games that were truly awesome

Some loyal fans have noted the art style has seen a drastic change from the DS game in 2009, but when asked about this, Ignatov gets right to it: “Our artists were very vocal about that. They tried morphing between the dreams with 2D art and didn’t like the result.”

Haessig further adds, “When we started thinking about the twist, we really wanted to support the concept by a gorgeous morphing world. While it would be possible doing that with animated 2D graphics, 3D allowed us to implement a real-time morphing based on a technology we developed earlier for other projects and the experience of our artists.”

#4: A high quality production from start to finish

Playing Project Giana, you really get a sense that a lot of thought has gone into the game, be it the spot on swap system of the dual dream worlds, the seamless transition of the music, or the stylized art direction and graphics.

Ignatov touts, “For the engine, we wrote almost everything ourselves. The framework is completely our own, including most of the rendering, sound and animation. Generally, we split the game into the separate game systems (rendering, physics, audio, input, game logic, interface, tools, etc). The game logic library drives the core of what the game ‘is.’ We try to isolate this area from the others and have people focus on as much ‘pure’ gameplay without having to worry about things like how to draw the objects.

The biggest challenge for writing a game like this is to make it properly multiplatform. Since every platform has a different set of demands on the game, a specialized binary exporter pipeline allows to do fast and efficient loading of data on all platforms. We can also load/unload select assets on the fly to allow for faster turn-around times during production. We’ve designed most game systems to be mostly platform-agnostic, which frees most programmers from dealing with the common headaches of multiplatform development (such as endianness swapping, threading issues, etc.)” 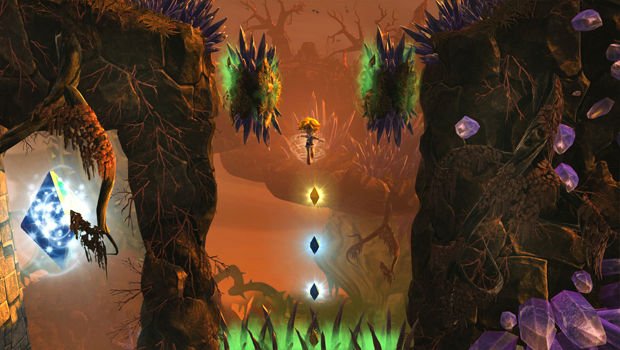 One of the best aspects of this game is the music. Giana Sisters has one of the Commodore 64’s most legendary soundtracks, composed by game music legend Chris Hülsbeck, who returns to score this new game alongside his longtime friend Fabian DelPriore and Swedish C64 rockers Machinae Supremacy. The dual layered sound of the dual dream world doesn’t just make for an excellent soundtrack, it also makes the music an interactive part of the game itself.

“[Hülsbeck’s] music is highly recognizable and was one of the most appealing and memorable elements of the original game. We’re also very excited to have Machinae Supremacy on board: their chiptune metal is ideal for Giana’s angry ‘punk’ side,” says Ignatov of the game’s music.

DelPriore adds “Chris had the idea of switching the music seamlessly from mild to wild and back, using the typical cute Giana melodies and the melodic heavy metal sounds of Machinae Supremacy. The way it is done is to produce both music pieces, and layers, at the exact same tempo and arrangement structure. During gameplay, the layers are running side by side in perfect sync and speed and are cross-faded from one to the other when switching worlds. This ensures that the switch is as smooth as possible. Some elements of the music, like similar or even the same chords and melodies, are being mixed into both layers to further blend the two styles.”

Let’s face it, the key to a successful Kickstarter campaign is awesome rewards, and the Germany-based team at BFG truly know how to throw a party. From the simple pledge of the digital release of the game, to an art book by the incredible artist Pikomi, original soundtrack albums, and even a “pillowl” plushie, there is a pledge for every level of interest, ensuring a happy costumer. You know it’s a good deal when the cheapest option lands you the game itself. 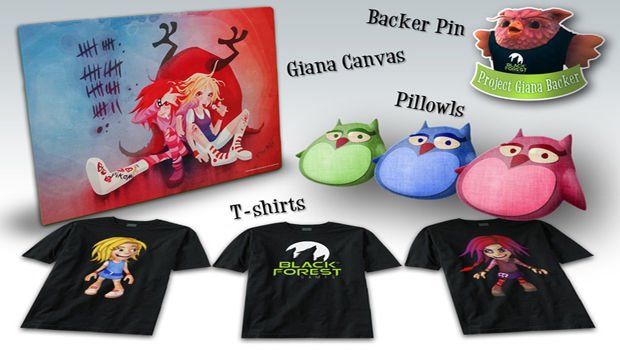 #1: Brush up on your your gaming history!

Giana Sisters is a game with a legacy of great nostalgic memories. A lot has changed since Giana’s first appearance in 1987, which is today a fabled tale of both unquestionable plagiarism and undeniable charm.

Ignatov wanted to conclude with this reflection:

“How do you retain a game’s history and identity? The first step would be to determine what made Giana Giana. We also checked whether those key elements would be distinctive from other platformers. Even when she started out as a clone once, we wanted to focus on what made Giana unique.”

Adrian Goersch, Managing Director at BFG adds, “There are not many well-known German brands from the beginning of the gaming era. The Great Giana Sisters is one of those. In a way that is our legacy. To honor it, we think our task is to create a state of the art game with the same fun factor that the original Giana Sisters had. The potential is there, because we didn’t want to continue that particular Giana legacy by copying current platformers. We wanted to bring something new to the genre.”

So there you have it, Project Giana is truly a labor of Euro love. If you’re still on the fence whether you should fund or not, the public demo is out now to spike some last minute interest. The game is scheduled for release on PC, Xbox Live Arcade, PlayStation Network and OUYA, though a Nintendo Network release is not ruled out entirely.

According to Ignatov, “To be honest, we’ve been tempted by Nintendo’s new hardware and put some thoughts into a Wii U port. With a handful of core third party titles that are already confirmed for Wii U, the console positioning seem to be in-line with Giana target audience and it would be reasonable for us to release it there. It goes without saying it would be great honor for us to stand shoulder to shoulder with these great Nintendo platformers. Right now we are focusing on the other services however.”

The Kickstarter campaign is still running for a few more days. So far, the game seems to be shaping into what could be one of the most unique and original platformers in several years.