Ghost of Tsushima is an open world game with upgrade trees, sidequests and a deep combat system.

It’s easy to get lost, but here are a few tips to help you get started.

Prioritize your resolve meter for healing

Your resolve meter is essentially your MP. You use it for anything from special moves to healing, which is your main source of (instant) healing.

It’s important to manage your resolve during any fight to ensure that you always have one left for an emergency heal. Likewise, if you have full resolve and have health to spare, use the resolve you have before you lose it. Top up your health or use a sparing special — anything to keep your resolve below the max.

Killing enemies and parrying attacks will bump up your resolve mid-combat.

In order to level-up your resolve meter, you’ll need to either raise your legend (your general XP bar, earned from quests) or defeat a certain amount of bamboo slicing challenges.

When you first walk up to a bamboo event it might look daunting, but it’s simpler than it seems. See all of the buttons on each piece of bamboo? You press them in sequential order, top to bottom. That’s it. You have a small window of time to actually press every button sequentially before you fail that particular level, but you can retry it as many times as you want.

Equip the traveler’s attire when you’re roaming around

Early on in the game the main story quest will give you the “traveler’s attire,” an outfit that is essential for open world roaming.

When you’re out and about, said attire will allow your controller to rumble when you’re near a key collectible. Try to get used to using the traveler’s attire at all times when you’re not doing a mission or are in a big fight. You can swap outfits at any time in the pause menu, or change the direction of your current objective to favor collectibles, making the most out of the attire’s latent power.

Improving your armor can net you new cosmetic options

It’s not obvious at first, but if you want to expand your cosmetic options, you’ll want to upgrade your armor pieces.

Pretty much every set of armor is worth wearing in Ghost of Tsushima, so if you see one you like, upgrading it once or even twice should net you immediate gains. Try to keep a combat suit (samurai armor) and a non-combat suit (like the traveler’s attire) on-hand at all times.

Your first upgrade should be the kunai

The kunai is one of the most effective tools in the game as it can be used to secure quick kills on high-priority targets.

When you get the opportunity to buy your first ghost upgrade, go for the kunai and even level it up a bit. You won’t regret it: it’s instant and very easy to trigger in the thick of things. 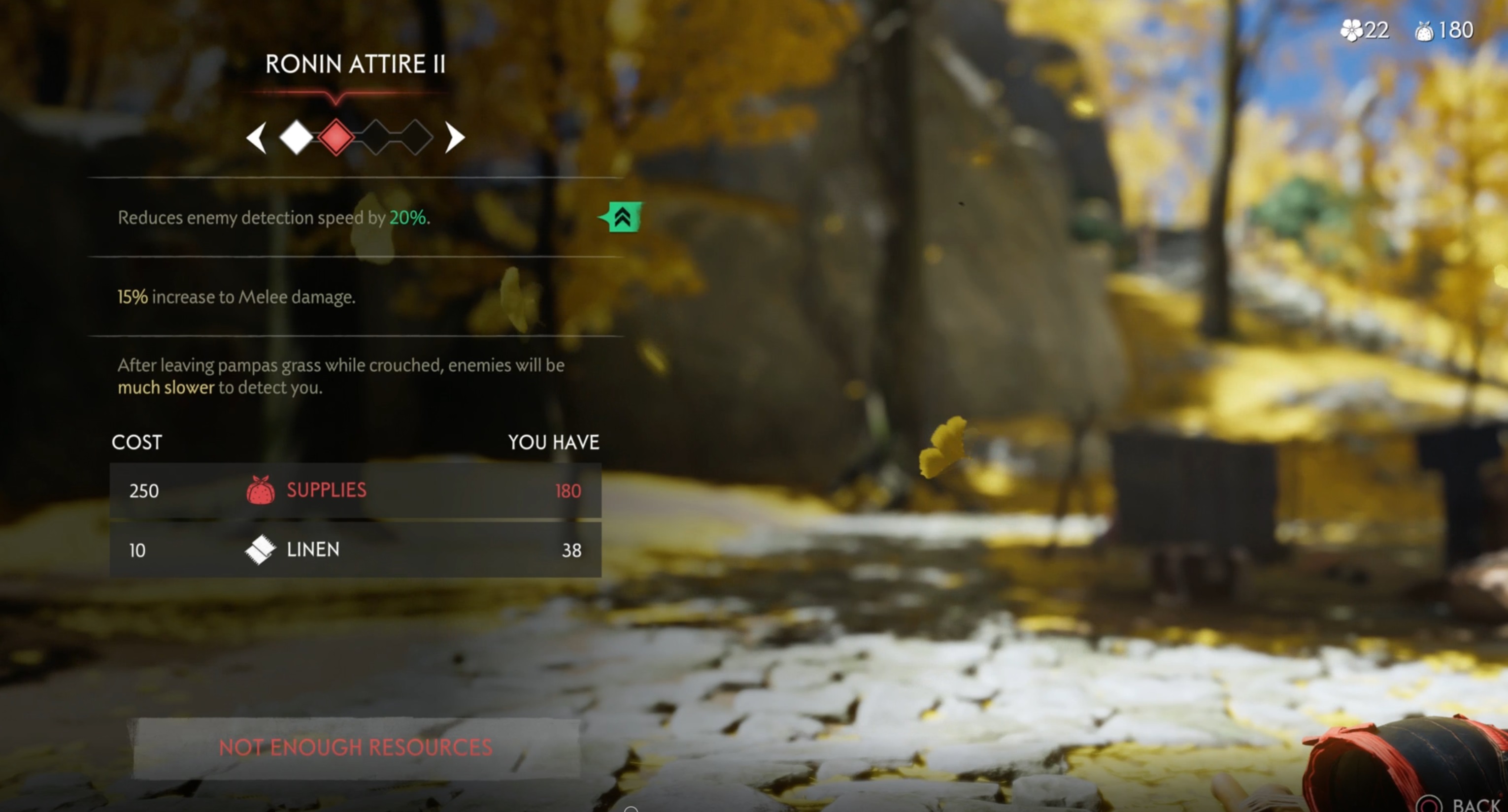 Supplies impact just about everything in the game

Although there are a ton of different currencies to juggle in Ghost of Tsushima, “supplies” is the one that rules them all.

A catch-all of sorts for a general currency, every major upgrade requires supplies. If you see them, make sure you grab them. If you’re upgrading something, make sure you have enough supplies for the upgrade you really want first before you spend your entire stash.