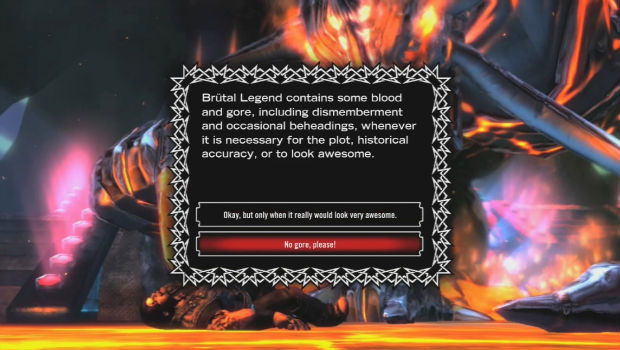 Alright, we get it already — Brütal Legend is coming out and we just have to play it. Sure, the intro to the game — six minutes’ worth, just sent to us by Electronic Arts today — makes us want it even more. But we’re not sure if that was possible, considering how pumped we got just reading the game’s ESRB listing.

The video introduces Kabbage Boy, the fictional pop-rock band that appears in the game. Brütal Legend‘s main man, Eddie Riggs, is the band’s roadie. While he laments that their style of music signifies the death of true metal, Double Fine’s Tim Schafer doesn’t agree.

“Kabbage Boy is an extremely popular band that if you don’t know about then you must be over 20,” he jokes. “I’m talking OLD. Because anybody who is anybody who is between the ages of 11-15 knows and loves Kabbage Boy.”

“We are very lucky to get them in Brütal Legend,” he adds, “and we just hope they don’t sue us like they are threating to do.”