Consider this feature therapy for me.

In a second, you are going to read a list of six completely irrational things I do in videogames. These are not irrational things that start off absurd and lead to some secret gameplay trick that suddenly makes me look like some videogame genius. No, these are irrational things in the truest sense of the word: utterly illogical acts that lack all reason and sound judgment. Basically, the acts of a crazy person.

And I don’t have any clue why I do them.

That’s where the therapy kicks in! By opening up about all of this, I am hoping you all can either help me understand why I do these things, or, even better, communicate some of your similar irrational videogame habits, turning this feature into some sort of giant Internet group therapy session. (ONE WITH PLENTY OF COMFORTING EMOTICONS!)

Grab some cookies and coffee from that card table over there in the corner, take a seat, and let the therapy begin!

I don’t think I am a crazy person. I mean, I am overly enthusiastic about everything, have an unhealthy obsession with all things dolphins and Showgirls, and love to occasionally punch old ladies in the face. But who doesn’t?! Am I right?

Okay, fine, I may be a little crazy. I just don’t like to think of myself as a crazy person. I guess that describes the situation better.

But I am not going to lie, I do some really odd things in certain videogames. Or, as this post has already declared, some very irrational things.

And now I am here to let you know what they are. Maybe saying all this stuff out loud will make them feel not nearly as irrational as I am making them out to be.

So, let’s get this therapy started.

My name is Chad Concelmo. And I do some pretty crazy things in videogames. 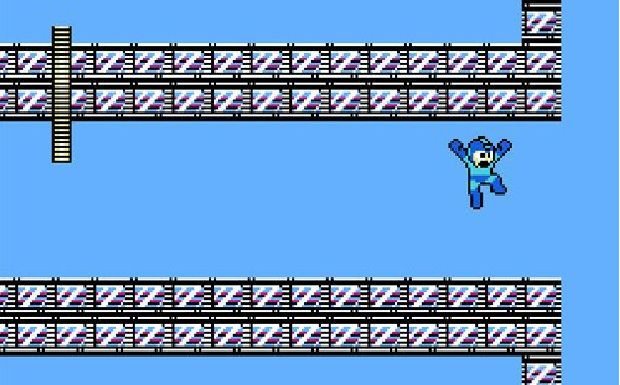 As most of you are familiar with, at the end of every stage in the Mega Man games there is a boss that lives behind a small door that opens up and pauses the screen when Mega Man touches it. (The classic sound effect alone that accompanies this door opening is one of the most iconic things in videogame history.)

And I know, everyone jumps through the boss doors in Mega Man. That is just what awesome people do! Seeing Mega Man pause during his adorable jumping animation is one of the great joys in life.

I am a crazy person.

My irrational reason for doing this: Entering a boss fight with such style makes the enemy’s ultimate defeat all the more satisfying! (I don’t have an explanation for why I have to do this, though. My guess? O.C.D.)

Effect this has on the game: None. 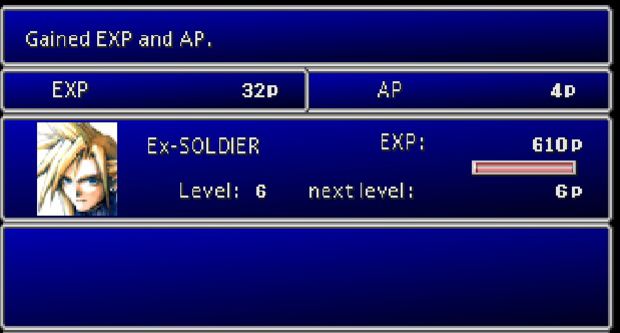 Waiting for the gil to count up in Final Fantasy VII

Okay, what do I mean by this? If you immediately know what I am talking about, congratulations, you are probably crazy, too! But, sadly, most of you probably skip this entirely and need a little more of an explanation. Oh, look at you with your sanity and stuff. Aren’t you the belle of the ball.

After defeating an enemy in Final Fantasy VII, the screen changes to the classic blue display telling you what rewards you have earned for your remarkable victory. On this screen, the collected gil counts up from zero, rolling up like a sped-up version of the continually growing jackpot on a slot machine.

At first, this is super-satisfying, as the sound effect alone makes you truly feel like you won something nice. Watching the numbers roll up is a lovely, gratifying touch.

But, after a while, this gets really old and can easily be skipped with the press of a button.

Not for me, though: Throughout all of my multiple playthroughs of Final Fantasy VII, I watch the gil count up all the way from zero each and every time. Yup, even later in the game when it takes forever.

My irrational reason for doing this: I can’t even think of one. I mean, the counting sound effect does make me jump up and down in my seat, giggling and clapping my hands like a hyper baby who just ate a piece of chocolate cake. So, there is that, I guess.

Effect this has on the game: None at all.

Not looting the bodies of innocent victims in Red Dead Redemption

At one point in Red Dead Redemption (such a great game!), I was very low on ammo and funds. I was riding my horse through the desert and witnessed a group of people being robbed by a pack of evil bandits. Quickly, I drew my revolver, aimed for the troublemakers, and … missed them completely, resulting in the subsequent massacre of the entire group of innocent citizens.

After the shootout was over, though, I did manage to survive (although barely) and kill the bad guys.

When I looted the bodies, though (something I desperately needed to do), I didn’t touch the innocent victims. Nope. I was so upset that they died that I refused to loot their bodies. I felt too guilty!

This attitude stayed with me the entire game. Not once in Red Dead Redemption did I loot a single innocent victim. Even though their money and ammunition would have really helped me!

My irrational reason for doing this: I wanted main character John Marston to be a good man. And, for me, this meant not stealing from the bodies of innocent victims. I genuinely felt guilty doing it!

Effect this has on the game: As far as I know, none. Although Red Dead Redemption utilizes a sophisticated morality system, I don’t think it is affected by what bodies you loot. Killing innocent people is bad, but grabbing their stuff after they are dead doesn’t affect your honor in the least. I could have easily done it and not been punished in-game at all. 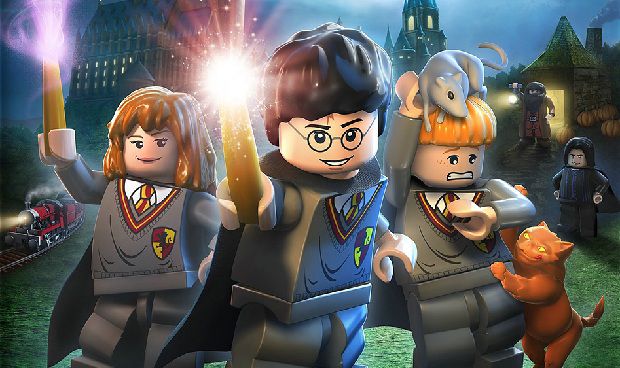 In the simple but surprisingly fun LEGO games, you can play as multiple characters, each with different abilities. The cast of characters in all the games is absolutely massive, the most recent LEGO Harry Potter being no exception.

While collecting the game’s many special items (red and gold bricks, character tokens, etc.) there is no rule about what character collects what things. If any character picks up any item, it goes into your inventory and its benefits are shared by everyone.

Even knowing this, I still, for some strange reason, only collect the game’s major items playing as Harry Potter.

This means that, if I beat a section with one character, instead of just grabbing the item and continuing the game like a normal person, I will scroll through each character until I become Harry, step forward, grab the item, and switch back to whatever character is needed.

Seriously, what the heck is wrong with me?!

My irrational reason for doing this: Harry Potter is the hero! He deserves to pick up all the spoils!

Effect this has on the game: Absolutely nothing. This is one of the more ridiculous things I have ever done in a videogame. Aside from feeling, I don’t know, cool for allowing Harry Potter to collect all the rewards, there is no rational reasoning for doing this whatsoever. 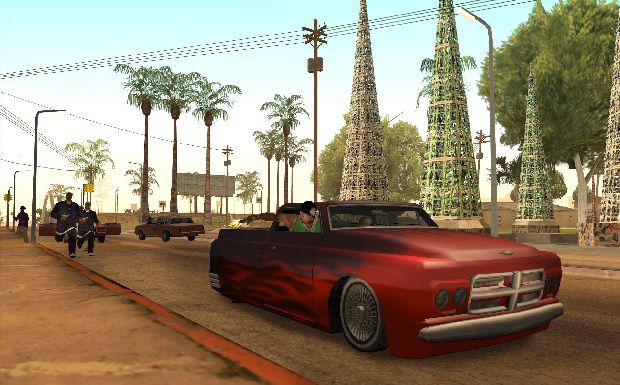 Stopping at all the stoplights in Grand Theft Auto: San Andreas

When I started playing Grand Theft Auto: San Andreas for the PlayStation 2, I was determined to make my main character be the most law-abiding gang member in all of Los Santos. I knew I would eventually have to break this do-gooder cycle once the game’s missions forced me to, but, until that time, I wanted CJ to be a relatively good guy.

That alone is crazy talk. It’s Grand Theft Auto, for crying out loud.

But, looking past the absurdity of this, I still wanted to try my little experiment. So, the first time I got into a vehicle, I made sure to follow all the traffic laws, including stopping at every single red light in the game.

Admittedly, I gave up on this one pretty quick because stopping at all the stoplights makes the game virtually unplayable. Getting to one of the early missions took me, like, 45 minutes. It was ridiculous.

My irrational reason for doing this: Like I said, I wanted my main character to be a good guy. I also wanted the game to feel as realistic as possible. Stopping at red lights is something I do in real life; why shouldn’t CJ do the same?

Effect this has on the game: Nothing. Your wanted level doesn’t even go up for small traffic misdemeanors in Grand Theft Auto. If anything, it makes playing the game excruciatingly long. 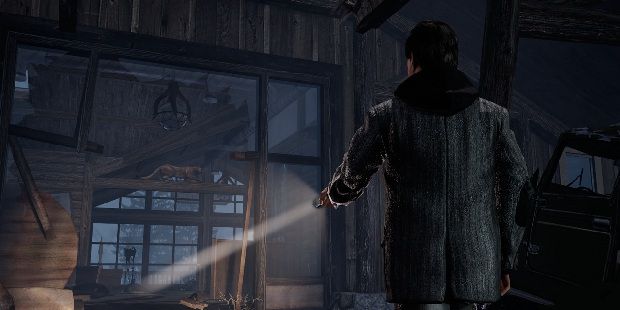 Turning off all the lights when leaving rooms in Alan Wake

Alan Wake is a spooky little title that focuses a lot of its gameplay on light and dark. The exposition parts take place during the day, and the meat of the action takes place in the dead of the night. While dark, Alan uses the power of light to not only ward off the scary enemies, but kill them as well. This makes light one of your most powerful weapons in the game.

Because of this, I made sure to turn on all the lights as I entered a new room. This would make me feel safe, as most of the enemies in the game can’t enter a well-lit area.

Once I felt safe to move on, I would leave the room and make sure I switched off the light switch.

Wait, why would I do this, you ask? Isn’t the light helpful? Oh yeah, leaving the lights on would totally have been the logical thing to do.

But this is me we are talking about.

Every time I left a room in Alan Wake I turned off the lights because … well … <sigh> … I wanted to save electricity.

I am not kidding.

My irrational reason for doing this: I am not so ridiculous as to think I was saving energy in the game’s virtual world, but something in my mind equated flipping off the light switches in Alan Wake with my actual real-world habits. I am so used to saving power by turning off lights when leaving a room in real life, I think this subconsciously crept into the actual gameplay. I just felt like a better, more environmentally-conscious person when I did it. Call me crazy. No, seriously, call me crazy. I have it coming.

So what do you think? Is there anyone out there that relates to any of these crazy things (please say yes, if only to make me feel better)? Would you consider these actions completely irrational … or is there a tinge of normalcy to them?

Is there a chance some of my in-game actions just reflect the person I am in real life, regardless of how they affect the actual gameplay? If that’s the case, that’s pretty fascinating.

Maybe I’m not as crazy and irrational as I thought …

Oh, who am I kidding? I stopped at all the stoplights in Grand Theft Auto. Lock me up and throw away the key.

Now it’s your turn. Share your irrational gaming stories in the comments below! I know you must have some similar tales!