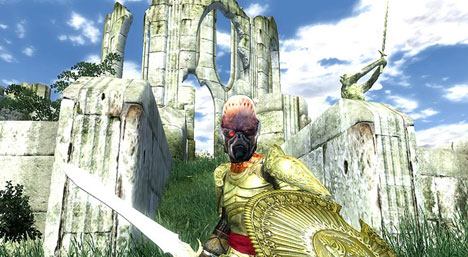 Today, Bethesda Softworks announced a long-term development partnership with Enemy Territory: Quake Wars developer, Splash Damage. The child of this partnership has yet to be announced, but Bethesda and Splash Damage are pleased as punch to be in bed with one another.

Splash Damage’s Paul Wedgwood says something about “passion” and how Bethesda makes “outstanding games.” Bethesda’s president Vlatko Andonov is “extremely impressed” with Splash Damage, and thinks we’ll be “thrilled with the offerings from this collaboration.” While I have no information on what these offerings will be, I can confirm that it will not be super models, fast cars, and mansions for gamers everywhere. Which is totally disappointing.

The press release (found after the jump) ends by saying that Splash Damage’s next project will be revealed in the coming months. See you guys at E3!

Splash Damage has been recognized by the industry for the quality of its titles and particularly for its skill in creating cutting-edge multiplayer games.  The studio has received numerous accolades and awards for Wolfenstein: Enemy Territory™, including Game of the Year nods from GameSpy, IGN, and PC Format.  Their latest game, Enemy Territory: QUAKE Wars™, won over 80 Editors’ Choice, E3, Most Wanted, and Game of the Year awards and nominations.

Bethesda Softworks continues to expand its development and publishing reach, with investments in a library of AAA titles and the opening of new offices in Europe and Japan in the past year. Best known for its 2006 Game of the Year, The Elder Scrolls IV: Oblivion®, Bethesda has in development a number of compelling titles, including the highly-anticipated Fallout® 3 due in Fall 2008.

“Bethesda Softworks has repeatedly been responsible for outstanding games as both publisher and developer.” said Paul Wedgwood, Owner and Creative Director of Splash Damage. “Both of our studios share a passion for creating great games, and we’re confident that this partnership will result in even greater experiences for gamers.  We’re really looking forward to working with Bethesda.”

“This could not be a more perfect fit,” said Vlatko Andonov, President of Bethesda Softworks.  “We are extremely impressed with Splash Damage and the quality titles they produce. They are highly creative and innovative, and have demonstrated a high level of dedication to their projects. We are confident that gamers everywhere will be thrilled with the offerings from this collaboration.”