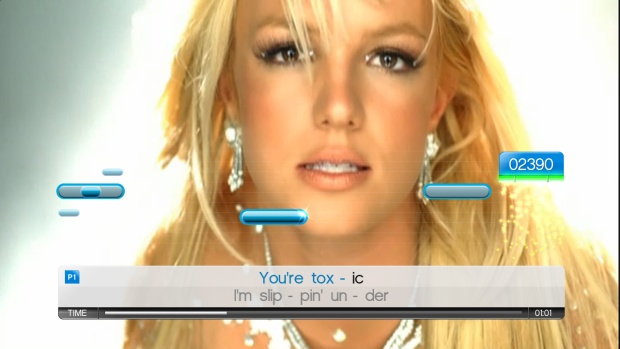 Deep in the same Best Buy store reduction bin alongside spray-on screen cleaner, old RAM, and countless copies of Every Extend Extra was SingStar PS3. A possible cheap gem in a pile of trash? The sales guy tells me that they’re clearing these out for 75% of the sticker price, or $10, and that other Best Buy stores should be doing the same. A PS3 game for $10 that isn’t Sonic? What a bargain!

This is the game only, and does not come with microphones. If you have SingStar‘s PS2 mics, then you’re golden. And the used game stores around here sell them for about $10 a pair if not.

So maybe you like singing or at home karaoke. If so, go out and get this.

But for me? I dunno. After popping the game disc in, waiting through a 15mb mandatory patch install, and then thumbing through the worst tracklist ever created for a singing game (see that after the jump), I was done. But I spent good, hard-earned money on this — money that could have bought two Extra Value Meals. So I forced myself to continue on.

I booted up Britney Spears’ “Toxic” and got down. Alone. In my living room. In the middle of the afternoon. My dog sat up and looked at me after I hit a high note, and then went back to sleep. Only he saw, but I was still embarassed.

After that, just for kicks (and scoring poorly on “Toxic”), I picked Faith No More’s “Epic” to sing. As I tried to rap along, a message kept flashing “awful” on the screen. Funny, I was thinking the same thing about this game. I watched on as grainy, scaled-up video played in the background as I tried to make the best out of a sad situation. And then I was done. That’s it. F*ck this game.

My point in all of this? Get Every Extend Extra instead. Or that 256MB of old laptop RAM. Or go out and treat yourself to McDonald’s Southern Style Chicken Sandwich Extra Value Meal. Just not SingStar PS3.