Which is the definitive Lost Planet, the Xbox 360 version or the PC port? That’s the million dollar question. If you are a hardcore graphics whore, PC gamer wanting to justify an expensive rig, or have a loving relationship with your mouse/keyboard combo, then you should definitely give the demo a go.

The single player demo is available in two flavors: DirectX 9 and DirectX 10, both of which can be downloaded right here. The minimum system requirements are:

Impressions after the break.

The demo itself seemed to be nearly identical to the demo Xbox 360 gamers played many moons ago. It features the same two levels as before, but also offers a performance test option that will help you tweak your video options.

If you are one of those guys that likes to start off by turning all of the graphical settings to maximum, even though you don’t own an über gaming PC, be prepared to see this friendly little message pop up once a few enemies appear on screen: 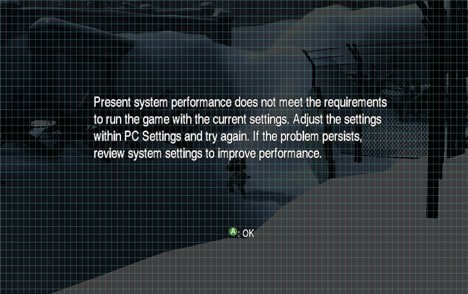 Having a decent rig myself (Sempron 3300+, 7800 GS, Gig of ram), I quickly discovered that in order to achieve an acceptable frame rate, I would have to turn most of the settings down to medium and even low. Looks like it’s back to the old Xbox 360 for me.

Using a mouse + keyboard rather than a gamepad felt very, very satisfying. The controls were fairly easy to learn, but if you would rather make use of your 360 controller, that will work fine too.

If you have a rockin’ PC, $40 to spare, and haven’t already bought Lost Planet for Xbox 360, I would highly recommend you pick it up when it becomes available on PC this June.