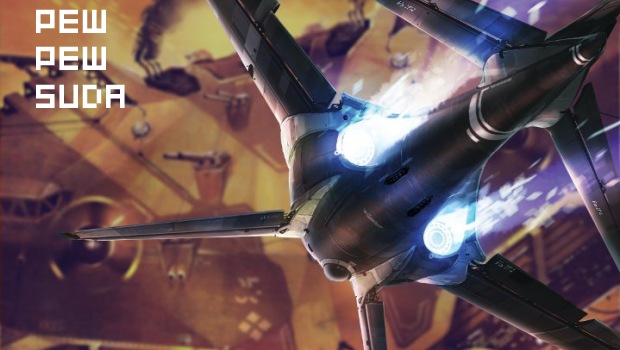 I realize that a poster hardly makes for new information on a game, but when said poster is for a new Suda51 game and also happens to be made out of a rare material called “awesome,” it warrants its own post. We get two versions, too! One with blurry super effects and one that lets us truly get a good look at the ship, the one I assume we will be piloting in the upcoming shmup.

We now know a few more details than we did when Sine Mora was originally announced thanks to the Grasshopper Podcast. In it they discuss such riveting subjects as what Sine Mora means (“without delay”), a loose release window (one year), and what Grasshopper Manufacture is doing on the project (sound and art direction). They then dig into a bit about the gameplay and its interesting time aspects… by saying that the gameplay has interesting time aspects.

I personally think that the 3D is the most interesting part here, as shmups seem to be one of the few genres that could really and truly benefit (and change) from the inclusion of the technology.