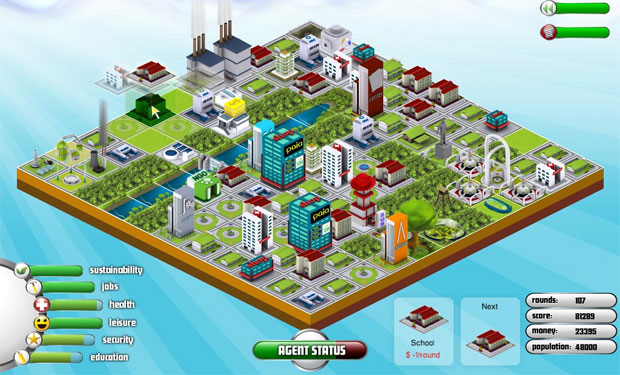 As Nick said way back in August of last year when he played City Rain, mashing the two distinct concepts together is “ridiculous enough that it actually works.” The 2009 Independent Games Festival Student Finalist is finally playable for the rest of us lowly peons; the demo and full $9.95 download can be found here.

Since the screenshot above doesn’t particularly explain the Sim City/Tetris comparison, here’s how City Rain works in a nutshell. Falling blocks (buildings) can be placed anywhere on the tile-based map. To upgrade existing buildings, you simply drop the same structure type on it. And, that’s mostly it.

Of course, you are building a city here, so there are meters you have to worry about. Whatever you do, don’t make the meters angry. It’s worth noting that City Rain is also being brought to Xbox LIVE Indie Games and “other casual game platforms.”