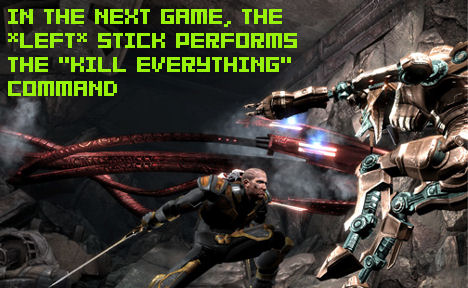 Denis “the words just fall out of my mouth” Dyack has shed a few pinpricks of light on Silicon Knights’ next project, claiming it will be “nothing like” Too Human or Eternal Darkness. Considering I’ve not been wowed by anything from SK since 1993, the promise of something unlike previous work has to be good news.

“We’ve been lucky enough to make Legacy of Kain, Eternal Darkness, Too Human and if you look at all of those they’re all really different,” stated Dyack. “The next game that we’re going to announce, not including the sequels to the trilogy, it’s nothing like anything else we’ve ever made before.

“We want to continue to do that to keep fresh. That’s really what’s important, and making sure that we continue to make new IPs but also continue to innovate in the genres that we try to… create content in, I suppose is the best way to describe it.”

Silicon Knights’ next project is in league with Sega, which marks the company’s first collaboration with a non-platform holder in ten years. Here’s hoping they play nice, given the company’s past dealings with other studios including Epic Games and Crystal Dynamics. More people involved is just more people for Denis to blame, after all.