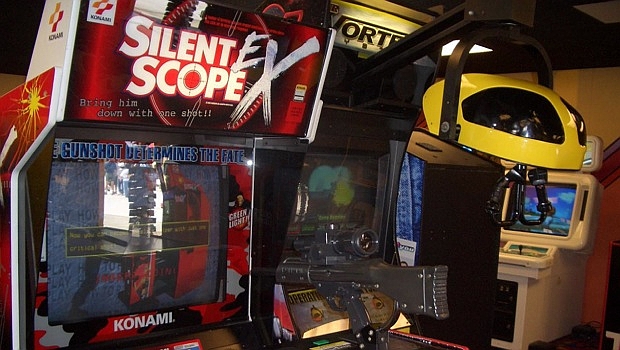 It’s official; the iPhone is a successful gaming platform. Today, Konami announced that Silent Scope is heading to the App Store “soon.” Excited? You should be. In typical Silent Scope fashion, you’ll be playing as a hardcore sniper tasked with a major responsibility — save the President and his family from vicious terrorists.

It’s a self-described rail-shooter, so get ready for some edgy “tap-to-shoot game controls” across the game’s three traditional modes: Story, Shooting Range and Time Attack. There’s also a Training Mode, but that doesn’t count — sissies shouldn’t play Silent Scope. Only real men should shoulder the immense burden of finger tapping terrorists to oblivion.

EL SEGUNDO, Calif. – April 8, 2009 – Konami Digital Entertainment, Inc. announced today that Silent Scope is coming soon to the iPhone and iPod touch. Based on the popular arcade game originally released in 1999, players take on the role of the world’s top sniper and must defeat terrorists to save the American First Family, including the President of the United States, who have been abducted by terrorists in Chicago.

“With the release of Silent Scope on the iPhone and iPod touch, we’re substantiating our commitment to developing quality content that takes our top franchise titles and turns them into an on-the-go gaming experience,” said Anthony Borquez, Vice President of Konami Mobile and Online. “Silent Scope allows players to conceal their firearms and perfect their sharpshooting skills wherever they go.”

Silent Scope is coming soon and will be available for download from the Apple App Store on iPhone and iPod touch. For more information, please visit www.konami.com/touch.