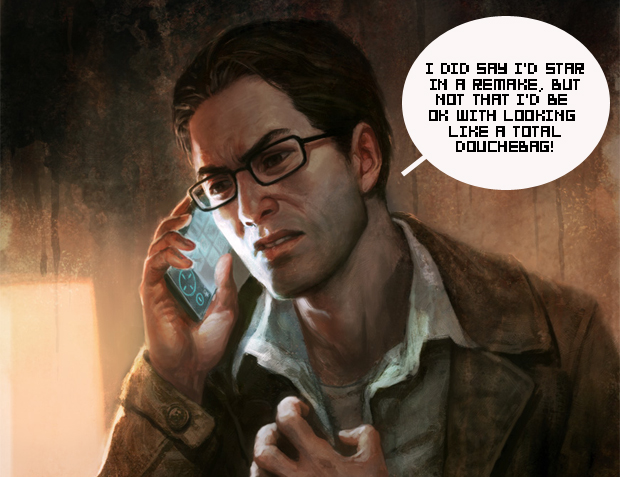 Like it or not, Silent Hill: Shattered Memories for the Wii is being made, and fans of the series are waiting to find out more about what the game will be like. As a quick refresher in case you don’t live and breathe all things Silent Hill like I do, the game is a “reimagining” of the first Silent Hill and stars Harry Mason. That’s supposed to be him in the art you see above, but what I see is more like a man caught somewhere between a heart attack and an epic case of the sh*ts.

Good news if you aren’t that into the Wii control scheme: the game is also coming out for Playstation 2 and the PSP. There’s more in-game detail available now as well, including the interesting sounding “psyche profile”:

Also new to Shattered Memories is a psyche profile element, which monitors every aspect of player’s reactions – from where they explore first, items that have been examined, and their reaction to those they meet. Small visual elements will also be altered slightly, adding to the oppressing atmosphere where nothing is what it seems. The psyche profile will adapt Harry’s actions as and when he meets normal-looking people or the game’s many inhuman denizens.

That does sound rather good, doesn’t it? I’d be excited if I didn’t think the art and logo were so disappointing, but I’m not abandoning all hope just yet. Akira Yamaoka is confirmed for the soundtrack, so at the very least we know the music will be what we expect from a Silent Hill title. How are you feeling about the game after seeing this new info?

Konami Digital Entertainment GmbH is to bring its terrifying Silent Hill series to Wii™ as Silent Hill: Shattered Memories heads to the Nintendo system for the first time in Autumn. The game, a clever reimagining of the now out of print first Silent Hill title, will also be released for PSP® (PlayStation®Portable) and PlayStation®2 at the same time.

While the game shares its twisting plot with the original PlayStation game, Silent Hill: Shattered Memories takes a different path in many, many ways. Characters can be approached but will offer different responses and be found in different places, while new clues and gameplay paths can be followed. The title follows Harry Mason, as he attempts to unravel the mystery of his missing daughter, Cheryl. A broken man, Mason’s investigations lead him to the mist-shrouded, snowy streets of Silent Hill: a malevolent town where the shadows play host to a wealth of evil, misshapen creatures.

Designed to make full use of the Wii’s unique controllers, Silent Hill: Shattered Memories uses the Wii Remote™ as a torch and cell phone as Mason looks for clues. The torch is vital for scouring the darkened, abandoned buildings of Silent Hill, while the phone acts as a secondary user interface, allowing the player to access maps via its GPS capabilities and take pictures of interesting elements. Likewise, the Wii Remote also can be used to pick up, examine and manipulate items to solve puzzles along the journey. Such technology was not available when the original Silent Hill was released in 1999, and its inclusion showcases Konami’s determination to enhance the playing experience with new, available technology.

Also new to Shattered Memories is a psyche profile element, which monitors every aspect of player’s reactions – from where they explore first, items that have been examined, and their reaction to those they meet. Small visual elements will also be altered slightly, adding to the oppressing atmosphere where nothing is what it seems. The psyche profile will adapt Harry’s actions as and when he meets normal-looking people or the game’s many inhuman denizens.

While the PSP® and PlayStation®2 will feature a more familiar control system, both games will boast the new additions, and are certain to entrance hardened fans of Silent Hill and newcomers alike. All three games are being developed by Climax, the team behind the acclaimed Silent Hill: Origins for PSP® and PlayStation®2, and will also feature an all-new soundtrack by series creator Akira Yamaoka.

Silent Hill: Shattered Memories will be released for Wii™, PSP® (PLAYSTATION®Portable) and PlayStation®2 in Autumn 2009. For more information, please contact Steve Merrett at Voltage PR on 020 7903 5122 or email [email protected]

”Silent Hill” is a registered trademark of Konami Digital Entertainment Co., Ltd.
All copyrights or trademarks are the property of their respective owners and are used under license.