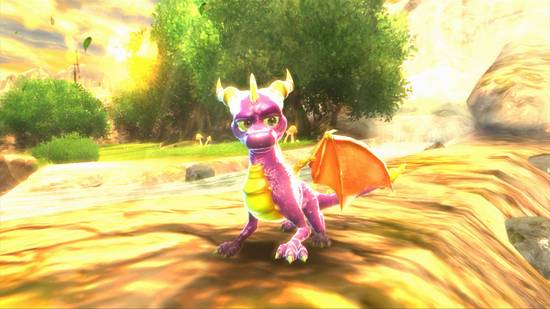 The Legend of Spyro: Dawn of the Dragon will mark the 10th anniversary for the Spyro the Dragon series. Hard to believe it has been ten years already. I still remember when the game first came out for the PlayStation 1. Everyone thought it was just another Mario wannabe, but as it turned out, it was a fantastic game.

Here we are now, after ten years and over a dozen games in the series. You’d think by now it would get really stale, but as it turns out, this may become one of the best Spyro in the series to date.

Hit the jump for my full impressions.

The very first thing I noticed as the game was being demoed was that Spyro looks older now. I was expecting Spyro to maintain his original look of a young dragoon, so I was pleasantly surprised that this was not the case. Spyro, like the series, has grown up.

The art style has also changed. As you fly around the game, you could easily think that this was a living oil painting. The game is very colorful, vibrant and fresh. The levels Spyro runs around in now are more of what one would expect to see in a story dealing with dragons. A lot of the areas we saw were very wide open and gave Spyro plenty of room to fly around.

Flying has been overhauled in the series, too. No longer do you have a time limit for how long you can stay airborne. You can fly around as long as you want and anywhere you want. The only limit that is imposed is that you can’t get too high into the air. 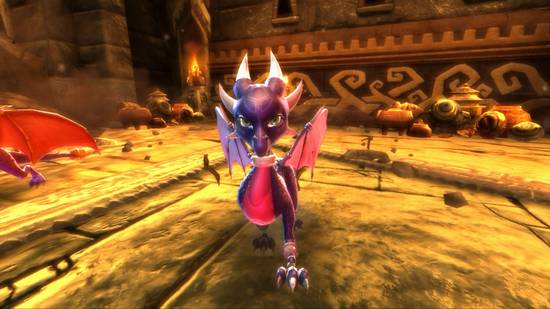 Also new to Spyro is a second playable character called Cynder. In previous installments of the Legend of Spyro saga, Spyro came up against Cynder, who was under the influences of Spyro’s enemies. Spyro was able to save her from the dark side and now Cynder is aiding Spyro in his quest to defeat the main enemy of this series, Dark Master.

As you fly around as Spyro, Cynder will fly alongside you and will help you fight any enemies you encounter. You can switch to Cynder on the fly, and control her as you desire. The main difference between both dragons is they have different magical attacks. The game will support co-op, so you and a friend can battle it out together. This option will only be available locally as there are no plans for online co-op, although when I questioned this, I was informed that it’s something they’re still considering before the final release. 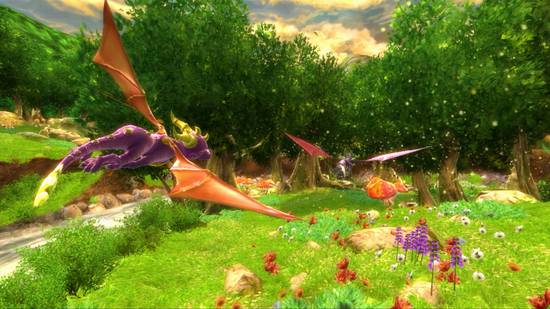 Spyro and Cynder will both have their standard melee attacks as well as grapple attacks. The fighting looks fierce, like Spyro and Cynder really just want to tear enemies apart. You can get combos for attacks, and after enemies have been taken out, you collect orb-like items that will go towards upgrading your attacks. The main difference between both Spyro and Cynder is with their magic attacks. Spyro is more focused on elemental magics and has ice, fire, thunder and earth spells, whereas Cynder has dark magic attacks such as poison and shadow because of her past life as a dark warrior.

In addition to upgrading your attacks, you’ll also be able to get upgradeable armor. Spyro and Cynder can be equipped with a helmet and other types of armor. This isn’t going to be just for looks, as these will help reduce how much damage they take from enemies while in battle. 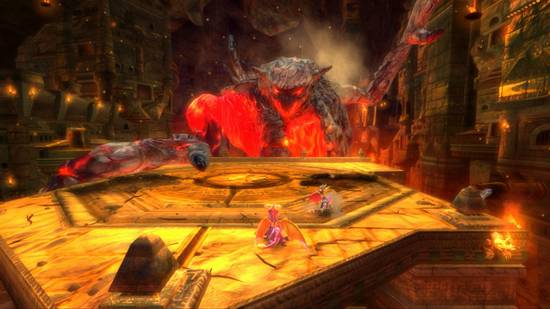 The last thing we got to see was one of the puzzles the game has. Spyro and Cynder need to get to the top of a cliff, but because of their flight height limit, they can’t just fly right to it. So instead, one of the dragons has to cling to the cliff’s side. Spyro and Cynder are magically chained together (it’s invisible) and have to stay close to each other. So for this puzzle, when one of the dragons has grabbed the cliff side, that dragon will swing the other dragon up to where they can get on top of the cliff. Then the dragon first dragon will swing on up with you. 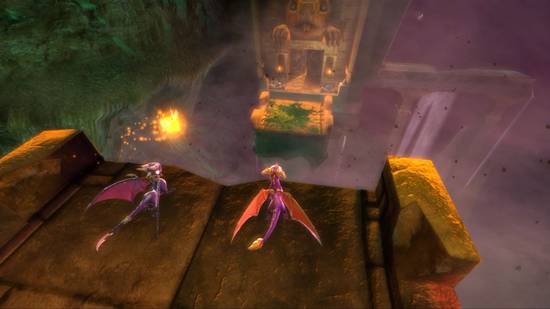 As far as the story goes with Dawn of the Dragon, three years have passed since the last game took place. Monsters have been destroying the world and Spyro is hope of the world, as it’s his destiny to take out the Dark Master. Cynder, Hunter the Cheetah, Spark and a whole cast of others will aid you in your quest.

The Legend of Spyro: Dawn of the Dragon is a coming-of-age story. Even with the God of War angle, it will be fun for a kid to pick up and still plenty of fun for older players.

The game will again feature some talented voice actors such as Mark Hamill, Christina Ricci, Wayne Brady and Elijah Wood. The game should be out this October for the PlayStation 3, Xbox 360, PS2, Wii and Nintendo DS.