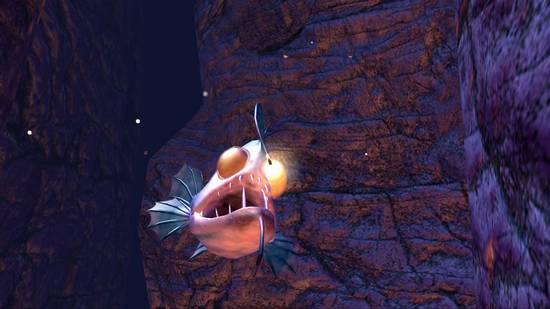 Remember Pokemon Snap for the Nintendo 64? Sea Life Safari is exactly that but underwater. You’ve been tasked to take photos for your Professor of over 60 undersea creatures. You dive underwater inside your vessel that takes you on your underwater journey. All you have to worry about is looking around and take pictures of life under the sea.

The game is targeted for the six and up crowd and there’s a step-by-step tutorial that can be turned on to help the youngins out. I’m sure many older players (cough *CHAD CONCELMO* cough) will be able to get into this as well.

The only controls you have to worry about are turning your character around and snapping photos. You will also be able to throw various items at the fish to gain their attention. The items will do various things and cause the fish to react in different ways, such as the blowfish blowing itself up like a balloon.

After the level is done or you think you’ve had enough, you go back up to the Professor, who will rate your photos on a three-star scale based on what’s going on in the photo and how good of a picture it is. You’ll earn more points for reaction shots, other fish being in the background and a few other bonus points. You can save your favorite photos in a little scrapbook as well.

There are only five levels, but the game is based off your Xbox 360 clock, so night and day will cycle through based on when you’re playing. Different fish will come out during different times so levels can be revisited to find more fish.

Overall, this is just a simple game that kids and parents can get into. I have confirmed that there will be sharks in the game. What? You want to know about dolphins? Not sure on dolphins; I didn’t bother wasting my time asking about that. Dolphins are lame anyway.