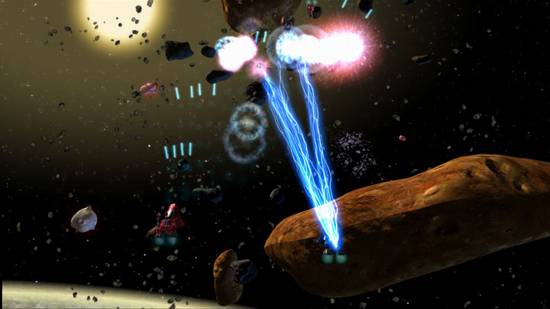 I love me some Pew! Pew! Pew! games. I’m maybe not as hardcore as a certain Bee Dog man, but I still like them. Assault Heroes 2 brings back the formula from the original title and adds a few new elements for the sequel.

You control a tank that has four different upgradeable weapons as you make your way through hordes and hordes of enemy bullets and lasers. The tanks can shoot bullets, fire and explosives, and you also have grenades and nukes as part of your arsenal of pain. You’ll also be able to perform team attacks with your co-op buddy. Just equip the same weapon as your buddy and press a button, and both your attacks will be chained together for stronger attack strength.

You can leave your tank at any point in the game and hijack an enemy vehicle such as a helicopter for a brief period of time. Hijacked vehicles will become useless after a certain point, but your tank will respawn near you once you need it again.

The levels are all pretty linear with some parts forcing you out of your tank to go at it on foot. There are a lot of destructible environments and buildings spread about in the levels.

Another change for Assault Heroes 2 is that there are levels that will take place in space. You will pilot a spaceship with some slight modifications such as a laser beam replacement for your flamethrower (makes sense, you know, with the whole no oxygen thing). You’ll also have the grenades replace your fourth weapon for your space ship.

Overall, I had a lot of fun with the game. Assault Heroes 2 will be out on LIVE May 14th.