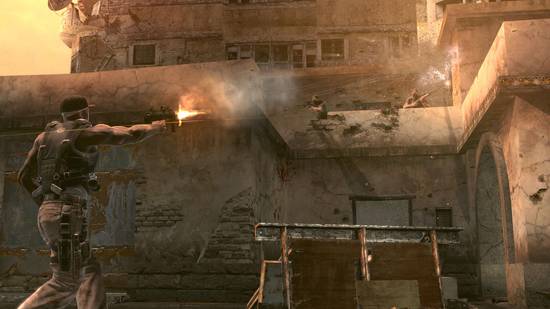 I’m sure most of you are still pretty baffled at the fact that a sequel to the original 50 Cent game is actually on the way. Hey, I still couldn’t believe until I finally got to see the game playing in front of my own eyes.

The thing about Blood on the Sand is that you need to get just see this game for what it really is: A fun, arcade style, action game. Take off the serious goggles for a second and you may see something you like here. Anyway, hit the jump to read up on what I thought of 50 Cent: Blood on the Sand. 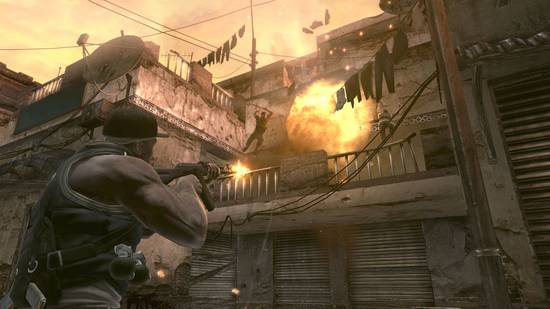 50 Cent and his G-Unit crew were booked for an epic concert in the Middle East. Lots of … tea drinking and … umm … foot flashing from the local women was sure to be had at the concert. After the concert, 50 Cent was ready to get paid, only to find out the concert promoter didn’t have the cash to pay him. 50 Cent was about to bust a cap, but then the promoter offered up a skull encrusted with jewels. 50 Cent gladly took this as payment instead and went off. Somebody else really wants the skull, though, and soon attacked 50 Cent and his G-Unit (Gee, you knit?!) crew. Now 50 Cent needs to do whatever he can to survive and get the hell out of the Middle East.

And that’s the story in a nutshell. 50 Cent II: Blood on the Sand isn’t trying to take itself too seriously here. The game plays out like an arcade shooter, even giving points out for everything you do as you progress through the story. In a way, it reminds me of Dynamite Cop, except, you know, good.

Points are awarded based on killing people and finding money throughout the level. You can get multipliers for chaining kills together. All this will be important if you’re into online leaderboards. This will also help you unlock new weapons and other stuff like taunts. I didn’t see a taunt used, but assume it’s something like 50 Cent flipping a guy off before bustin’ a cap in the fool’s ass. Taunts are used to increase your score. 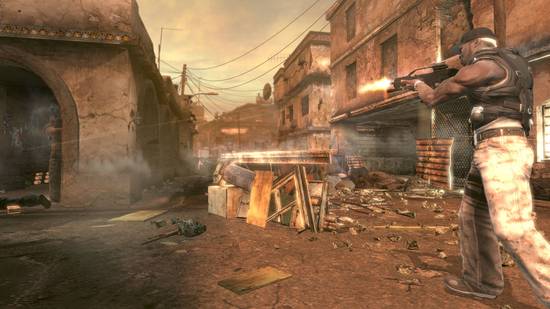 The game is a third-person action game and you can hide behind cover, which also allows you to perform blind firing. There will be over 20 types of weapons to choose from four different classes. The classes consist of heavy weapons, pistols, automatics and shotguns. Before starting a level, and during checkpoints within the level, you can pick one type of weapon from each class. You can’t pick up dropped weapons, so you’re stuck with what you got until you hit a checkpoint.

You also have a thing called counter-kills. If an enemy is close enough, you can perform some gruesome attacks by following the on-screen button prompts, God of War-style. On top of all that, you have something called Gangsta Fire, which slows down the action, Max Payne-style.

The health system is based off the regenerative health system, so if you take too many bullets, the screen will go red until you take some cover and wait for your health to go back up. You’ll have your G-Unit crew with you too, so they’ll help distract opponents while you heal yourself. Blood on the Sand is set to support drop-in-and-out co-op on both the Xbox 360 and PlayStation 3. There are parts in the game that will require help from one of your partners, too, such as opening locked doors. 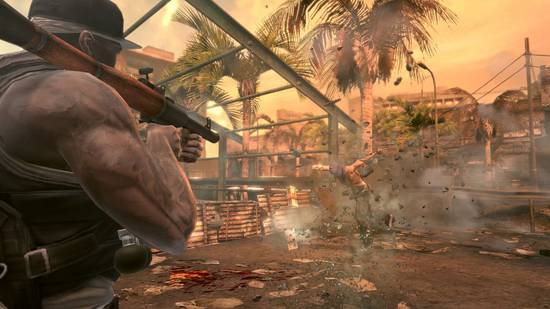 The last thing that was shown off was the enemy A.I. The enemies are aware of their environment, so they’ll take cover and do whatever they need to get to you such as climbing over fences.

Here’s a special note to all of you fans of 50 Cent and the G-Unit. They all perform their own voices in the game and there will be exclusive tracks by both of them in the game. There will also be two driving sequences and even a flying mission to help separate all the running and gunning action.

The game, like almost every other game nowadays, is using the Unreal 3 Engine. The build we saw was about 60% finished, and it was looking really good. Simply put, 50 Cent II is going to be an over-the-top arcade experience, and that’s exactly what the developers want here. The game should be out this fall for the Xbox 360 and PlayStation 3.