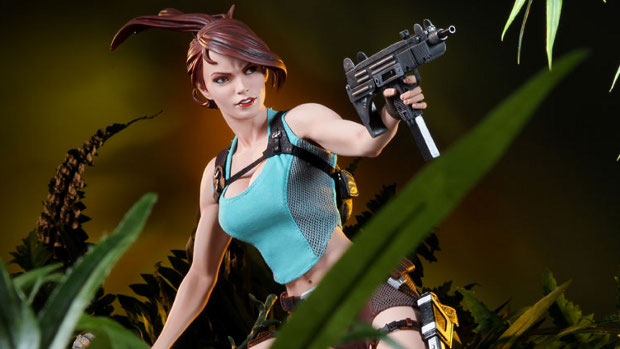 [As originally posted on Tomopop]

Well, by now, you’ve probably already heard and seen all about the new Tomb Raider game coming out, so perhaps we can interest you in a statue to match? Sideshow Collectibles has a new Lara Croft statue open for pre-order, based on the artwork of renowned illustrator Adam Hughes. Standing 19″ tall and weighing in at a mighty 13 pounds, it’s a different take on Lara than perhaps we’re used to, but the short shorts, the Uzi, the climbing on things … it’s all there.

Lara will be coming fourth quarter 2011 in two versions: a regular US$349.99 version and an exclusive version at the same price. The exclusive version comes with an exclusive art print. Both will require a deposit of US$35 within 48 hours of pre-ordering and have the FlexPay plan as an option. I’m probably not lining up to get her, but what about you guys?