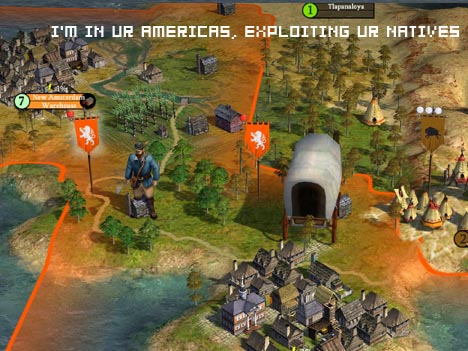 2K Games has just announced that Civilization IV: Colonization is currently in development at Firaxis as part of the Games for Windows brand. This new standalone game will serve as an update to Meier’s 1994 PC title, Colonization. Players will take the role of colonists from England, France, Spain, or the Netherlands, seeking freedom and independence in the New World.

Civilization IV: Colonization will feature an improved diplomacy system, historical figures that will guide your nation depending on gameplay choices, a new interface designed to be more accessible, online multiplayer and play by e-mail modes. The requisite map editor and other unnamed modding tools will also be making an appearance.

I’ve always enjoyed the Civilization series and had been getting a bit bummed at Civilization: Revolution’s console-only status, but having this to look forward to makes me a very happy camper.

Civilization IV: Colonization will be releasing sometime this fall. Is anyone else psyched to be getting a remake of another classic Meier game?

“We’ve received many requests from fans over the years to bring back
Colonization and now seemed to be the perfect time to do that,” said Sid
Meier, director of creative development at Firaxis Games. “The
Civilization IV engine provided a fantastic foundation for a new
Colonization experience and allowed us to create something great for
both new players and long time fans of the game.”

In Colonization, players lead one of four European nations on a quest to
conquer and rule the New World. Players will be challenged to guide
their people from the oppressive motherland, discover the New World, and
negotiate, trade and fight with both the natives and other nations as
they acquire power and fight for freedom and independence.

As a complete reimagining of the 1994 classic, Colonization is a total
conversion of Civilization IV that combines Civilization’s addictive
“just one more turn” gameplay with all-new graphics and features that
add more depth to the franchise. New features, such as a brand-new
interface, improved diplomacy options and the included modding tools
ensure that Colonization will be the next great title from gaming’s
premier strategy game developer.

* Colonization does not require the original Civilization IV product in
order to be played.