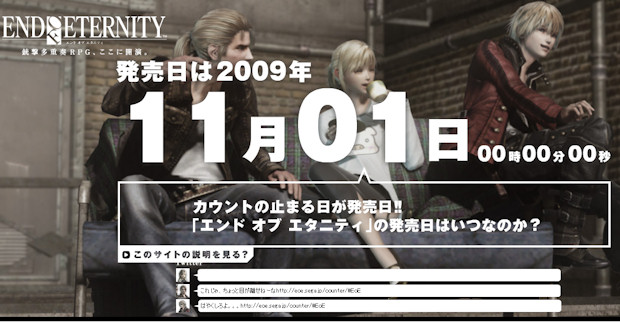 That’s right, folks! In a cynical and silly attempt to be different from all the other lame teaser countdowns that everybody hates, Sega has decided that tri-Ace’s new RPG, Resonance of Fate, will have a clock that counts UP. I … this is just … sigh.

The clock is counting upward toward Resonance of Fate’s release date. If you’re unaware of the game, it’s yet another of tri-Ace’s pompously named roleplayers, published by Sega instead of the usual Square Enix. The studio’s last big console outing was Infinite Undiscovery and, well, that one was pretty terrible. Hopefully Resonance will be much better.

We’ll have to wait until the clock’s finished counting upwards to see.

… For crying out loud.