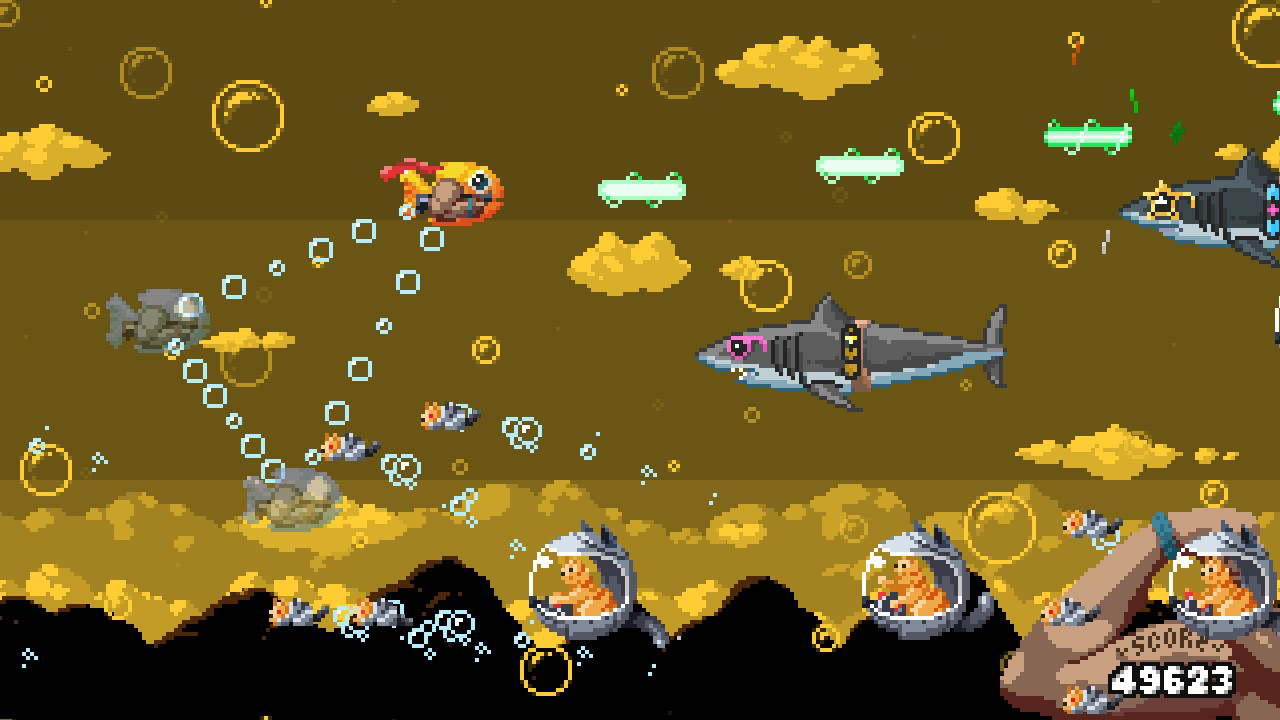 Just last week, we were graced with the release of Shutshimi: Seriously Swole on PC, PS4 and Vita. In this bizarre tribute to classic shooters, players take control of a team of gun-toting goldfish with memory issues as they fight off waves of laser-armed sharks and other giant creatures of the deep. While at PAX Prime 2015, the folks at Choice Provisions (formerly Gaijin Games) showed off their detectable wares, and the Neon Deity Games-developed Shutshimi was among them.

With the announcement of the upcoming Wii U release, we got the chance to get some deep hands-on time with the game. While Shutshimi is already out, we couldn’t pass up the chance to try the shmup title with the creators in co-op play. Like a mash-up of elements from Christopher Nolan’s Memento with Pixar’s Finding Nemo, and adding in the batshit craziness of the classic shooter Cho-Anki, this is totally one to keep an eye out for.

Shutshimi is a lover-letter to the side-scrolling shoot-’em-up scene and features many call-backs and references to the much-loved but punishing genre. With up to four players taking control of some seriously ‘roided-out goldfish packing major heat, you’ll be blasting through several stages and locales full of dangerous aquatic monsters that wish to put these guppies in their place. Unfortunately for these goldfish, their memories only last for approximately ten seconds and they’ll have to reorganize and reevaluate their arsenal and strategies after the time is up.

In similar vein to Half-Minute Hero, another time-focused recontextualization of an established genre, each level is broken up into smaller bit-sized gamplay sessions. At the end of each ten-second micro-level, players are presented with a choice of new power-ups that change the way they play or what foes they’ll encounter. For instance, one level gave me the ability to fire spread shots, while another power-up changed the background to floating animated butts. To make things even more breakneck, you’ll have to read super elaborate text descriptions for the power-ups with only a few seconds to make your pick. And in most cases, it’ll be mostly useless information and won’t actually explain what the hell will happen. With over 30+ items to choose from, you’ll be rolling the dice often. And I totally loved that.

In most shmup games, you can often times stick with one power-up and feel safe with it. Shutshimi however ditches that, forcing you to get out of your comfort zone. While a chocolate bar or a toy hammer may look inviting for players, you may end up regretting those picks — they could seriously confuse you with bizarre, sometimes batshit crazy results. Obviously, Shutshimi never takes itself seriously, and the ridiculousness of the game is up my alley. In case you were wondering, yes, the developers totally love the super insane Cho-Anki series.

Out now on PS4, Vita, PC, Shutshimi: Seriously Swole is a pretty awesome tribute to the shmup genre, and I had a blast being thrown through a loop every ten seconds. With the Wii U release on the way, players looking for a throwback to classic shooters with a sense of humor should wait for this one.