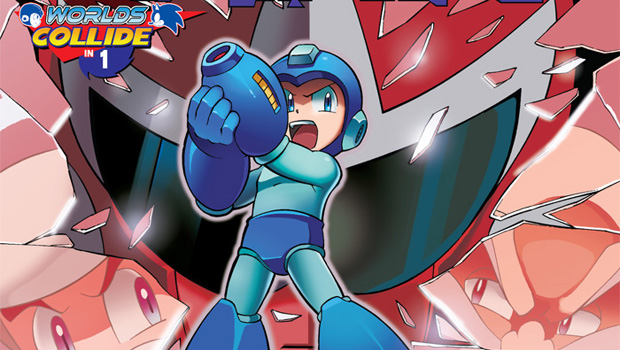 First things first, focus your peepers on the “Worlds Collide” counter in the top-left corner. It means that Archie’s massive 12-issue Sonic / Mega Man crossover event finally kicks off next month! My anticipation is palpable!

But before that happens, we have to get through March first. Thankfully, Mega Man #23 is done with silly side stories about automaton amore — Proto Man is back! A year after his activation, Mega Man celebrates his “birthday” with a grand city-wide celebration. Proto has had enough of his younger brother’s receiving all the love and attention that he so desperately craved and was denied, so he appears at the ceremony in full “Break Man” attire, ready to destroy everything Mega holds dear.

Exciting stuff, which should hold readers over until the action truly heats up in April. For now, you can purchase MM #23 in stores this Wednesday, March 13.