Oh what a knight

“Are you sure it isn’t Rocket Knight Adventures that’s responsible?” said Sean Velasco of Yacht Club games, his vocal pitch shifting to a higher, more humble tone. I couldn’t tell if he was joking or not, so I spelled out to him.

Since Shovel Knight, the game he co-created with the rest of the Yacht Club Founders, became a hit in 2014, we’ve seen a huge influx of indie games with the word “knight” in their names: Hollow Knight, Gryphon Knight, Portal Knights, Knights and Bikes, Knight Simulator, Fight Knight, Knight Club, Type Knight, Knight Club, Knight Terrors, and Knights are just some of the better-known examples.

Its a trend that stands in stark contrast to all the “War” games (God of, Gears of, World at, Total) and “Dead” games (Never, Rising, Red Redemption, Walking, Left 4, Island, or Alive) of the early 2010s. Gaming isn’t trying as hard to prove it’s “not for kids” anymore. Levity, altruism, and sincere goodness are fashionable again, and I think Shovel Knight helped make that happen.

If you agree, then you’ll be happy to hear that the next two (or is it three?) games that are set to include Shovel Knight work to keep that trend going in all the right ways.

The most recently announced Shovel Knight title is Shovel Knight: Pocket Dungeon and it’s unlike any other game in the series thus far. It has some things in common with Joustus, the card game in Shovel Knight: King of Cards, though it’s much more action-packed. You are killing enemies constantly in Pocket Dungeon. It’s an adorable bloodbath, which is quite the change of pace for the blue burrower, who only has to kill an enemy in order to proceed every few minutes at most in Shovel Knight: Shovel of Hope.

In fact, Pocket Dungeon started off as an entirely different game called Pocket Knights. Yacht Club was working on Joustus when they discovered it, so they had puzzle games on their mind. They contacted the developer and asked how they felt about transforming it into a Shovel Knight game. They wanted in, and now that it’s “about ten times bigger than it was before,” both parties are nothing but confident in how the collaboration is shaping up.

That said, it’s not always easy to communicate what makes the game fun with just videos and screenshots. It’s a common problem with puzzle games that are more about feel than they are looks. At first, it may be tough to tell what’s going on, as enemies seem to be falling from the sky, but are actually filling a room from the back. Your goal is to keep killing the monsters before they bury you, get the key once it drops, then unlock the door to get to the next stage. Along the way you may choose to unlock optional shops where you can spend gems on items to help keep you alive, which is always a concern, because every time you hurt a standard enemy, you get hurt as well.

It’s a combat system that will feel lovingly familiar to fans of the Fairune, Witch and Hero, or classic Ys games, but it might feel punishing to some folks at first. The fear of death is a great motivator though, and the goal the game is constantly pushing you toward is combos.

Let’s say there’s a skeleton you want to murder. If you take it on alone, it will probably take three of your hit points before it’s dead. That’s not the best use of your precious life. If you instead wait until that skeleton is touching one or more skeleton, killing a single one will end them all, saving you tons of life in the process. Still, no matter the size of your combo, you should probably run and grab a life-refilling potion after the fight is over, lest you end up killed in your next battle. 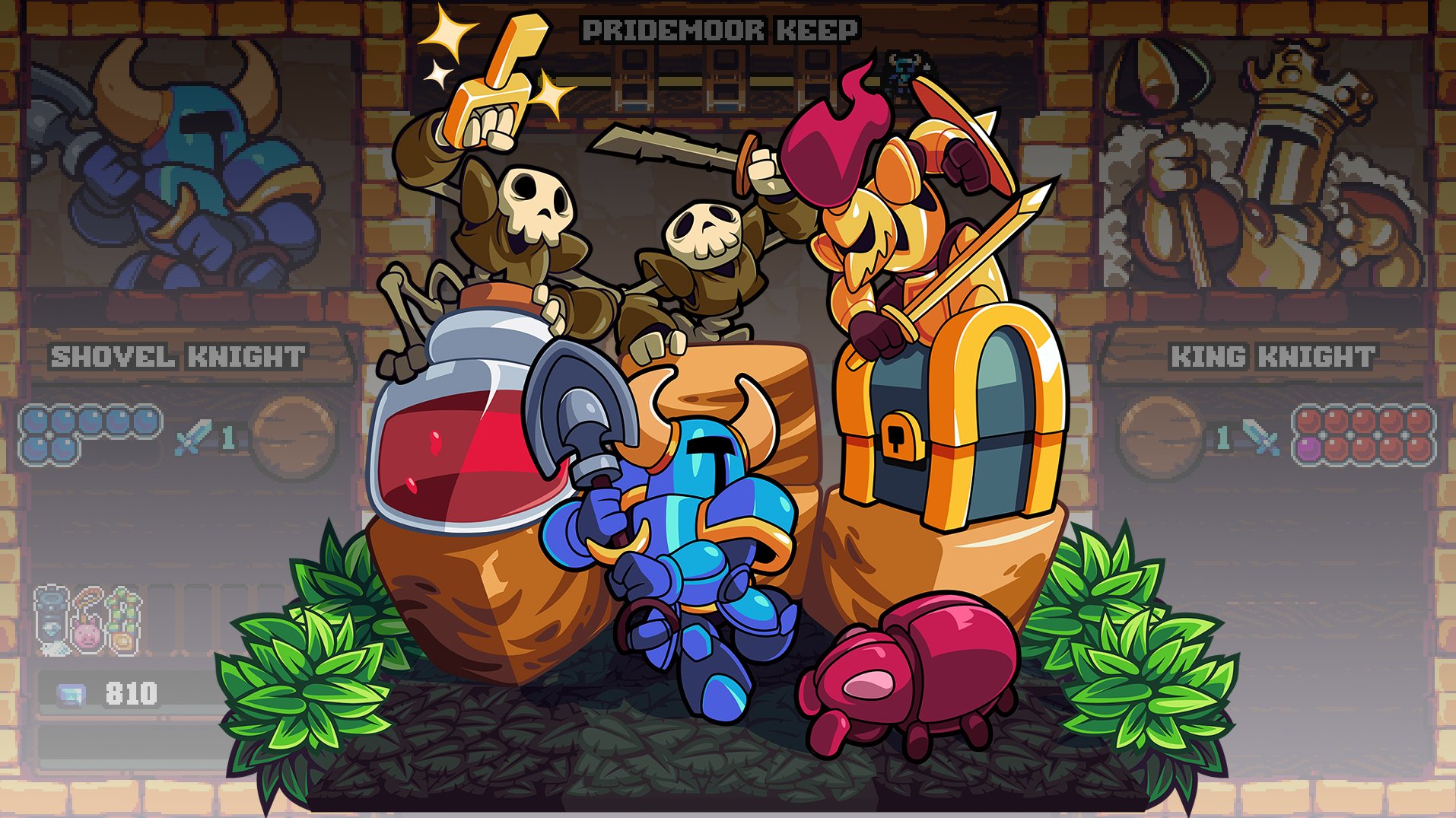 Killing enemies, darting away for potions, assessing the screen for combo opportunities, then killing more enemies sums up the game’s flow. That flow is interrupted in part by giant enemies like dragons and griffins (both of which will be familiar faces to those who have played prior Shovel Knight games) and, of course, boss fights with Shovel Knight rivals new and old.

A lot of those bosses will also end up being playable characters with their own ways of attacking and defending. For instance, Specter Knight takes damages from life-giving potions (because he’s dead) so he’ll need to get his hit points back by other methods. Flipping the script on how to fight and heal keeps these additional characters feeling fresh, especially in two-player Vs. mode, where considering the best match-up can make all the difference.

Next up on the docket is Shovel Knight Dig, which unlike Pocket Dungeon, was a Shovel Knight game from the outset. If feels like a “NES-to-SNES” jump from Shovel Knight, sharing a lot of the same mechanics as the original, but with much more detailed graphics, and with everything moving at a much quicker pace. The “Dig” name comes from the fact that you have to constantly keep digging down to survive.

Like it or not, this game is a speedrun, with the best prizes going to those who can make it to the bottom fast, and the worst of deaths (this time by a spinning drill) awaiting those who are too slow. It actually feels like a lot like Super Meat Boy Forever, another follow-up to a now-classic indie title that always keeps you on the move, dashing through stages made from procedurally-arranged chunks of hand-crafted level design.

Last on our list is Cyber Shadow, the indie that took up publishing duties for last year. The game is coming along great. At this point, it feels about as polished as it could be, and if all goes as planned, it should be out sooner rather than later. Compared to last year’s demo, I was impressed with how many different kinds of enemies the game pits you against at once. They all have wildly different attacks too, requiring you to change up your fighting strategy on the fly all the time.

We also know that the game is getting Shovel Knight amiibo support, and that Shovel, Plague, Specter, and King Knight fairies are confirmed. I hope you’ll get to fight them too, sort of like the amiibo functionality in Azure Striker Gunvolt 2. That would be quite the challenge, even for a robot ninja who has a Gradius-style shield system, a flaming sword, and the deadliest of throwing stars.

After they announced that they’re publishing games as well as developing them, Yacht Club has been flooded with pitches from various indie devs, through email and in-person. If you’ve seen the “Pitches, Man, Pitches” sketch on Chappelle’s Show (minus the $12 million, of course), then you have an idea of what life is like for them right now.

Sean told us that the attention has him feeling “…very flattered, but I think we’ll be at max capacity soon. We have a lot of stuff in the oven right now. Actually, very flattered is the word I’d used to describe everything about where we’re at in 2020. We’re flattered at this notion that we may have helped usher in this trend of knight games, and also of kinder, more lighthearted games in general.”

“We’re also flattered that so many developers have turned to us for advice and asked for our help with publishing. We’re just flattered all over the place, and we’re going to do our best to not take all of the kindness and praise we’ve received for granted. We’re busier than ever, and our goal is still the same, to make games that will capture your imagination and make you happy.”