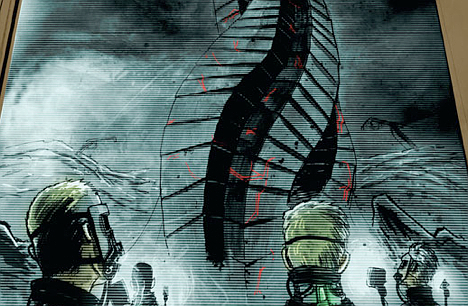 Dead Space’s narrative is certainly special, despite the conclusion’s somewhat disappointing nature. In an attempt to expand the Dead Space universe, EA and Image Comics partnered up for a prequel series of comic books that originally hit stores on March 3, 2008. Newsarama is currently hosting the first full issue of the series for those who missed out.

The comic sheds a bit of light on Unitarian theology, as well as the origins of the Marker in relation to the Ishimura’s arrival. It is a light read that definitely expands what could have been more fleshed out (or dismembered) in the game. It also stays true to the game’s tone and atmosphere – even down to the lack of urinals.

If reading a comic book is a problem, Hamza obtained the perfect solution way back in August when he visited EA Redwood Shores’ studio. Along with a lesson of all things Dead Space, the team also gifted him with video versions of the series. Books one through four can be found here and five through six here.