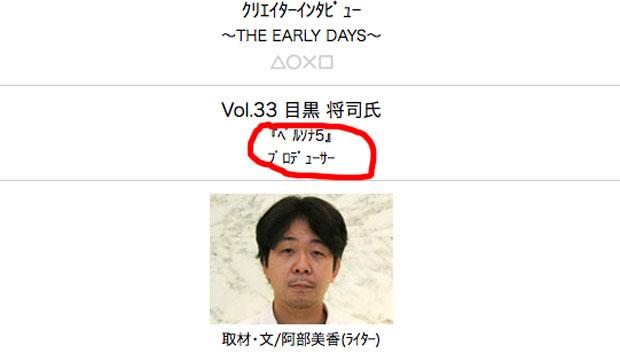 There’s some of you out there (I won’t mention any names) that swear up and down that Atlus Japan is not working on Persona 5. Impossible, I say. They have to be. I’d bet anything that they announce it at this year’s Tokyo Game Show, set to go down next month. My basis for saying that? It’s all from my heightened fan-sense — I can sense production on a game, even over oceans.

Slightly more reliable hints that Persona 5 is in the works have recently been tied to pachinko game reveals. And now, another lead, this time from a Sony mobile phone site. As you can see above, Shoji Meguro is listed as the Persona 5 producer. While that’s not full verification of an upcoming title, it tells me that someone is working on it.

What’s even more interesting is that Meguro, who we know as the Persona series composer, is listed as “producer.” Wouldn’t that be interesting to have the composer produce the game? If you played Silent Hill 4: The Room, you might know that Konami did a similar thing with series composer Akira Yamaoka. I’d be all for Atlus doing the same for Persona.