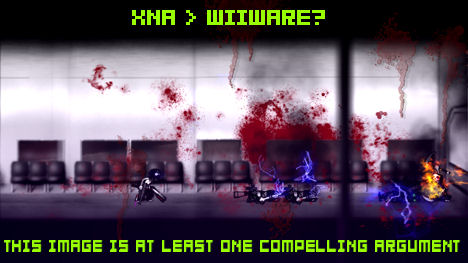 Microsoft’s game development group general manager Chris Satchell has stated that he finds Nintendo’s WiiWare service “confusing,” and has criticized it for not enabling the game developing community enough.

“I’ve been a little confused by WiiWare,” Satchell confessed to Spong. “The more I look at it, the more I’m confused, because it sort of doesn’t really look like something for independents. At best it’s what we would call a registered developer program.”

Satchell compared WiiWare to Microsoft’s XNA program, stating that while MS allows independent developers a platform to create and share their work, WiiWare says “Well, if you kind of work with us we can possibly kind of, back door or grandfather you into some kind of developer program which is a lot like our professional developer program.”

Is WiiWare as Satchell claims? Something that only half-heartedly pushes indie development and does little to empower it? Is XNA going to be the Holy Grail that indie devs seek instead?

Or are all claims of big companies wanting to help independent gaming the horsesh*t we all kind of know they are?