And you thought Welltris was tough

If there’s a pantheon of gaming, surely Tetris is the god of puzzle games. The satisfying feeling when you manage to clear a row needs no translation, and the Russian export has been played on every continent of the earth. The simple concept and ease of play make it a perfect game even for people who don’t consider themselves gamers, and that’s why Think On Labs decided translating the concept for Virtual Reality would be a great fit with Ship It.

Ship It is the first ever VR game to be featured in the PAX 10, and it’s easy to see why. It’s a great mashup of Tetris and Job Simulator, designed to be as mainstream as possible. The goal is to fill a shipping container with appropriately colored blocks, then latch it and throw it on a conveyor belt for distribution. The classic gameplay of Tetris works great with new technology, and I had a lot of fun packing boxes during my demo.

Different shaped and colored blocks float in a tube in front of you, and you’ll grab them out and place them in appropriate boxes, doing your best not to leave any gaps. Filling a container completely earns more cash than leaving space inside, but you don’t have to completely fill a container before tossing it on the belt. For some reason holding on to a block for too long will cause it to explode in your hand, so you have to pack your boxes quickly. If you accidentally grab a block you won’t be able to use, you can toss it in a shredder to your left, but there’s a score penalty. Playing is a bit of a balancing act, since waiting for the perfect block and filling a container completely might be less productive than starting a new container and partially filling it.

The game starts off very simply, filling small containers with simple blocks. Higher levels have multiple layers in their large containers, add up to two more colors to deal with, and have larger block chunks that need to be worked around. It can get out of hand pretty quickly, and I felt a little like Lucy in that old conveyor belt clip when I tried a more advanced level. Fortunately, wild cubes which can represent any color float by from time to time, and these can really help out if you’re in a pinch. 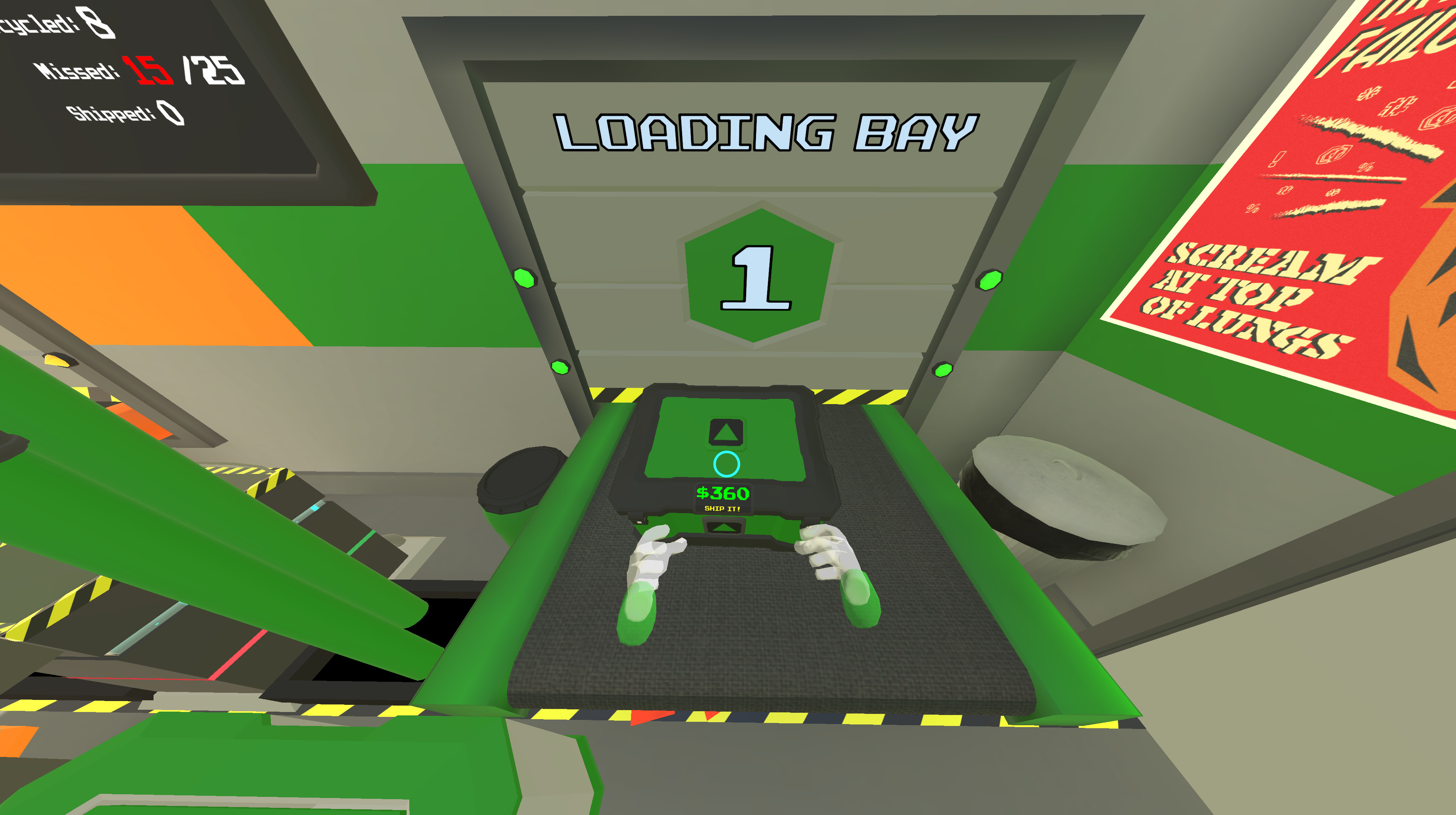 Ship It is a single player only game, though the developer I spoke with said adding competitive and cooperative multiplayer modes is something his team is working on. There’s currently a story mode, leaderboards, and a “special order” puzzle mode where you need to fill a box perfectly using only the blocks provided without wasting any pieces.

There’s a big focus on accessibility, and the game will automatically adjust the height if it detects a smaller person is playing. There’s also a color-blind mode for those who have difficulty seeing red and green. Ship It requires motion controls to play, but supports both the Vive and Oculus Touch controllers. I asked about a PSVR version, and the developer told me it hasn’t been ruled out, but that the team is focusing on the PC for now. It’s available as an early access title on Steam right now, and you can try a free demo if you have the hardware.