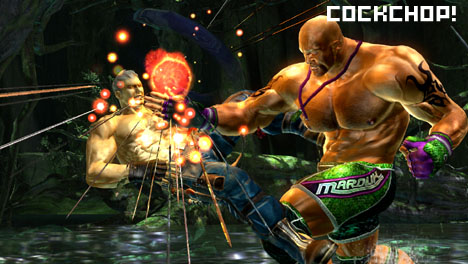 Why is it that the latest crop of 3D fighting games’ characters all have super shiny skin? Is it just that these fighters are all so well toned and fit that they sweat uniformly, enabling them to have a body constantly covered with a shiny gloss? Or is it so the lighting effects look cooler?

Even though fighting game fans have been tapping away at Tekken 6 in arcades, the home version is still about a year away from release. Although it probably won’t do the trick as far as holding you over goes, here are a few new screenshots from the console version (PS3 and Xbox 360) of Tekken 6, scheduled to drop in autumn of 2009.