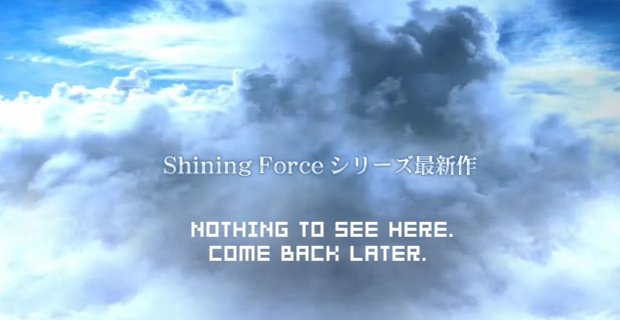 Have any of you youngins out there played the original Shining Force? It’s that RPG on all those Sega collections that you keep thinking you really should play, but Altered Beast keeps distracting you because you think it really can’t be as bad as you remember it. The entire Shining series is a bit of a roller coaster quality wise, but it seems that Sega is bringing it back again and hopefully it will play more to its roots than recent games in the series. A Japanese teaser site has popped up for the game and is currently showing a bunch of moon text and some numbers. Using ancient methods of translation we have determined that the numbers are indeed representations for the date April 17, 2009, when one can assume more information will be released about the game.

If this is truly a full fledged rebirth of the series than it is really exciting news. I know Jim would want it to be a DS or PSP game, but I can’t help but imagine an all out platform release returning Sega back to its glorious RPG days. Plus, they just released Shinging Force Feather for the DS in Japan in February. PS3, Wii or 360 would work for me as long as it reminded me why I’d spend hours with 2D sprites and no CGI when I was a kid.