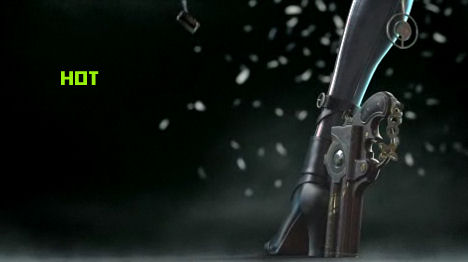 Even though one writes about videogames seven days a week, some hot looking titles will invariably still slip past my gorgeous eyes unnoticed. One such game to barely register on my radar has been Bayonetta, which is ridiculous, as these types of senseless action games are right up my alley.

Luckily, a blogger on Gametrailers has read and transcribed details from the latest EGM that discusses the inventive ideas in this crazy Sega game. Highlights include the fact that her guns are collectively named Scarborough Fair, after some 60’s folk rockers, the fact that main character Bayonetta has to become increasingly nude to perform attacks (because her clothes are made of magical hair) and the ability to summon a giant stiletto heel from the sky to crush your enemies.

There are equally crazy tidbits after the jump. It’s been a while since we had a totally balls-to-the-wall, demented action game, and it looks like Bayonetta is going to fill the gap quite nicely. I can’t wait to see the gameplay for myself.

1- The name of Bayonetta’s guns are Parsley, Sage, Rosemary and Thyme. Together, they’re known as Scarborough Fair, these are inspired by 60’s Folk Rockers.

2- Bayonetta wields 4 guns in total, 2 in her hands and 2 on her feet. She can also wield a Katana,which I’m guessing also has a 60’s rocker inspiration to it’s name, you can charge this blade for more powerful attacks. This will cause a heart to appear on screen that beats when you charge it up and dark fumes billow from the sword.

3- Enemies can drop weapons that she can use for a limited amount of time. One is a Tuba, which functions as a Bazooka.

4- When Bayonetta jumps or double jumps, gossamer butterflies temporarily sprout from here back. When she lands, dozens of butterflies appear at her feet.

5- Bayonetta’s outfit isn’t really leather but a special magical hair that cover her entire body and is used in her attacks. So in-game she gets more and more unclothed when she uses her attacks. The most powerful one renders her almost completely nude. Uh-Oh!

6- Bayonetta features angel halos that is used as currency to power-up your weapons, unlock skills, and but items

7- Bayonetta’s bullets can bounce off of walls damaging her enemies.

8- Bayonetta’s most powerful attacks summon a giant, smoky dragon, or a giant smoky sexy stiletto heel out of the sky to stomp on her enemies. But again, it’s not smoke that surrounds these summons, it’s hair. You have to enter specific button commands in order to summon the hair monster. Who knows what other types of summons there are.

9- When a summons exits the area, it’s punctuated with purple sparks

10- The area in the demo is known as Big Little City. You see glowing translucent pedestrians walking around, but these people are in a parallel reality. Bayonetta can see them but they can’t see her. What they CAN see is the damage they Bayonetta and the enemies are causing during battle, making the civilians flee.

11- Controls come in the form of a jump button, a kick button, and a shoot button, but you can purchase stronger combinations.

13- Sometimes on on-screen button will appear similar to quick time events in other games. Tapping the button fast enough unleashes moves called Torture attacks like a guillotine dropping from the sky on your enemy with obvious results, or an Iron Maiden erupting from the ground and clamping an enemy shut inside of it.

14- When Bayonetta start out in Big Little City, you see a cutscene where she walks into a field of flowers (sparkles rise from the ground signifying angel power) with pillars and fountains in the background. A number of angels appear in front of here meaning a battle is about to ensue.

15- She has a spinning jump attack that allows her to fire he guns in 360 degrees. She can also perform a handstand and aim her guns with her feet.

16- More weapons will be revealed closer to the games release. Each weapon has a monster spirit which makes it stronger and the context of the battle situation dictates which hair monster summons appear.

17- Angels are Bayonetta’s main adversaries throught the game. They got a peek at a formidable angelic foe at the end of the Little Big City zone. It’s not a boss but it’s wields a giant two-handed axe. Bayonetta can jump over the attacks even without Which Time. Humorously, this giant miniboss has pathetically tiny wings, gold piercings, and the famous angel halo.

18- A fine mist appears as you battle this miniboss and is designed to create a holy atmosphere. They said it looks pretty damn good. The battle ends with an onscreen prompt that summons a giant hair dragon who bites the miniboss angel in half!

19- The reward for killing this boss is a gold record, another music reference, It’s titled Angel Singing Voice. They are not sure what it’s used for or what it unlocks.

20- Bayonetta has a huge chain and sickle that she uses for both ground and air attacks.

21- The right trigger button the both the 360 and and presumably R1 on the PS3 controller shoots. You can equip all 4 guns at once or you can opt to swap out the pistols in her hands for a sword and use the guns on her feet as well. Certain weapons are designed to be equipped for the hands, feet, or both.

22- Bayonetta has been in development for a year and a half, shortly after Okami shipped

23- As Bayonetta attacks enemy angel forces, she breaks of pieces of their armor.

24- from what they saw from Bayonetta, it resembles Devil May Cry in many ways, but Kamiya acknowledges that the part that he showed them was the most boring part of the game and that the next stages will blow the doors open on the action. The final stage that they saw is truly epic and helps to support Kamiya’s claims.