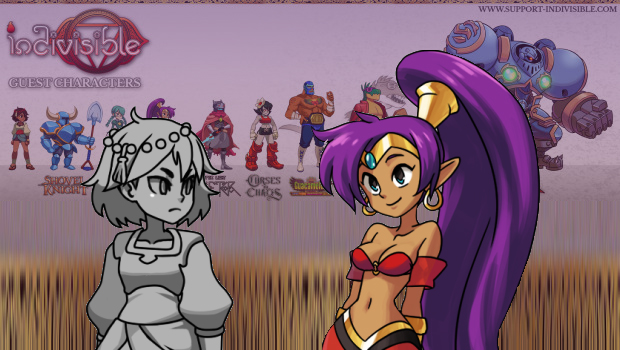 I had thought we’d seen all the cameo characters that Indivisible had to offer, but a few days ago, one the original “indies-on-consoles” icons of gaming was added to the already impressive roster of guest stars. Shantae has been around since 2002, which makes her the oldest character to appear in the game so far, though outside of that fact, she fits right in with the rest of the cast. Lab Zero animator Mariel Cartwright worked on both Indivisible and Shantae: Half-Genie Hero, so it makes sense that the hair-whipping heroine has found a home among these newly minted, upstart contenders.

Lab Zero has also put together a video showing off Invisible‘s impressive visuals and fast paced gameplay. Smart move. While they’ve had a demo out for both Steam and PS4 for a while, the reality is that most people more likely to commit to watching the first 30 seconds of a video than downloading and committing to play an actual video game.

I know a lot of you didn’t like the idea the last time I brought it up, but if the team ends up shy of their goal before the campaign is over, I hope a major publisher like like Sony swoops in and funds the rest of the project. Hopefully they’ll get there on there own, but if not, giving Sony 6 months of console exclusivity would be a lot better option than scrapping the game entirely.