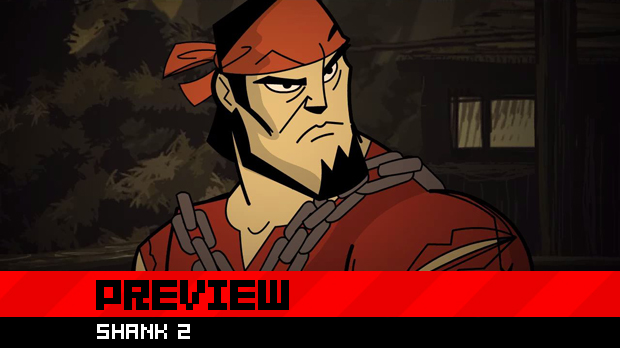 At E3 2010, the very best meeting I took the entire trip was with the folks at Klei Entertainment. They were a small dev team with a dream who had invested everything they had into a little game about a man on a quest for revenge.

That game was Shank and it went on to become rather successful for the folks at Klei. As such, it was an immense pleasure to see Jamie Cheng take the stage at the first annual EA Vegas Games Show to announce the sequel, Shank 2.

Almost as much pleasure as having it in my hot little hands for twenty minutes.

Despite defeating Cesar at the end of the first game, Shank’s troubles are far from over as mercenary forces have moved in on his turf and threaten his community. The only chance Shank has to save the people who depend upon him, obviously, is to stick something very sharp into whoever crosses his path. If there’s more story than that, I don’t care. Where do I stick the knives?

The original Shank was a very straightforward brawler made unique by its striking animated style, excessive violence and easy comparisons to the career of filmmaker Robert Rodriguez. Klei has taken the feedback they received from the first go around and seem committed to acting upon it with a vengeance all their own. As an example, the very first thing I noticed upon watching footage of the game was a button change for the “pick up” command, previously mapped in a rather inconvenient fashion to the same button used to jump. Also amongst the control improvements is full, 360 degree control over ranged weapons with both making a huge difference in playability.

Klei has also expanded the game’s stages considerably with little nooks and crannies to explore in between cutting people. Previously sparse platforming sections have also been improved with more timing-oriented jumps to help make traveling through the level more interesting while you wait for someone to cut. And, every once in a while, Shank comes across someone he only needs to cut free as he rescues residents of his town held captive by the mercenaries.

Did I mention Shank does a lot of cutting, specifically the cutting of people? He does, and he’s doing it in more creative ways than ever. The weapon configuration from Shank returns, with light and heavy melee attacks and a ranged weapon available in his loadout. Enemies will now drop weapons such as baseball bats and shovels, which can be picked up and replace one of your other weapons temporarily.

The pounce and grab maneuvers are back also, with the latter more effective than ever. When you see an exclamation point pop up over an enemy, it’s both a warning and an opportunity, as a quick grab at that moment will perform a counter and instantly kill your foe in the most violent manner possible. And the lovely combat animations, their range considerably expanded as well, make the payoff of that violence a real treat.

In addition to the single-player campaign, Shank 2 will feature a new cooperative survival mode. In the demo I played, my partner and I were tasked with defending a set of three ammunition supplies from enemies attempting to sabotage them. The stage was a simple, three platform affair with a couple of environmental traps that spouted flame when activated by a switch within the level.

The survival mode is a challenge, to say the least. Players can revive a fallen partner (with a brilliant animation involving a defibrillator), provided they can make it through the throng to reach them but that quickly gets to be rather difficult. Using cash collected from fallen enemies, power-ups can be purchased in the real-time shop menu to give a leg up. In addition to heath restoration items and grenades, there’s a wide variety of other available tools, including a powerful turret and an air-strike attack. Additional supplies are also dropped into the environment between waves.

To sum up, Shank cuts people with sharp things while you laugh either alone or with a friend. Shank 2 appears bigger and more brutal than its predecessor, refining and distilling what was already working and fixing much of where it fell a little short. And, best of all, we won’t have to wait too long as the title is currently slated for an early 2012 release.