[bacon&eggs is a delicious breakfast combination. It’s also the author of this great post about Shadows of the Damned and Suda51’s fascination with Mexican culture. Luchadores! Want to see your own writing on the front page? Write something awesome and put it in the C Blogs. — Kauza]

As Shadows of the Damned is still a very new game, I’ve made a point to avoid the major story spoiler, so please feel free to read on if you haven’t played the game yet. Fair warning though, I still reveal quite a few key moments, so if you’d rather not spoil anything at all, you can stop here.

If there was any doubt that Suda51 had an interest in Mexican culture, Shadows of the Damned clears that up right away. The first hint of Suda51’s interest was in Killer 7, the first Grasshopper Manufacture game I had the pleasure of playing. I was surprised at the grenade-launcher toting luchador MASK de Smith. The trend continued in the No More Heroes series as Travis Touchdown collected luchador masks, luchador trading cards, and watched luchador wrestling matches in order to learn new moves. But Grasshopper went all out with Shadows of the Damned.

Garcia Hotspur is not your typical video game protagonist. For one, he’s Mexican. And barring Manny Calavera from Grim Fandango (since he is in fact a skeleton), Garcia is the first true Mexican video game protagonist. It’s clear that English is his second language, but whether he’s an immigrant or a citizen is not really clarified. If that wasn’t enough of a risk for a game to take, Garcia is actually a culturally accurate portrayal of a Mexican man, and the game is full of other nods to Mexican culture. What makes Garcia accurate is his embodiment of the machismo attitude. Long a topic of interest to psychologists, anthropologists, and sociologists, machismo is a widespread and prevalent cultural attitude found in Latin American societies and originating in Spain and Portugal. Quite literally, machismo translates to a “superiority of masculinity over femininity” in Spanish and Portuguese. In this context, there is a lot more to Shadows of the Damned than initially meets the eye. Although plenty of people proclaim this to be Grasshopper’s most accessible game, in true Suda51 fashion, the entire game really is a metaphor. It’s just a much simpler and clearer metaphor than say, Killer 7. Seriously. I still have no idea what that game is about. 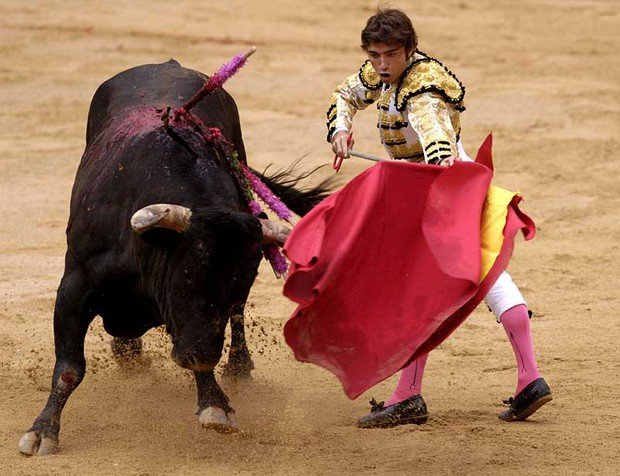 Machismo is the reason Spaniards throw themselves into a ring with a raging bull with nothing but a cape.

A lot of reviewers have pointed out that the game is riddled with dick jokes. And it is. Absolutely, way too many, some hilarious, some cringe-worthy, tiring, dick jokes. But that’s what machismo is all about. It’s about proving you’re a man’s man. And what better way to show that than by screaming “TASTE MY HOT BONER!” as you kill hordes of demons with your large, uh gun. Garcia goes out of his way to proclaim his bravado every time you fight a boss. “My name is Garcia Fucking Hotspur, and before you die, I will carve my name into your flesh.” His unflinching attitude in the face of a 10 story tall Goat Demon pissing darkness is proof of his manliness. He is capable of this because, as he tells his floating skull companion Johnson in one scene, “I am a Mexican, not a Mexi-can’t”.

In the beginning of the game, Fleming, Lord of the Demons, kidnaps Garcia’s girlfriend Paula. Fleming offers Garcia a one-time deal. He can have Paula back if he atones for his sins of killing Fleming’s demons. “Admit that have met a greater power than your own. Admit that your endowments are not as large as mine. And you can have her back.” But to do such a thing would mean admitting defeat. It would mean Fleming was more of a man than he was. Garcia flatly refuses by calling Fleming a “fucking asshole.”

Later in the game, Garcia meets Mr. X, a fellow Demon Hunter tracking down the bastard that killed and skinned his wife. They are both “hard” men, and showing a grudging respect towards each other promise to stay out of each others’ way. But later, when Garcia comes across Mr. X for the second time, he’s been decapitated by the very demon he had set out to kill. Now Garcia claims that Mr. X was pathetic and weak. Mr. X couldn’t avenge his wife. Garcia claims that, “I am a real Demon Hunter” and goes on to defeat the demon Mr. X could not. 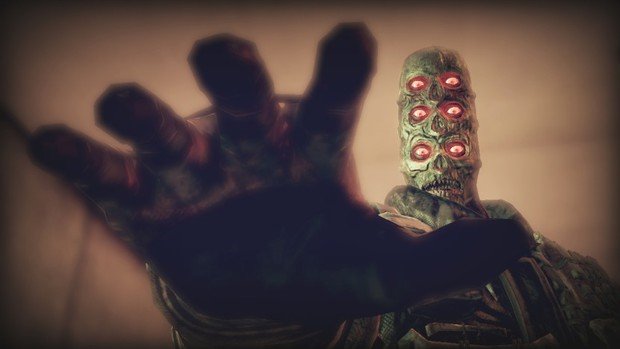 By Act 4, Garcia is chasing Justine, a demoness who is taunting Garcia by dragging Paula around just outside his reach. In a rather humourous scene (since Garcia has trouble pronouncing the word) Garcia explicitly tells Justine that he is misogynistic and continues to shout obscenities at her. Garcia doesn’t hide the fact that he thinks men are superior to women. He even claims that only men have the balls to be demon hunters. And yet Garcia’s machismo also results in the odd paradox that he finds himself in. Although he believes women are weak and less than men, the fact that his woman has been stolen means he has lost credibility as a man. What kind of man cannot protect his woman?

By the end of the game, Garcia must confront Paula, who is angry at him for letting Fleming have his way with her. She cannot forgive him. He has failed as a man. And so when Paula asks Garcia to die with her, he accepts, and his final act as a man is holding Paula in his arms as the darkness encloses around them. 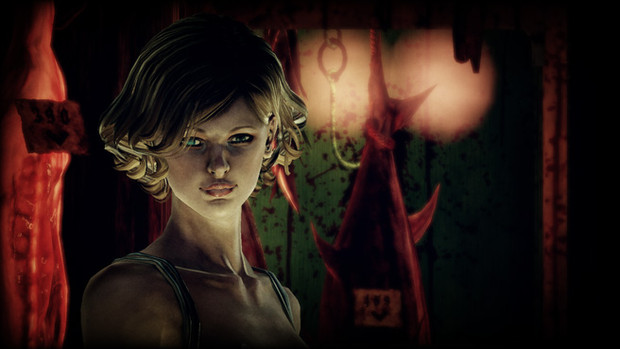 There are a few other cultural nods that I want to address, because they were rather endearing to me, but other opinions I have read found them to be rather annoying. The first of these are the storybooks you encounter detailing the back-story of the bosses. Yes, once you start reading them you are forced to listen to Garcia and Johnson read them, and it takes a good 3-5 minutes. Why anyone would be annoyed by this hilarious exchange of dialogue beats me, but these aren’t just backstories for bosses, they are the fairytales of the demons. They are the folklore of Garcia’s world. Mexico has a long tradition of oral story-telling of folklore and legend as do most cultures. These stories add authenticity to Garcia’s world and the demons that inhabit it, and I found myself thinking of the stories my grandmother used to tell me. The stories of el Cucuy (the Mexican boogeyman), la Llorana (the weeping woman doomed to walk the earth for eternity searching for her children), and el Chupacabra (the pesky goat eater).

The second cultural nod are the paper-craft levels in Act 4. Most positive reviews listed these stages as a welcome change of pace, while others thought they overstayed their welcome by the third paper stage. What they did for me though, is again, add an element of authenticity. Papel picado (perforated paper) is a common decorative feature during Mexican celebrations, most notably during Dia de los Muertos (The Day of the Dead). Although the stages aren’t quite as colorful as typical papel picado, the influence is undeniable. Combined with the charming cantina music that plays during these stages, the paper aesthetic continued to contribute to the authentic Mexican flavor of the game. 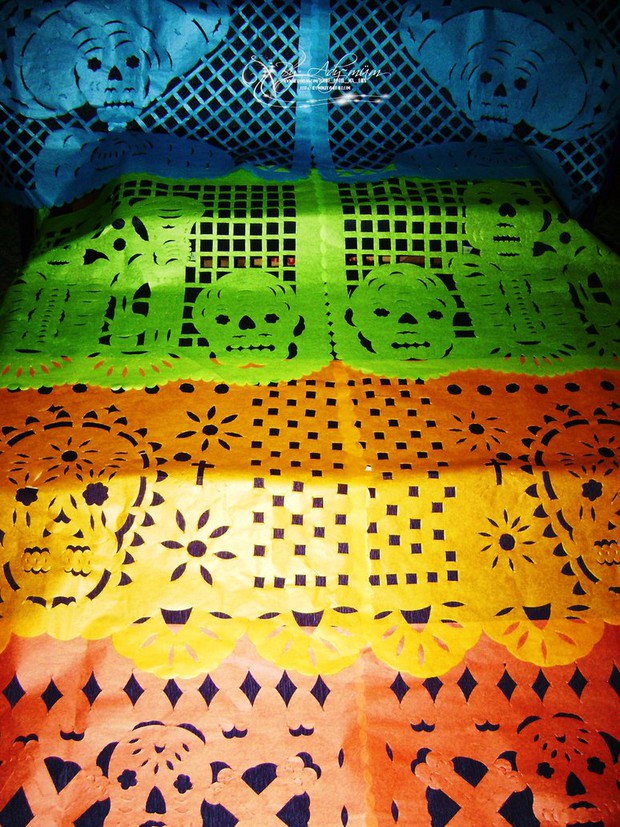 This stuff is seriously fun to cut out.

I could write a lot more on this topic, but I realize this is a game blog and not a scholarly essay. If Garcia embodies machismo for example, it could be argued that Paula embodies marianismo. There is also Johnson’s uncanny resemblance to sugar skulls (another Day of the Dead tradition), the goat lamps, and the general setting of hell. Of course, plenty of people believe no matter how creative a game is, if the gameplay is lacking than it doesn’t matter. Fair enough, I do not intend to change anyone’s mind if they believe Shadows of the Damned is a poor game. But hopefully I’ve highlighted a few points that help to explain WHY the game is designed the way it is. Suda51 does not set out to annoy gamers with excessive dick jokes, cheesy dialogue, odd design, or bad gameplay. There is a method to his madness. In my opinion, Suda51 and Grasshopper Manufacture do more to prove that games are art and culturally relevant than any “art game” ever could.