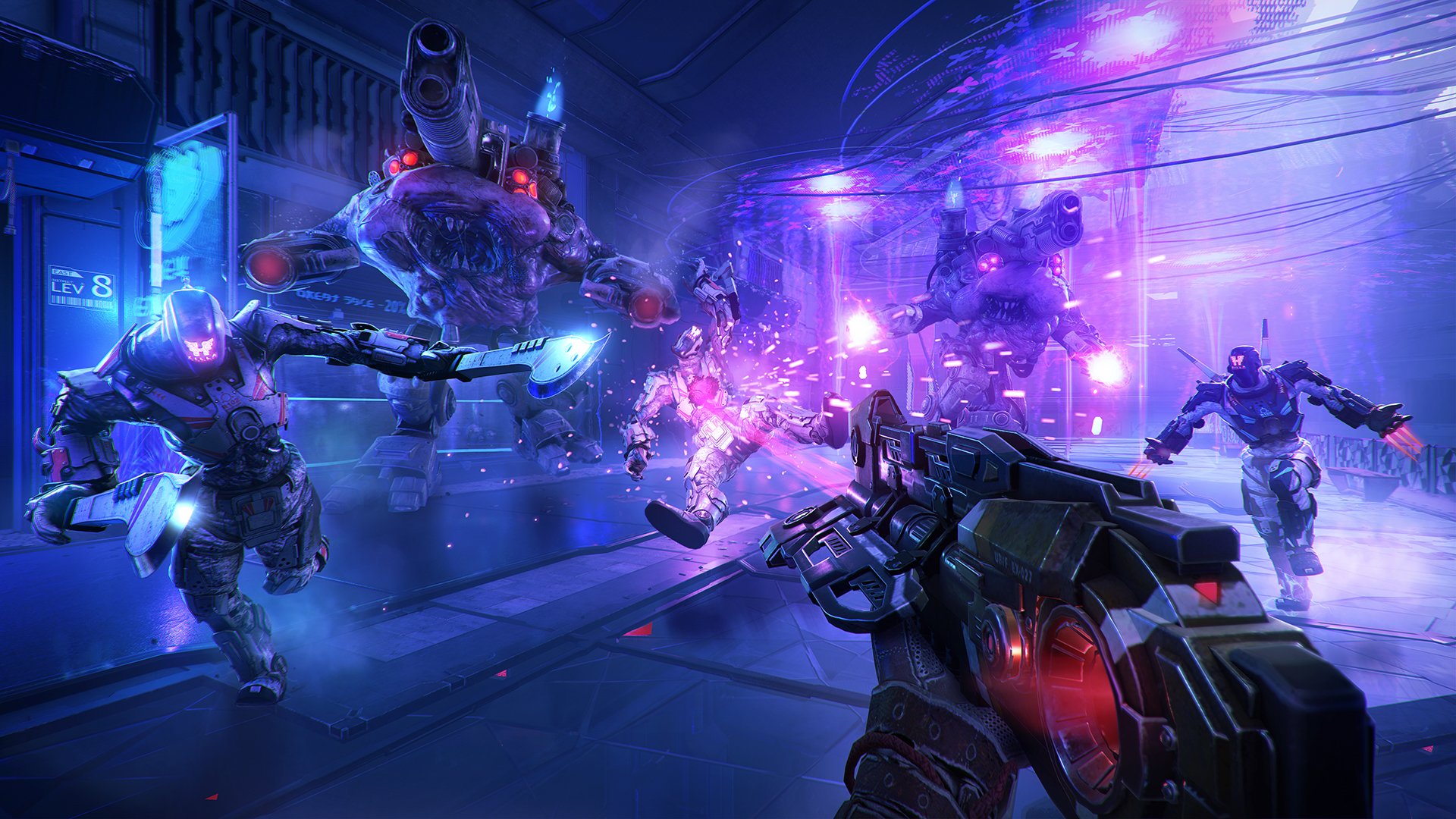 When I look at Shadow Warrior 2, I don’t see a video game. I see a piece of scenery you would put in the background of a television show or movie to easily communicate that a character is a “hardcore gamer.” It’s visually arresting in that it assaults the senses like an overzealous cop busting a street tough for possession. What’s happening on the screen at any one time is almost irrelevant. Hold down the trigger and then bad guys explode, genius.

Bombast on its own is not a problem. The real issue with Shadow Warrior 2 is how dull it feels in spite of the explosions. The world feels lifeless, even when populated by raging cyber-demonic forces. For all their visual splendor, the guns feel like cheap toys, lacking any palpable impact. Aside from the always-welcome damage numbers, I never had a solid indicator of how much pain I was dealing. After a scant few minutes inside the world of Shadow Warrior 2, I felt myself itching for the demo to end so I could do something more interesting with my time.

This is an especially challenging preview to write, because my brain is actively trying to flush my Shadow Warrior memories down the toilet in order to fit in more trivia about fast-casual restaurants. (Thanks, Doughboys!) For a game with such limp, toothless combat, you would think maybe it would tone down the attitude a bit, but Shadow Warrior 2 struts like it’s the next great retro shooter in the Serious Sam vein. It has more weapons than you can shake a stick at, with all kinds of killing abilities mapped to the d-pad, but none of it feels satisfying to use. Just run around in a circle & hold down the right trigger, and you’ll be fine. 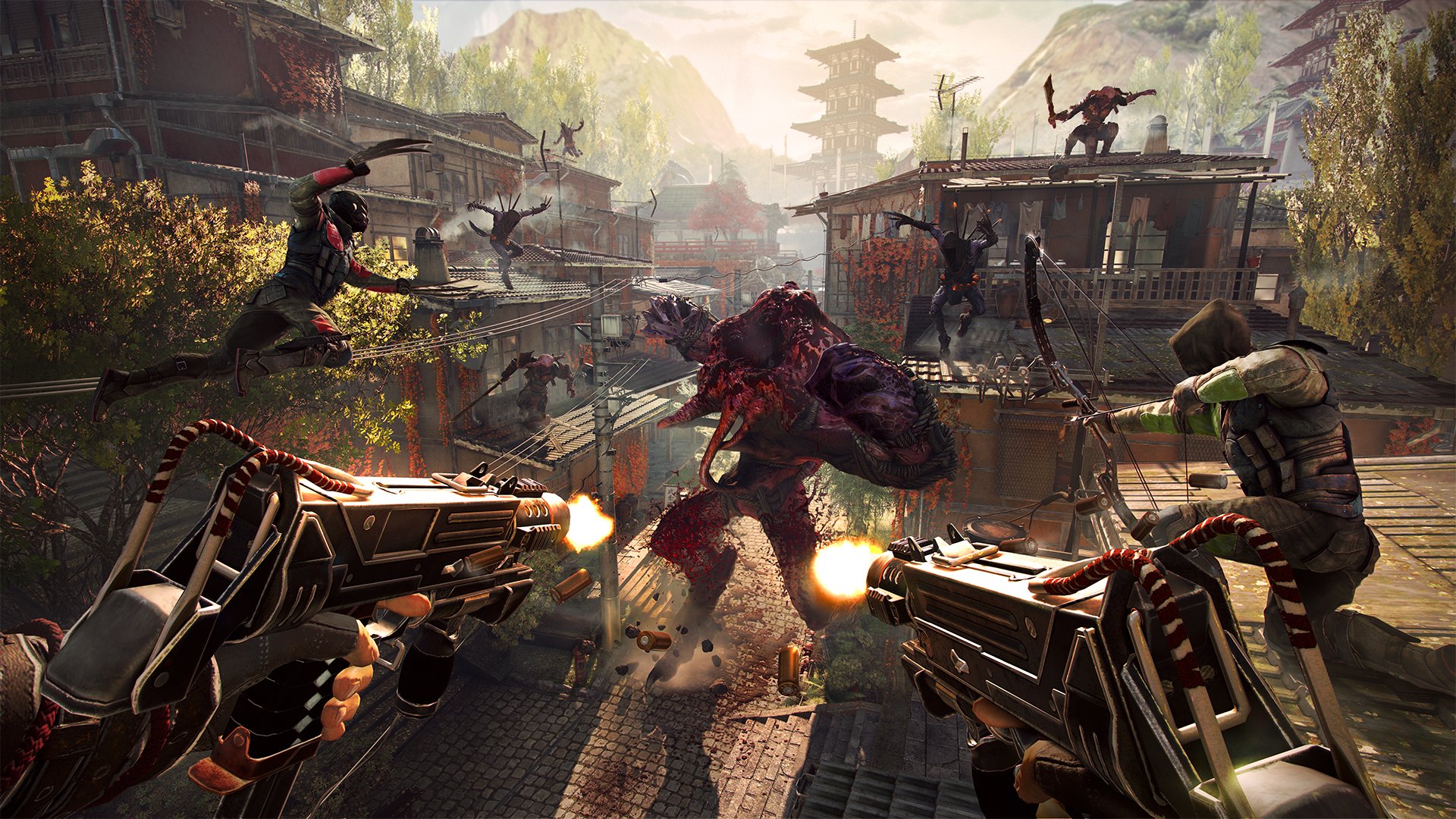 I have sympathy for the developers on a single point: first-person melee is notoriously hard to implement. I honestly didn’t expect much from the katana combat, which is good, because I did not get much from the katana combat. Dead Island remains the only game with solid first-person melee, and even the optimal control scheme for that game was hidden behind a menu option. I was told Shadow Warrior 2 would implement procedural cutting, with enemies slashed into pieces based on your actions, but is that really a do-or-die feature for a game where you’ll spend a lot of your time wildly mashing on the right trigger? I did notice that my slashes were reflected on enemies, but that’s only after it was pointed out to me.

The levels are procedurally-generated, which ties into the game’s newfound Diablo influence. I guess there’s loot, which implies you eventually get better guns, but I really don’t want to grind out levels in order to get weapons that don’t feel piddly. The sound wasn’t working during my demo, so maybe the weapons are all joke guns that make fart noises when they fire? That would be pretty fun. The problem with procedurally-generated levels is that no level will ever feel special. There’s no craft to random generation. You won’t chat with your buds around the e-watercooler about “that one level” because your levels will be almost identical but just different enough to deflate any potential conversation. “Yeah, I had a statue in the place where you saw a tree.” How exciting.

Who is this game even for? Why would you play an inferior throwback shooter when the new, critically beloved Doom is available for pennies everywhere you look? Why bother making a loot shooter with crappy guns when Borderlands has an iron grip on that genre? Come at the king, you best not miss. Shadow Warrior 2 won’t just miss — it will barely even bother to show up.