Everything we know from the reveal event

Square Enix’s 2013 Tomb Raider showed us a Lara Croft we had never seen before. For decades, the only Lara we knew was an iconic action star — confidently dual-wielding pistols while running, jumping, and gunning her way through any situation. The reboot aimed to show Lara’s formative moments. She was vulnerable and scared for once, just trying to survive.

Square Enix emphasizes and re-emphasizes this point many times over the course of our in-person Shadow of the Tomb Raider presentation. This is the conclusion of a trilogy, but, more importantly, this is the end to Lara’s arc of personal growth. She’s more experienced and more skilled. She’s going to have what lead developer Eidos Montreal calls “a defining moment.” And hopefully all that means something beyond “She murders better.”

We played a 45-minute Shadow of the Tomb Raider demo that took place near the beginning of the game. The most immediate takeaway is that this will feel very familiar for anyone who has spent time with the previous two installments. Duck-and-cover combat sequences, stealthy brutal insta-kills, exhilarating run-and-jump-and-hang-on-for-dear-life setpiece platforming — it’s all back.

However, it’s what’s new that made the biggest impression. The demo began with Lara and companion Jonah talking shop in Cozumel, Mexico. It’s El Día de los Muertos, a giant celebration to pay respects to the deceased. Lara carefully navigates the crowded city, as she’s completely surrounded by the vibrant festivities. It looks absolutely incredible.

Tomb Raider routinely does spectacular vistas, but it hasn’t experimented much with social spaces. This Cozumel one is a great start. Narrative director Jason Dozois explains that this is something Eidos is bringing over from its experience with Deus Ex. Shadow of the Tomb Raider will have city areas where the player can choose how Lara interacts with non-playable characters; we’ll have to wait to see what kind of meaningful impact this might have on the narrative. 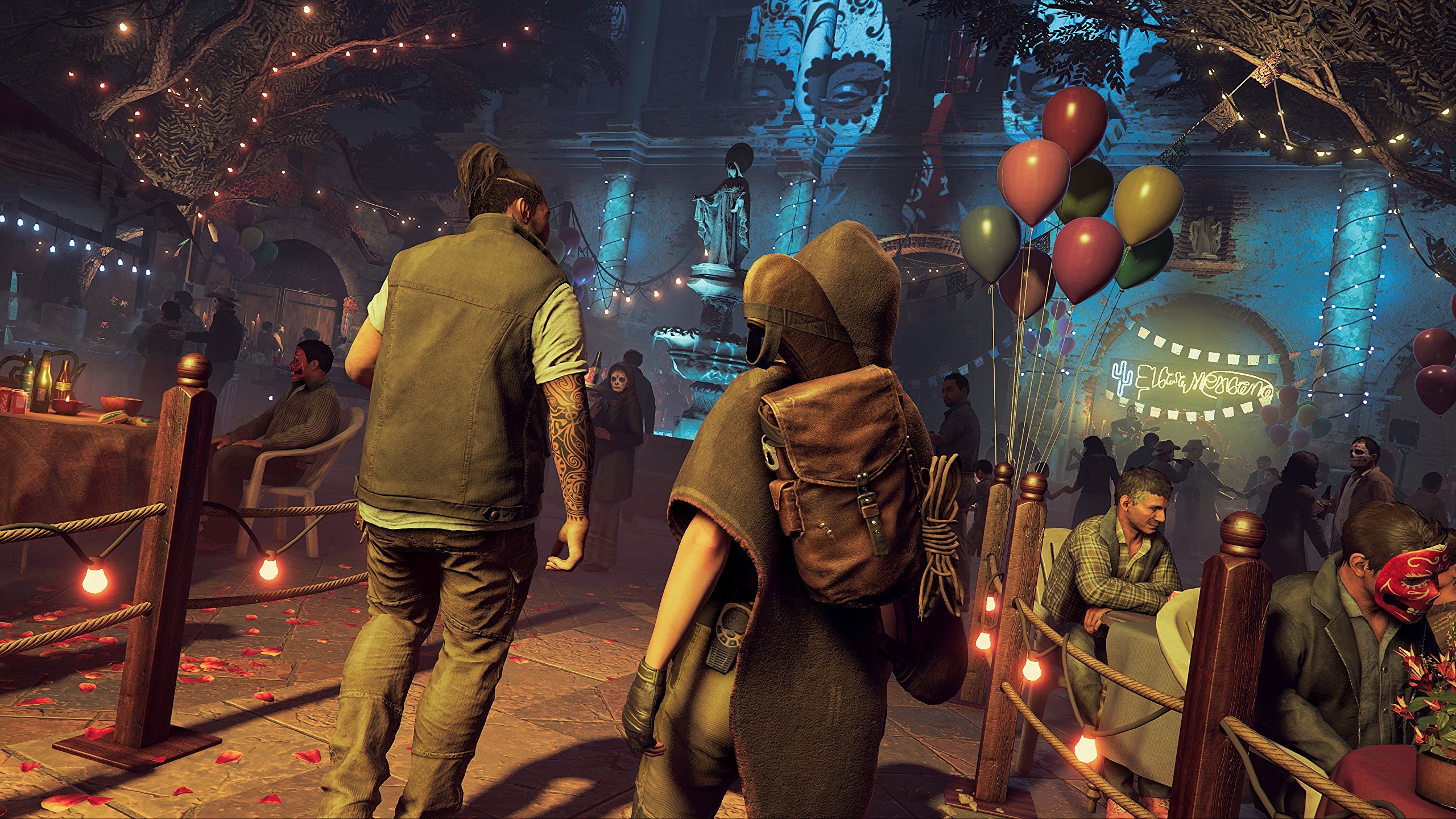 A large portion of the demo centered around retrieving an ancient Mayan dagger from a tomb. Lara’s main priority is beating the malevolent Trinity organization to recover these artifacts. She succeeds with the dagger, but Trinity ends up taking it by sheer force. Trinity’s nefarious plan is to essentially seek salvation by triggering the apocalypse through possession of the dagger and a yet-unfound Mayan silver box. The race between Lara and Trinity to locate an ancient hidden city that houses this silver box is seemingly the plot device that will propel most of Shadow of the Tomb Raider.

The stakes are certainly raised, and this feeds directly into Square Enix’s most intriguing claim: Shadow of the Tomb Raider is Lara’s most dangerous adventure — specifically with regard to the actual tomb raiding. Eidos seemingly takes a lot of pride in the design of the tombs. Dozois explains that once Lara figures out where the tombs are located, it’s dangerous to physically enter them. It’s not a cakewalk from there, though. The tombs’ puzzles will kill Lara if she tries to solve them incorrectly.

The non-tomb parts sound rightfully treacherous too. The Peruvian jungle seems like a stunning backdrop for this sort of action. There’s sure to be plenty of perilous climbing and leaping through the dense and vibrant wilderness. Lara can swim in Shadow of the Tomb Raider, which is almost definitely a clear indicator of several tense near-drowning scenes. Also, Dozois mentioned something about Lara fending off parasites, which seem like the least of her worries. Oh yeah, and there’s the whole thing about Trinity actively trying to murder her. 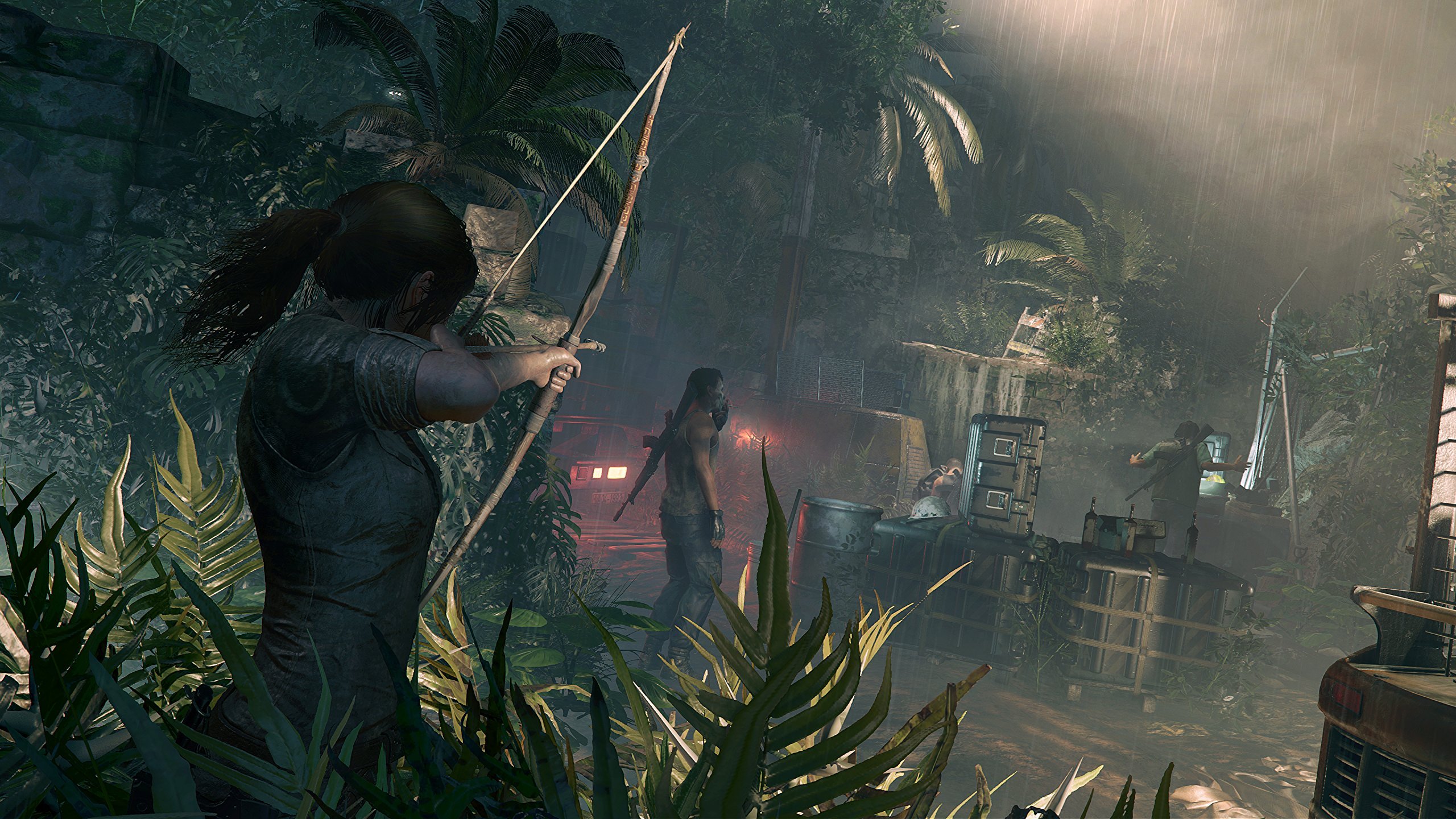 What we were shown was predictably light on gameplay changes. That’s likely because the demo was early in the game and Shadow of the Tomb Raider is set less than a year after Rise of the Tomb Raider. Any new skills will probably be acquired later on. However, we saw Lara’s penchant for hiding in vine-covered overgrowth. It’s a fine place to launch a sneak attack by putting a climbing axe through an unsuspecting guard’s jugular. We were told that Lara will eventually blend into her jungle surroundings by covering herself in mud. Square Enix talked of her evolution into “the apex predator,” which she’ll partially do by channeling Schwarzenegger in Predator.

It’s also worth noting that Shadow of the Tomb Raider looks as if it’ll follow in Rise of the Tomb Raider‘s footsteps with regard to structure. The original game was rather straightforward, whereas Rise featured a few large open areas. The slice we saw was completely linear, but lead game designer Heath Smith assured us that’s only because it’s the beginning. Once into Shadow, things will open up. Smith says “It’s very much the Metroidvania game you know and love from the previous [Tomb Raiders].” 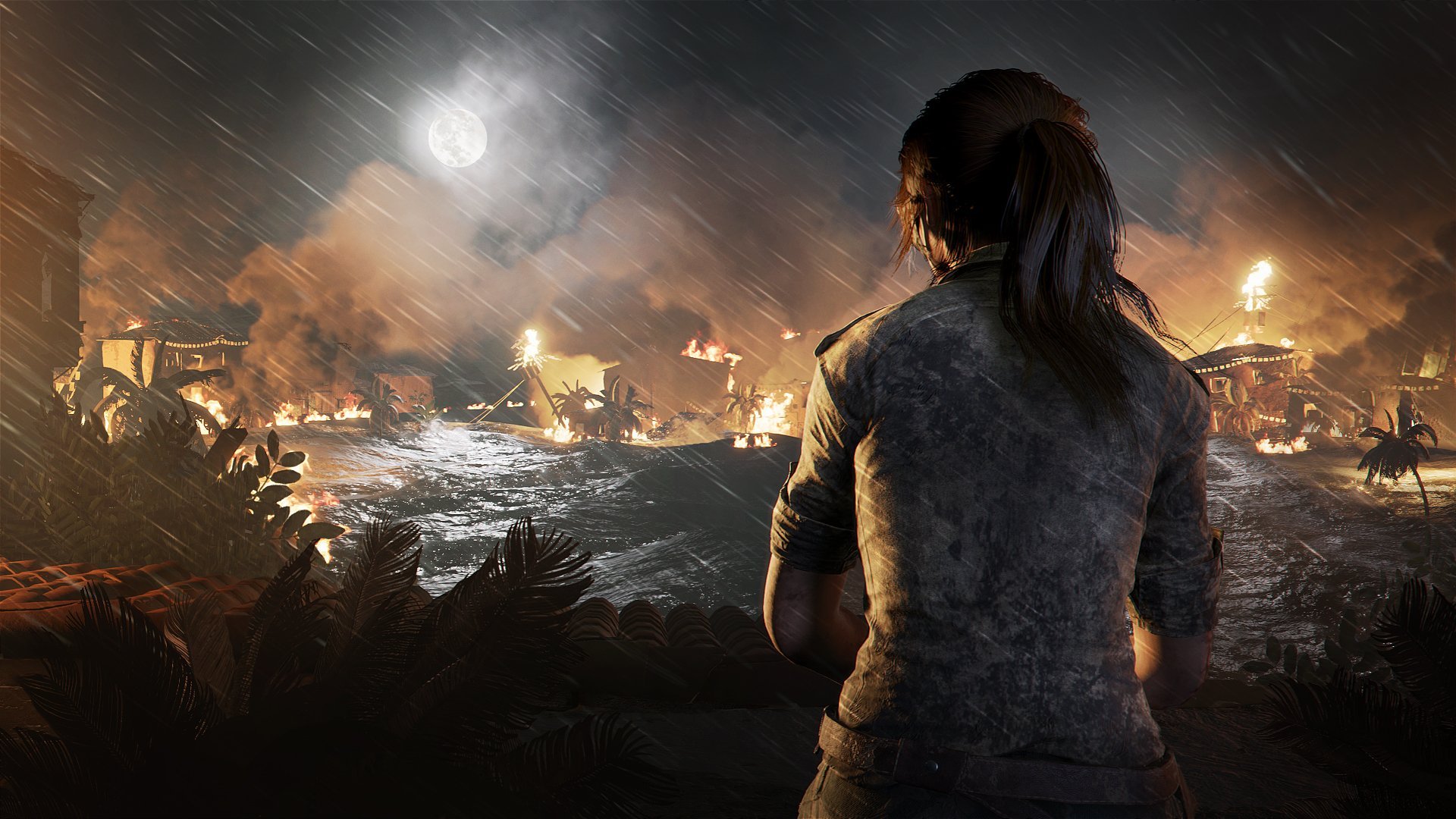 The culmination of all this artifact-recovering and enemy-killing in the demo was bleak for the residents of Cozumel. It triggered a great flood, one that wreaked untold destruction on the quaint town. It served as a grand setpiece, a natural disaster for Lara to save herself from. There’s dismal and undeniable irony in Lara swimming through the corpses of these people who were celebrating the Day of the Dead just minutes prior.

When she reaches safety, Lara’s reunited with a grief-stricken Jonah who yells that she needs to consider the consequences of her actions — that everything isn’t about her. An inevitability of Lara’s arc will almost certainly be that she’s the best at raiding tombs and she’s the best at murdering anyone who stands in her way. Shadow of the Tomb Raider seems poised to be a thrilling conclusion to her tussle with Trinity.

But Square Enix talks about Lara’s personal growth, basically taking the words right out of Jonah’s mouth. Over three games, she has matured into this murder machine. Has she matured emotionally? Has she realized not everything is about her? And does this figure into Lara’s “defining moment?” For now, it’s all as mysterious as the relics Lara hunts.

Shadow of the Tomb Raider releases on September 14 on PC, PS4, and Xbox One.

[Disclosure: Travel and accommodations were provided by Square Enix.]