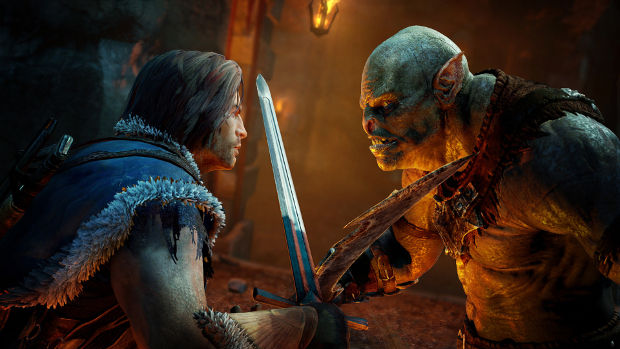 Origins of the rings

[Writers Note: The original story was amended because of number of factual inaccuracies. My sincerest apologies to anyone who was confused by the original article.]

It won’t be long now until Middle-earth: Shadow of Mordor is released. Here at PAX Prime, we’ve been afforded one last look at the game, and while Alessandro and Dale covered the gameplay nitty gritty of the Nemesis system and Assassins Creed style traversal, we’ve finally been given a short, albeit sweet look at the game’s campaign mode.

Monolith is digging deep to tell the lesser known tales of Tolkien’s universe. Get ready for a lot of nerd speak.

You play as Talion, a ranger of Gondor who survives the first wake of Sauron’s attack on Middle-earth. While Sauron’s return has marked a return of evil, his presence also awakens the spirit of Celebrimbor, the master forger of the Second Age who helped Sauron forge the rings of power. Celebrimbor’s spirit ties itself to Talion, giving him powers similar to those of the ring wraiths, including mind control, mind reading, and enhanced tracking. More than a justification for game mechanics, Celebrombor is the vehicle driving Shadow of Mordor’s deep dive into Tolkien lore.

In our demo, Talion is on a mission that has him crossing paths with Gollum, the One Ring’s long time bearer. Because of the deep connection Gollum has with the ring, he notices the wraith spirit of Celebrimbor clinging to Talion. After recognizing the master forger, we’re treated to a flashback of a living Celebrimbor during the second age as he’s creating the rings. Celebrimbor’s spirit does not remember much of his mortal life, so the mystery surrounding his living days are a journey we’ll take with him. As a person who’s only real knowledge of Tolkien’s work comes from films, I find there’s something very pleasing about seeing this history unfold in front of you. While this information does exist in wikis and lesser known works, it’s nice to see this side explored on a bigger stage.

Our demo also included a look at Talion’s powers, watching a sequence where Talion needed to use his wraith form to track Gollum. While the wraith  vision displays in the same smokey black filter as the films, the actual tracking is similar to what we’ve seen in Assassins Creed’s eagle vision. The environment goes dark, while enemies and persons of interest are highlighted in bright colors. The combat also takes queues from the Batman Arkham series’ free flow system. You have a button to attack, a button to counter, and a button to dodge. There is also an equivalent to Batman’s cape stun, allowing you to hit an enemy with a flurry of attacks.

While some games do come around that lay the blueprint for how things will work in a genre, Shadow of Mordor errs on the side being samey. That’s not to say that the combat and traversal isn’t still fun. On the plus side, if you completely blow a stealth run like I did, you have a good combat system to fall back on. Traversal is functional, but when you hit the open parts of the world, not being able to summon a mount makes for lots of plodding through grassy plains. It’s the story really that looks like the star of the show.

Filed under... #Lord of the Rings#Middle-Earth: Shadow of Mordor#Monolith#Warner Bros