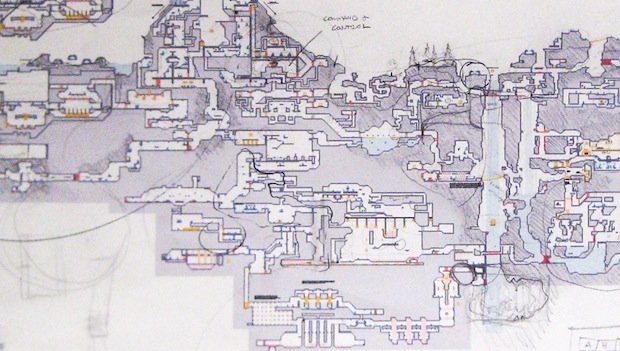 The labyrinthine prison Nathan Drake Jason Flemming navigated to save his woman of interest, Clair, wasn’t designed in a day. Nor was it designed, at first, on a computer. The Shadow Complex team designed the game’s complicated Metroid-style map with their fingers, putting to paper even the little things like every metallic nook and cranny as well as secret and not-so-secret item available in the facility.

MTV Multiplayer is doing post-mortem on the two-month old Xbox LIVE Arcade title and, as you can imagine, the first bit covered is the game’s map. David Mustard and Chair Entertainment handed over an older sketch of the map (of which you can see in full over at MTV) and also shared some thoughts on the design process of the game’s most remarkable feature, the map.

Of course, the map didn’t stay on paper forever, by the way. Chair eventually pumped it into Adobe Illustrator. Still, it’s wonderful to hear about the design process, especially juicy little bits like this. Who knew writing utensils and paper were relevant? I haven’t seen a pen in at least seventy billion Internet years.