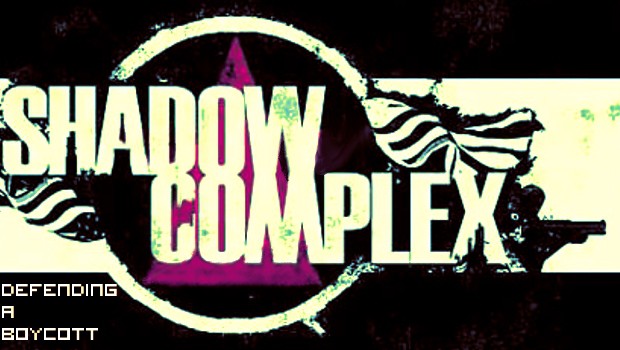 [Editor’s note: We’re not just a (rad) news site — we also publish opinions/editorials from our community & employees like this one, though be aware it may not jive the opinions of Destructoid as a whole, or how our moms raised us. Want to post your own article in response? Publish it now on our community blogs.]
I have not participated in a boycott of Shadow Complex and would neither encourage nor discourage anyone else to do so. However, something troubles me in this recent debate about whether Orson Scott Card’s involvement in Shadow Complex warrants a boycott. It’s when people who comment attempt to trivialize the debate — to insist that it is a non-issue or to call the pro-boycott people stupid, reactionary or hypocrites — that I want to scream forth in their defense these words that I, like Ben Goldacre, have been finding more and more useful lately:

I think you’ll find it’s a little bit more complicated than that.

Here I hope to demonstrate why I, while not participating myself, find a boycott to be a perfectly reasonable course of action. One thing I will not be discussing is whether it is necessary to separate the artwork from the artist. I quickly realistic that this could warrant a whole post on its own, so I have chosen to focus on other arguments here. Briefly, though, I would argue that it is not only unnecessary but sometimes impossible to separate artwork from artist. With that out the way …

First, an issue of semantics. In such debates a lot of words and labels are thrown around and labels are not necessarily useful. The obvious one would be ‘homophobe.’ Is Orson Scott Card a homophobe? He’d insist not, of course, but I certainly follow Jim Sterling’s argument that he appears to be in many respects. As I said, though, labels are not particularly useful here so let’s instead look at some of the words he has said, which can be found in articles that he has written and, for example, in the above linked Salon interview:

“Laws against homosexual behavior should remain on the books, not to be indiscriminately enforced against anyone who happens to be caught violating them, but to be used when necessary to send a clear message that those who flagrantly violate society’s regulation of sexual behavior cannot be permitted to remain as acceptable, equal citizens within that society.”

“I’m amused that you think it [homosexuality] doesn’t hurt anyone. The homosexuals that I’ve known well, I have found none who were actually made happier by performing homosexual acts. Or by withdrawing, which is what they do, from the mainline of human life. The separation is there and is, in fact, celebrated within the homosexual community.”

“They [gay people getting married] steal from me what I treasure most, and gain for themselves nothing at all. They won’t be married. They’ll just be playing dress-up in their parents’ clothes.”

We are dealing with a person who feels threatened by what he calls the gay activist agenda, patronizingly feels that he knows better than me whether I am happy or not and, if he had had his way, would have had the gay ‘educated’ out of me from a young age — and I could go on.

Is he a homophobe? Possibly, but who cares? Is he someone whose words and deeds make me feel fully qualified to dislike him intensely? Certainly, and it is on that basis that I choose to oppose him, not because of any label I’ve hung on him.

Examining an Argument Against Boycott

One of the most common arguments against a boycott is that many other games and other things we indulge in will have been made by people who have views equally or more abhorrent than Orson Scott Card’s and we just don’t know about them. An example was given of the Composer on the Dragon Quest games, someone who denies the rape of Nanking. So the argument goes, if we boycott one then surely there are hundreds of other things we should also be boycotting. I believe there are a few different but interconnected ways to respond to this:

1) It’s true, there are other people with views I would not necessarily wish to support working on games. However, not many of them will be in a position such as Orson Scott Card, in the board of directors for National Organization for Marriage actively campaigning against gay marriage, so there is an argument that by supporting the game we are more directly funding such campaigns than in the majority of other cases.

2) Again, it’s true there may be people I don’t know about who may have similar or worse views but Orson Scott Card is someone that I do know about. I can only possibly act on what I know and it would be most impractical to find out everything about everyone who works for any one company before making a purchasing decision. Since I do know about Orson Scott Card, I can make an informed decision in this particular case, which is the best anyone can ask for.

3) People should be able to pick their battles without being called a hypocrite. Clearly for some people the issue of Orson Scott Card’s political views is of particular importance to them. If they chose to boycott this game but not another game which is made by someone else of different views that they also oppose, maybe that is because this is the battle that is more important to them, this is the stand they want to make. While they may not agree with the views of this other person, it’s just not a battle that they feel strongly enough about to act on in a similar way. I don’t see anything wrong with that — if we decided to make a stand on every single occasion we encountered something we disagreed with, we’d never get anything done! However, that doesn’t mean we must take an all-or-nothing approach.

Why Do People Boycott?

I used to be puzzled by the act of boycotting, because I could see that obviously most boycotts historically have had little to no impact. A handful of people boycotting Shadow Complex won’t significantly impact sales, nor will it change Orson Scott Card’s mind or anyone else’s for that matter.

Now I realize that this is to rather miss the point. People boycott not necessarily because they wish to harm sales or gain some similar result. Rather they do so to make a statement — ‘I choose how I spend my own money and this man/company will be getting none of it,’ — in order to highlight an issue. From the amount of discussion there has been, the issue clearly has been highlighted.

So Why Am I Not Boycotting Shadow Complex?

Honestly? It’s not my style. Perhaps you were expecting something better thought-out by this point but that is more or less it. To me, a boycott is too much like a bludgeon; there’s no finesse or flexibility about it. For example, I think Activision’s behaviour recently regarding trying to block the release of Brutal Legend and comments made by everyone’s favourite CEO regarding game pricing are absolutely awful. For that reason I will think very carefully before buying a game with Activision on the box and will rent or buy second hand where possible. Even though I am not completely ruling out buying Activision products, they will definitely be getting less of my money as a result of their behaviour. Just like the boycotter described above, I’m under no illusions that I’m hurting Activision, I am merely exercising my freedom, albeit in a slightly less hard-line (perhaps even weaker) manner: “I choose how I spend my own money and now I’ll think twice before giving it to this man/company.”

With Orson Scott Card, after Ender’s Game (which I was given as a gift) I bought one more book of his and at the time had such a bad taste in my mouth from what I had read about him that I had trouble enjoying it. I have never been tempted to buy one of his books since and whenever I see a product associated with the man I certainly think twice before getting it. He is surely getting less of my money as a result of his words and actions, because I believe that before I found out about his views I would have bought any book he wrote.

In the case of Shadow Complex I decided I would get more pleasure out of playing it than displeasure that Orson Scott Card will most likely be paid some royalties, so I chose to buy it. Does that mean I am comfortable with his involvement? No, I would much rather he had nothing to do with it. Incidentally, he also wrote the insults for the sword fighting in my beloved Secret of Monkey Island — and I wish he hadn’t. But I am also glad that I took the decision that I wouldn’t let the man deprive me of playing these great games.

All said, the only difference between me and the boycotters is the line they choose to draw, which I completely respect and defend. I hope that if you are someone who has previously called this a non-argument or belittled the ideas of people who believe in a boycott you can now appreciate that it is a little bit more complicated than that.