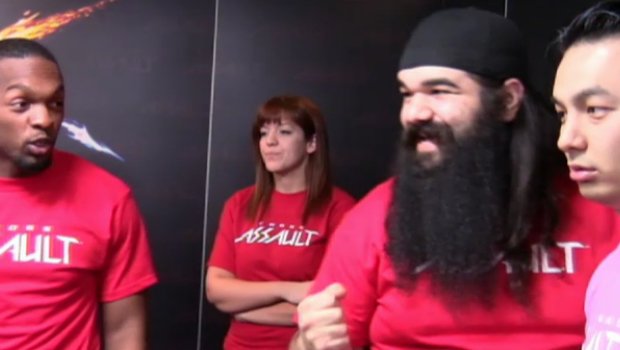 [Update: Miranda felt she was misrepresented as having spoken to Destructoid, due to her quotes not being clearly attributed to her Twitter account. It wasn’t my intention to make it look like anything other than public Tweets, so this has been amended. To be clear, Miranda provided Destructoid with no quotes and everything she is quoted as saying was said on her Twitter profile.]

There’s been a salty offering of drama in the fighting game world recently, with chatter concerning sexual harassment of a Cross Assault cast member. For those not in the know, Cross Assault is a reality show set up by Capcom in which teams of Street Fighter X Tekken players compete for prizes and glory.

Last night, however, things got a little more heated than usual when one player, Miranda “Super Yan” Pakozdi, forfeited a match. The decision to throw the game caused a dispute as to whether or not forfeiting players would be kicked off the show, and how team points would be awarded. However, the thing that really got people talking was Pakozdi’s claims of mistreatment by notorious bearded gentleman Aris Bakhtanians. Ostensibly, he made lewd comments about her and wouldn’t let up.

According to Pakozdi, the hairy team leader sat at the center of a number of comments made during livesteams that made her feel uncomfortable, and he had refused to show any concern when the issue was brought up. Super Yan explained via Twitter that Aris “made my life incredibly hard and hasn’t helped me with that at all. He made it way worse.”

Pakozdi noted that in one-on-one conversations with Aris, he made it “pretty obvious that he doesn’t give a shit.” Naturally, a number of fighting game fans chipped in to let it be known how little of a shit they gave as well.

Fighting game community leader Mike Watson called out Super Yan, saying, “The entire time you were giggling and enjoying the attention. Someone mentions harassment and not until then do you complain?”

Pakozdi replied that she was able to laugh off the sexual commentary from “idiots” watching the stream, but it was Aris who crossed a line with her; she stated that “the things he said/did were not funny at all.”

Some online community members, including many (not all of them, of course) at Shoryuken, have firmly sided against Pakozdi, claiming that Aris was just joking, so she should not have felt uncomfortable. The thread linked above contains some spirited arguments from both sides of the fence, so check it out.

[An example of what Aris said. This was day one of the show.]

Meanwhile, other members of the community (especially at NeoGAF) have criticized Aris’ behavior, and it’s heartening to see that Super Yan received a fair bit of support from the fighting game community. While some members of the FGC believe that their hobby is about singling out women for abuse and making them feel uncomfortable, it would appear that an encouraging number of them actually stand against that kind of shit. Hopefully it goes some way toward disproving the myth that the FGC is full of entitled manbabies … a myth that folk like Aris and Watson have unfortunately propagated in several situations.

Seriously, kudos to what seems to be the majority of the fighting game community for actually being reasonable and cool. It’s something that should be stressed, given how people like Aris clearly see the community as a place where they’re allowed to be assholes, and it would appear that people like him are wrong about that.

Speaking of being wrong, it’s rather concerning that, according to Yan, Capcom knew about Aris’ behavior and didn’t step up sooner. Watching the stream where this whole thing blew up, the whole affair looks like a disorganized public shit-show at best, and the fallout only serves to make it worse. What, exactly, was the company in charge of this show doing while things got out of hand?

Super Yan has since Tweeted that the issue was cleared up and that she’s finished with it, but the debate over what is acceptable banter and what isn’t marches on.

Ultimately, it’s all about what an individual person is comfortable with. If a woman is fine with jokes about her looks, then maybe there’s room to debate, but it’s the fact that Pakozdi brought up her issues and was ignored that makes this a shitty situation. The fact that you can watch the above video, and anybody with common sense can tell that she’s uncomfortable, seals the deal. That cuts off any wiggle room for discussion right there. I used to subscribe to the “jokes are jokes, and offended people should stop being offended” mentality myself, but it’s not a fair way of thinking, really. People have their personal boundaries, and if they’re just trying to get on with business, it’s not right to keep crossing them just because you don’t agree with them.

I’m all for bawdy, tasteless humor — on an impersonal level — but not when someone in the room is unhappy about it. Humor isn’t supposed to make people unhappy. I’ve made jokes or called people things without knowing how problematic and stupid they were, only to be told after the fact. When you’re told, you reevaluate your jokes and recalibrate your word choices for the people around you. It’s called being polite. I sexually harass my colleague Jonathan Holmes on a podcast every week, and the moment he stops finding it funny is the moment I’ll stop doing it. Y’know, because it’s basic etiquette to stop harassing a person when asked.

Some are trying to pass off what Aris did as harmless joking, but it can only be lighthearted banter when everyone’s joining in — otherwise, it becomes victimization. It doesn’t matter how mild one thinks it is, and it doesn’t even matter what the intent is. It’s all fun and games until it’s clear that someone in the room isn’t having fun.

Then you gotta pack that shit in.