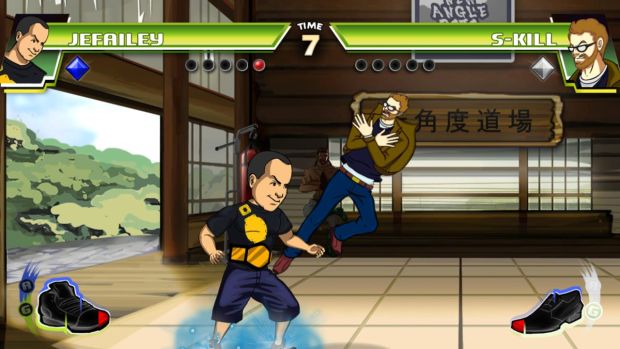 Play as the fighting pro

That’s right! Seth Killian is a playable character in Divekick, the unique fighting game slated to hit the PlayStation 3, PlayStation Vita, and PC later this spring. S-Kill, as he’s called in the game, is one of the harder characters to master as his jump is replaced with a teleporting move instead.

Seth and Adam Heart, the lead designer on Divekick, go way back in the fighting game community, and Seth got to check out Divekick when the initial concept was being created back in the day.

“He showed me a prototype of this game a long time ago,” Seth told me. “I said ‘Obviously this is silly, and you’re having a good time with it, but I think you’re really on to something here.’ This is fun and it legitimately boils down a lot of what’s awesome about fighting games.

Obviously Adam kept at it and after the game got picked up by Iron Galaxy, Seth was asked if he’d be down to be a playable character. “How could I say no?” Seth told me, and the rest was in Iron Galaxy’s hands.

“He’s definitely one of the trickier characters in the game. He doesn’t really jump, he just teleports to different locations around the screen, and then [can] perform the dive. He’s got some tricky moves on the ground, he can parry and then follow that up with a kill. So that’s pretty cool, but overall you sort of have to know where you’re going cause the teleport is not instant. So you have to be pretty quick, but he can really bait opponents out well.”

I have to say, it was a little surreal playing against Seth as a caricature of Seth. Seth himself was pretty happy with how S-Kill turned out, especially as he had no input or say on the design.

“I like him. Hopefully someone wins a tournament someday. You get a free hug for every Divekick tournament that you win with S-Kill.”