Boobs.
Now that I have your attention, I want to tell you what I think about the PC version of Senran Kagura: Peach Beach Splash, a highly sophisticated simulation representing what happens when you put a group of intricately complex, three-dimensional characters in an arena with water guns to allow them to vent their frustrations on one another. More of a psychological analysis than a video game, PBS, much like the novel Haunted by Chuck Palahniuk is something of a deep character study that dissects the frailty of the human condition.

How much violence can we withstand on a psychological level before the barrier of our humanity is broken down, and we are reduced to the baseline of our carnal, primal nature? In what universe would a woman choose a bra or bikini eight times smaller than her bust size and not have it cause her breasts turn into deformed, radish shaped sacks of corn syrup? Why am I playing this game? Why am I even alive at all?

By the end of my experience, none of these questions were answered, obviously, especially the bra bit. But I did learn one thing; Peach Beach Splash is not the Splatoon clone I had assumed it was. In fact, as someone remotely familiar with the Senran Kagura games, it actually doesn’t play much differently from the main series at all. Although personally, I did find it to be less engaging and entertaining than previous titles.

Now for the fanservice folks, it probably hasn’t been any better. This game is utterly shameless in what it sets out to do. Wrapped in a melodramatic narrative where ninja girls are magically whisked off to what can only be described as a “mystical” water gun fight, the story is utterly meaningless, that’s fine — the dumber the better in my opinion, and this is the most notably idiotic narrative I have run across in the series. Perhaps in any series. The narrative segments which break up the gameplay are a tonal rainbow, shifting between dramatic character relationships and endless jokes about titties and fanservice.

Nobody cares, this is what Senran fans have come to expect, and it’s the exact proper way a game like this should be treated; with a healthy dose of snickering and playfulness. This is after all a game with a mechanic that allows you to fill a gun with white liquid and spray a girl in the face with it, a sentence I hope is never discovered was written by me when the college I applied at does my background check later this year. It’s pure, exploitative, ecchi trash fantasy at it’s most profoundly triumphant. If you aren’t sickened by it, you will probably find it pretty amusing. Or maybe somewhere in between.

My only issue with this narrative stuff is just how badly it breaks up each story mission. The loading times were not bad, but there were an excessive number of them for the type of game this is. PBS matches consist of smallish arenas and two teams of five girls shooting one another with water guns until the timer runs out. In the story missions and multiplayer missions, there is a bit of variety thrown in for good measure, but this is the fundamental loop of the game. Matches are generally quite short, so it isn’t exactly break neck in its pacing. I would have liked to have spent more time in the actual game than in dull visual novel segments, or at the very least had them be longer but occur less frequently.

That said, when I was in a match, I found it to be pretty fun. It’s clunky, the ranged combat is less interesting than chaining combos together in the other Senran Kagura games, but it works well enough. Ammo is limited and shared with your other techniques, such as the ability to use a water jetpack to fly around, but just like in real life, when you jerk off your squirt gun enough, it will fill your reservoirs back up. So a lot of close encounter combat will boil down to properly utilizing cover to get enough time to reload, and execute slow, cumbersome melee attacks to stun your opponents, as well as activate the many ability cards you can unlock and customize your character with, one of the highlights of the game. 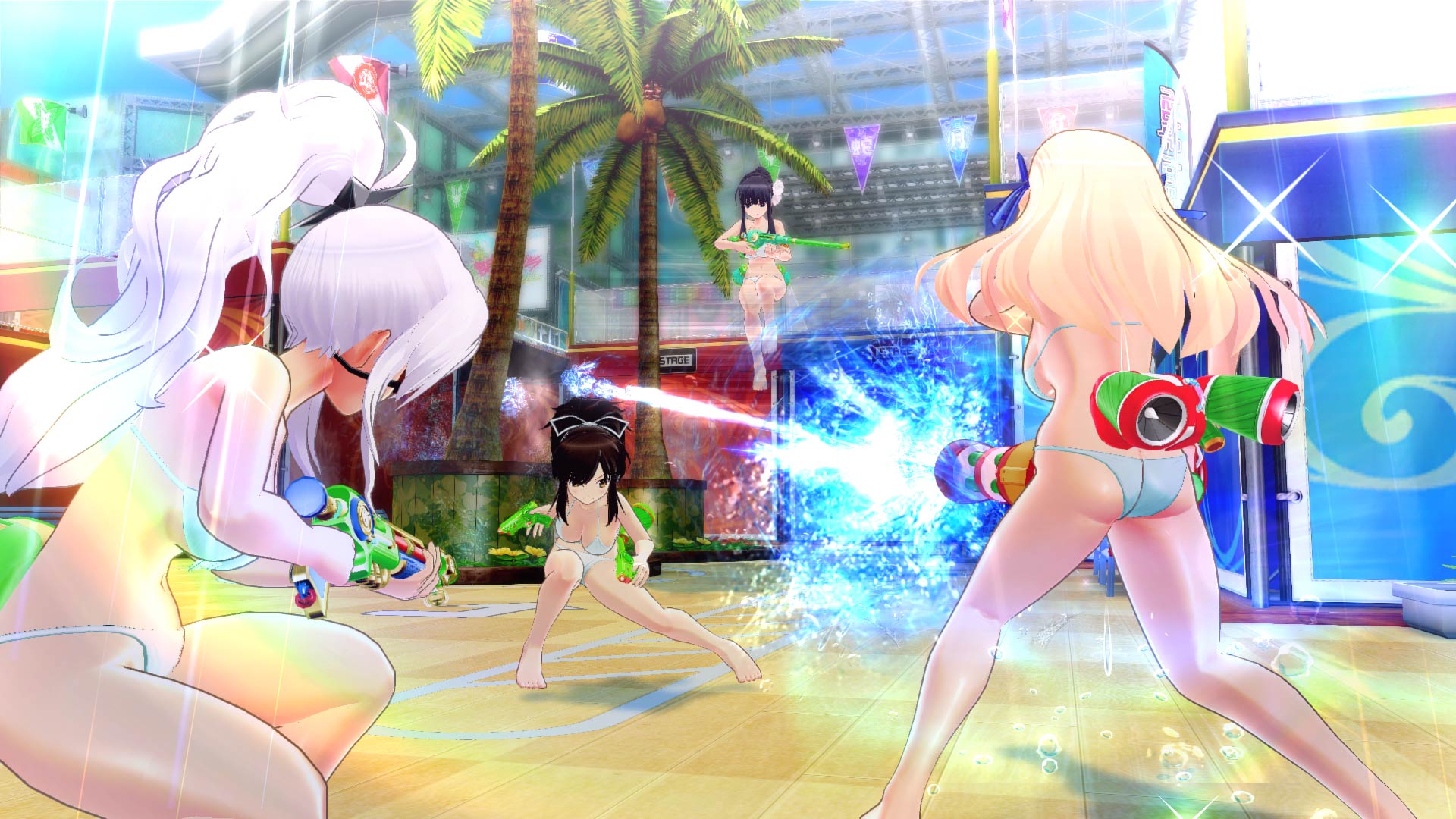 Dan Roemer previously reviewed the PlayStation 4 version of the game and we seem to share the same general opinion on it. Check out Dan’s full review for more details — nothing has changed between the PS4 and PC version as far as I can tell. The PC version, I am happy to say, ran flawlessly for me. Now, my own system is no spring chicken, but the system requirements for PBS are very low. I was able to run it on the highest settings on my GTX 1060, which is good since right now video card prices are as high as ever. I didn’t notice any significant graphical or performance glitches, although I did have an isolated sound glitch occur where all of the games sound effects on the front channel would completely disappear until the match had finished.

PBS is not a game that will push any of your hardware. It seems like it would run comfortably on the PlayStation Vita, apart from the fact that, according to the developer, the Vita has a hard time portraying wet, see through clothing. It truly was a noble decision, but apart from that, PBS is nothing to write home about visually. Character models have barely changed from game to game, animations not related to tits are as stiff as a…watergun, but the game is colorful and plucky, and looks quite nice for what it is.

Online play, much like the console version, is dead as a doornail, and I won’t assume that is going to change tremendously when the game is officially released as that has been a consistent problem with the console version as well. It’s unfortunate as this really is a game designed around multiplayer, but the niche is real. Hopefully PBS on PC can enjoy a more lively online component, but time will tell. I’m sure, at the very least, modders will have a good time further morally corrupting this one, not that the game leaves anything to the imagination in the first place. 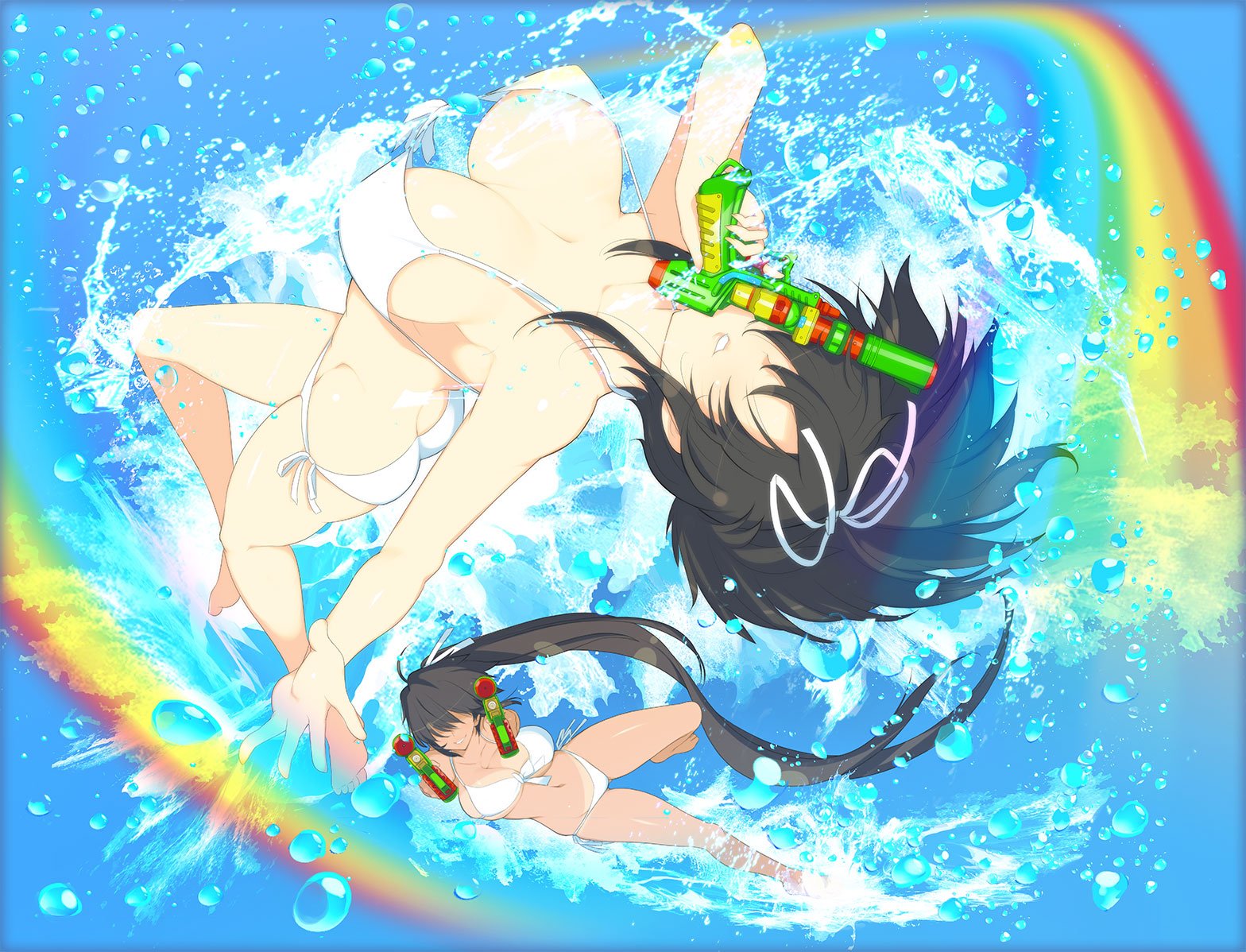 If you are a fan of Senran Kagura series, this entry, while feeling a little simpler in some ways, is a decent alternate take on the franchise. If you are looking for Splatoon on your PC however, as I was originally hoping this would be, keep looking. If you were just holding out for a PC release, I am happy to say Senran Kagura: Peach Beach Splash runs great on the platform. I guess you could say it is “tit for tat” with the PlayStation 4 release.