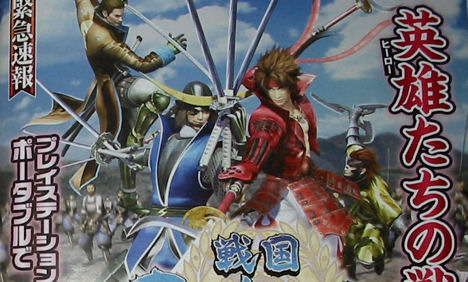 As far as Dynasty Warriors rip-offs went, Capcom’s Sengoku BASARA (aka Devil Kings) looked the most promising, but turned out to be the most disappointing. With balance issues and a ridiculous overhaul between the Japan and Western releases that saw half the characters removed and the plot rewritten, it was a big wobbly let-down.

Still, Capcom is not deterred, and is instead using the BASARA franchise to continue its PSP support with Battle Heroes. Unlike the DW-style hack n’ slash of the PS2 original, this new game is being described as a 2 vs. 2 3D fighting game using the original engine. It is due for a Japanese release in Spring 2009.

I am interested, but the first game really was not up to Capcom standards. It was as if Jeff Lynne had written The Fast Food Song.