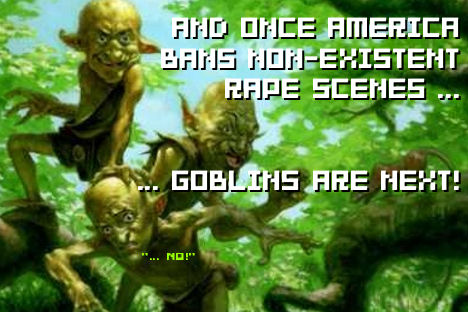 We always knew that these anti-game wing nuts were looking for problems that weren’t there, but never has that idea been so literal. Connecticut State Senator Gayle Slossberg is currently searching as hard as she can for the rape scene in Grand Theft Auto IV, and isn’t about to let the fact that no such scene exists stop her:

[Sen. Slossberg] wants confirmation of the rumored rape scene in Grand Theft Auto IV—but she can’t reach that level of the game. The Milford state senator’s never played GTA, but she fears it’s corrupting the youth and thinks a law requiring better warning labels might be the fix. She told the Nose as much at a Capitol press conference last week…

Slossberg hints she’ll… introduce legislation next session calling for clearer labeling of depraved video games like Grand Theft Auto…  Slossberg’s a bit unsure of how the warning labels might read: “I mean what would it say? ‘This game will make you a sociopath’?”

Well, the stupid woman is going to be waiting a long time for her confirmation, considering there isn’t any rape in GTA IV. I’d burst into my usual vitriolic outrage at this story, but I’m too busy sniggering bitterly at this imbecilic wench to do so. If ever there was a true snapshot of the idiocy of anti-game lunatics, this would be it — an out-of-touch politician trying to play a videogame in the hope that she might see some of the rape she heard about.

Says it all, really.