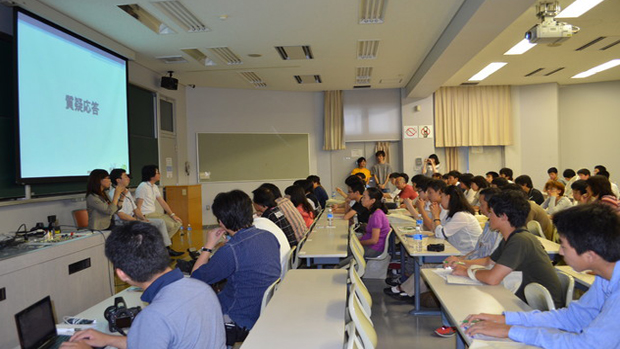 Japanese high school students and their parents got to hear about the nature of the Japanese games industry at a seminar held at the Tokyo University of Industrial Arts. The panel consisted of CyberConnect2’s General Manager Masao Watanabe, Nippon Ichi’s General Affairs Manager Tsubasa Honma, and From Software’s Personnel Manager Reiko Tateno.

Various issues were touched upon, from employment and entry into the industry, to the obstacles that face game makers and the future of the Japanese games industry. I’ve transcribed the discussion after the jump.

The panel members talk about how they got into the gaming industry, illustrating how diverse the backgrounds and entry paths of employees can be. Tateno majored in psychology, and through her dissertation on the positive effects from playing videogames, she became interested in them as a media form. Watanabe’s path was that of a typical game-loving university student who, after graduating, achieved his dream by applying for a small company in his hometown of Fukuoka, 15 years ago, which happened to be CyberConnect, and has been there ever since. In stark contrast Honma was a civil servant who one day wanted to change his occupation in order for a desire to “help people grow”. He saw an ad from Nippon Ichi and got in. He later found out that that ad hadn’t even been up for a week, hence his feeling that timing is an important factor.

Honma identifies temp workers as a current issue. He states that many people think that if they receive a temporary offer, they can sit back and enjoy the rest of university. However, that does not apply with animation, in which many of these temp workers are interested. Nevertheless, with bosses’ encouragement, these workers tend to hit their studies and get a job, thinking, “I would like to see animation that I created myself.”

On the other hand, Tateno highlights the inexperience of applicants and the necessity of skills. She says that when employers look at their application documents, they often get a feeling of “what a waste,” seeing that they’ve never affixed a photo or erased a line off a draft, then hesitate on hypothetical questions in interviews and “eventually giving up on speaking.” She claims that employers want to help them but obviously can’t, and in those moments, they feel that it’s all such a shame.

Watanabe instead focuses on the remarkable nature of interviewees who love drawing, wondering why they want to make games rather than draw for a living. When they say that they feel good from playing games and “want to become the type of person who is able to awaken such feelings in others,” Watanabe thinks, “I want to work with this person.” Whilst finding such intent commendable, Watanabe stipulates that answering the questions “What do they want to do?” and “What do they want to say?” are important and will impress employers. However, “they must never lie, because they’ll end up being exposed.”

In order to continue in the industry

Watanabe talks about the various difficulties that arise as people continue in the industry, particularly when ideas aren’t materializing, or when developers give their all to a game yet the game ends up being boring. At those times, there’s a feeling of despair, but in an instant, that despair can become a positive experience because of all the hard work that was done.

He also says, “Making games is a type of work that requires you to do things that no one has ever done before. Up until you produce and release something, it’s hard. But even then, there is fun to be had. Seeing the game you produced on the shop shelves, there is no substitute for that feeling. When you see someone buying your game, you want to go over to them and give them a handshake. Paying what is never a small amount of money, yet buying so admirably. Of course, I haven’t actually shaken their hands [laughs].”

Honma states that, due to these difficulties in the industry, the number of quitters is considerable. “Making games is something that doesn’t lend well to people who like to be satisfied with their completed work. People quit when they weren’t able to create a game to everyone’s satisfaction. The people who remain, they make games to please and be accepted by everyone, and make it from their hearts.”

Watanabe continues by saying that having people love the games, which the makers made from the bottom of their hearts, is an important point, because in times of difficulty, if the public likes the games, makers are somehow able to keep trying their best. Nonetheless, makers also think that “even if I don’t make games (anymore), I would probably be alright,” and by preparing some sort of “escape route,” Watanabe feels it becomes more difficult to continue working. However, he states that saying “I have nothing but games” or getting too angry is also very bad.

Watanabe also reveals that game creators are not “constant cup-ramen-eating, all-night workers”, but are in fact workers with normal hours. CyberConnect2 and Nippon Ichi start at 9 am, whereas From Software has a flexible hours system but usually asks people to come in at 10 am.

Honma here adds that he would like to employ more “idea men” who can come up with ideas but also perform a wide range of work by themselves, whilst also being able to pass his/her skills on to others. Watanabe identifies reporting, communicating, and consulting as such skills. He also goes on to say that, before going on to make games, they need to gain their bosses’ trust, which is assessed through how they handle their workload over time.

Tateno stresses the importance of finding enjoyment through making games. Honma feels that the starting point is “the thought of wanting to make games that will light up the world,” and then to “take care of the happy feelings from people that you inspire.” In other words, don’t screw with your fans!

Watanabe worries about the “zone of inexperience” in the industry that lies ahead, due to a perceived job age limit on programmers. He says that, in the past, the age limit was 35 years old. Now, it’s normal to see them in their 40s. However, he feels that it’s still not enough and suggests that the way to fight it is “by creating an environment where people who want to make games can still do so even if they’re in their 60s or 70s.” He ends by joking that he wants to make games until he’s 150!

Message to the students

Tateno implores students to never think that any experience or study is a waste. Quite the opposite, in fact. While there’s no problem in constraining yourself to a singular path into the games industry, she wants to promote a more open-minded approach and encourages people to gain experience wherever they can, implying that anyone can work in the gaming industry.

Watanabe asks for students to deeply consider whether they want to get into the games industry, as he thinks it’s your own responsibility to decide your career. He also says to give your all everyday, so you can “stick out your chests” (with pride) in the future.

During the post-discussion Q&A session, questions are asked, such as “What kind of university or university department/course should we attend to get into the games industry?”; “Are there any necessary qualifications?”; and “What should I do right now?” The overall answer for all of these questions is “We are not looking for the university, university department/course, or qualifications on your resume. We don’t care where you get these from. Instead, it’s more important to study hard, increase your life experiences, and become able to fully express your desires.”