[I used to sell stuff on eBay, until it just up and mysteriously marked me as a delinquent account. I haven’t sold my gaming stuff since then, especially after adopting a download stance (unless I’m desperate). I can see now why GameStop can afford to give buybacks such piddly rates: exploring the world of secondhand game sales can attract a shadier clientele, as SpielerDad recounts. ~Strider]

It truly is amazing the amount of crap I have accumulated over the years. You find that special someone, move in together, eventually get married, and one day, you realize that you have no more room to store all your stuff.

When I moved in with the girl who would eventually become my wife, we lived in a tiny fourth-floor walk-up in Manhattan. There was room for the barest essentials. Not like it mattered: rent was expensive and we were just starting our careers, so we didn’t have much to begin with.

However, we climbed that corporate ladder, started making some more money, and were able to afford bigger places and the ability to buy things—many, many things. We moved into a bigger apartment, and after a few years, an even bigger apartment. A few years later, we bought an actual house, just like grownups.

Houses, by their nature, have multiple rooms, even our quaint one. My wife and I proceed to fill those rooms with even more things. Finally, one day, the wife and I were struck at all the shit we accumulated. We felt cramped and suffocated. It was time to unload. We made a conscience effort to de-clutter and downsize. We wanted our space again. We wanted to simplify.

It’s amazing what people will buy on a Facebook Virtual Sale. Things we were willing to throw away, were listed for shits and giggles for a few dollars and to our surprise, people would buy them. People purchased things like old coffee machines, tattered rugs, scratched furniture, and all things we considered garbage. Folks were literally buying our trash.

Simplifying our space even galvanized us to simplify our budget. We took the leap and cut the chord, forgoing cable for just the Internet, and we have not missed it one bit. We became a streamlined household, physically and fiscally and it feels great.

Of course, I did my part as well. There were many gaming related items that I decided to unload. Old physical copies of games, various accessories, consoles, you name it—they were going to be put up for sale.

Selling games and hardware online was not something entirely new to me.  I’ve done it a few times before, but I was more apt to trade things in at GameStop for credit. This time around though, I was going to attempt to get top dollar online for cold hard cash. CAPITALISM! 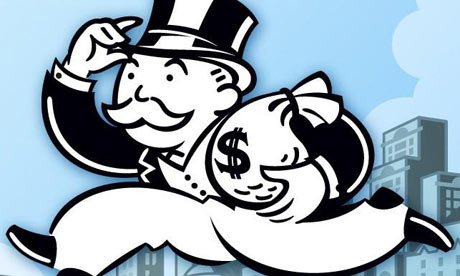 The first thing I noticed is that selling games is going to attract a very different audience than selling a coffee table. Soccer moms are interested in coffee tables, because they read an article in Better Homes and Gardens on how to turn old furniture into shabby chic masterpieces and they are looking to do a project. Meanwhile, freaks, mouth-breathers, criminals, and generally people without a modicum of social skill came out of the woodwork for my gaming stuff. 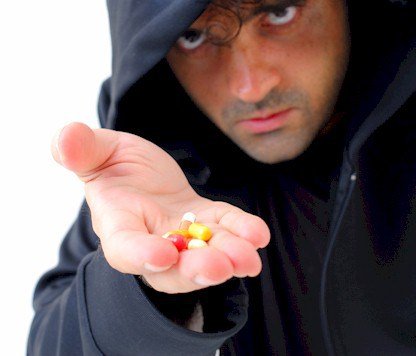 Then there was the guy who wanted to buy a PS4 controller. I was selling the controller for just $30 and it was like new and hardly used, but he kept trying to talk me down. I finally told him that the price was firm and I was moving on to the next person. He capitulated and agreed to meet at a public place. After showing up 30 minutes late, he looked over the controller, and asked if I’d take $25, I took it back and began to walk out when he agreed to pay the agreed upon price.

The weirdos really came out when I listed my Xbox One Elite controller. I used it only a couple of times and realized that my meat hooks and sausage fingers were just too large. I kept hitting the bumpers accidentally and removed them. I paid a premium for what is essentially a nicer Xbox One controller, so I decided to pack it all up, put it back in the box, and list it on Craigslist. This was a mistake.

The Elite controller is a hot item, apparently. It’s pretty much sold out everywhere. Not to mention, the one I was selling was practically new and listed for $125 (a savings of $25). I started getting responses immediately.

Craigslist is supposed to act like a local classified. I would post to the North Jersey page and people from North Jersey would find my post and then contact me, right? Why then, are there people from the next fucking state responding to my classified?

This guy was my first respondent, so I was relatively nice to him and simply told him no. He tried to get someone local to meet me, but could not work it out, which is a shame, because the guy seemed normal, so I moved on.

The next guy was possibly illiterate, as he kept asking me questions that would have been answered if he simply read my post. He also was trying to lower the price, which was firm.

He finally agrees on the $125 price, and we make arrangements to meet. Then I get the following text. 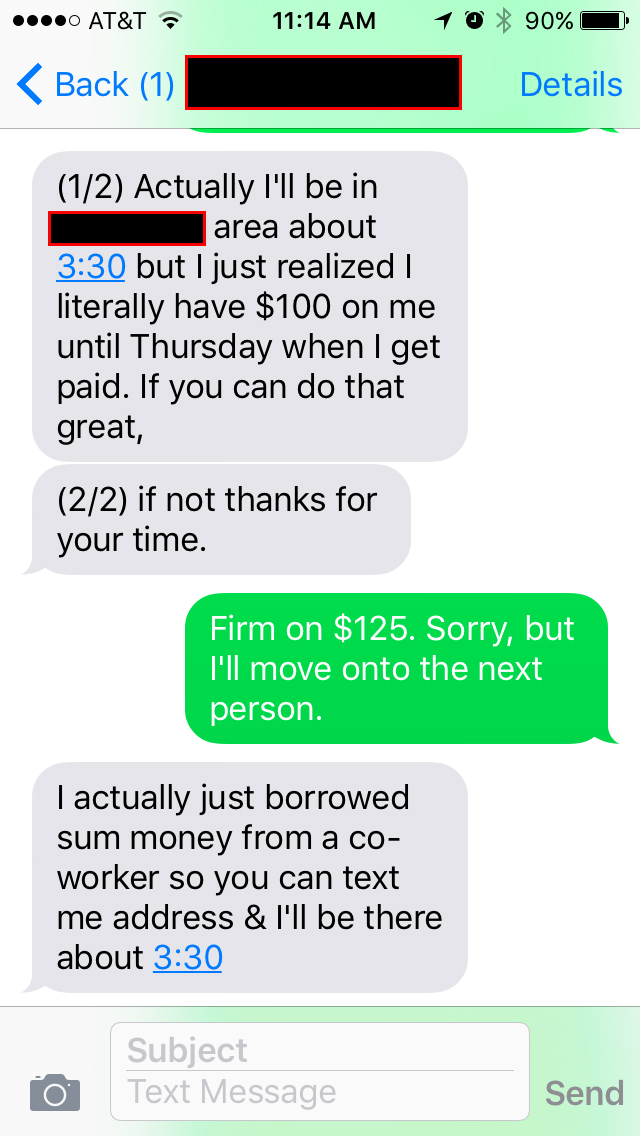 After all this back and forth, he flakes out and asks to meet at later times. Twice. I know that shit happens, but this deal became too sour in my book and I moved on to the next person. What’s funny is that this flake never contacted me again. It was like I dreamed the entire thing.

Luckily, the next person in line was normal. He agreed on the price and location, got there early, and was pleasant. No muss, no fuss.

So, happy ending, right? Not necessarily. I forgot to delete my Craigslist post and got a few more responses, including this gem. 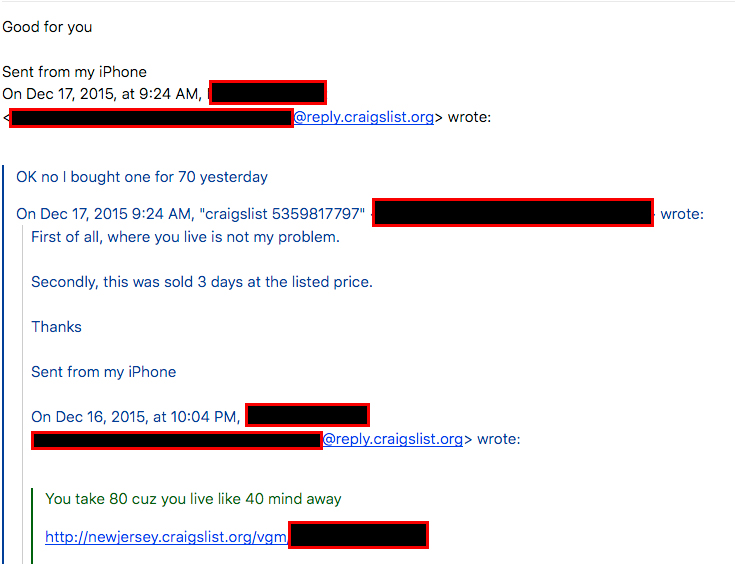 This dude struck a nerve with me. I love the written word and take umbrage when people butcher it. 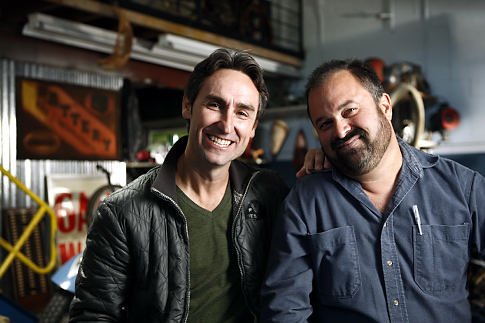 I especially like how in the end, he throws in how he already bought one for $70 and was no longer interested—all this in a span of eleven hours, in the middle of the night. Some people just feel the need to make it seem like they won. So I did what I do best: I gave a passive-aggressive sarcastic response.

Fortunately, I think I’m done selling stuff, at least for a little while. The wife and I feel like we purged enough. When the time does come to unload more stuff, I think I’ll avoid Craigslist. It’s not worth the aggravation. Simply put, it’s a wretched hive of scum and villainy (gratuitous Star Wars quote).

Have any horror stories of selling used games online? Let me know in the comments.