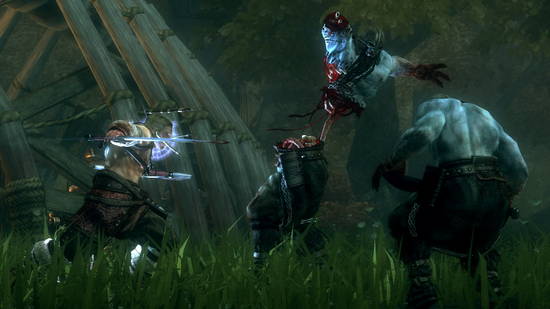 Sometimes I’m a simple man, and these new screenshots for Sega’s Viking: Battle for Asgard certainly speak to my baser instincts. In one screen there’s a giant troll, all battle scarred and dripping with blood. In another screen the game’s protagonist Skarin decapitates an enemy, and another shows him tearing through a torso, exposing what appears to be intestines. Finally, there’s some menacing looking chick wearing a tight leather strapless outfit.

What more can you ask for in this battle between mortal and gods in Asgard, the realm of the Norse Gods? I mean, there’s a story here involving Odin, Freya, and friends … but who cares? You can slice a dude in half, bro. And that chick? She’s totally wearing a strapless leather outfit, dude.

The single-player hack and slash adventure of Viking: Battle for Asgard ships on March 25, and will be available on the Xbox 360 and PlayStation 3. Oh, and did I mention it’s rated M?